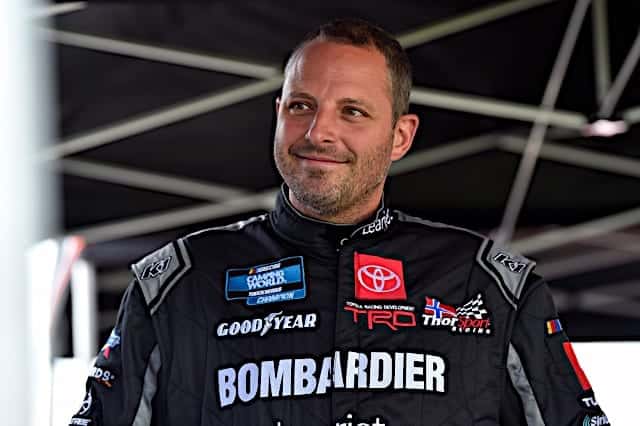 The 2016 NASCAR Camping World Truck Series champion had experienced two consecutive lackluster seasons, missing the playoffs in both 2020 and 2021. He was in the headlines for radio outbursts, not wins. He wasn’t having fun, it was more of a job.

Thursday night (April 7) in the Blue-Emu Maximum Pain Relief 200 at Martinsville Speedway, it felt different in the best way possible.

“It was fun. It’s been awhile, just so proud of everybody at ThorSport,” Sauter said after his first race with the organization this season and best finish in over two full years. “This is our first in-house chassis, in-house body complete. I called for an adjustment early in the race to just tighten it up a little bit and at the end it was just too much. This is the way it’s supposed to be, this is what this whole deal is about: to go for wins.

“To start shotgun on the field and finish second, that’s a solid day,” he said following his 11th top five at Martinsville. “I knew it was gonna be good, I knew on lap 2 we had something we could race with. I’ve been doing this long enough to know. I wish I didn’t call for that adjustment. Who knows, you think that’s enough but all in all a solid night. The goal was to win and we just came up one spot short.”

Earlier this winter, Sauter was reported to run six-eight races for ThorSport, in addition “up to 13 races” with G2G Racing. No specifics surrounding his schedule were announced, but Martinsville, a place he’s won four times (most recently in 2018) made sense for his 2022 debut.

“The whole plan was to run anywhere upward of eight races, maybe less. It’s kind of up in the air,” he said. “We kind of just cherry-picked the race tracks that I like and maybe one or two that Bud and (Junior) Joiner (crew chief) like. Hopefully it’s more than less, but it’s just fun to be with guys who really want to get it done.”

Joiner, who spent the last decade atop the pit box for Matt Crafton, was lured out of semi-retirement to call the shots for Sauter in his limited schedule this season. Sauter vibes well with the firey personality that Joiner is, and has going on 10-plus years now.

“He’s fun,” he said with a chuckle. “Even when we weren’t working together, we had a lot of fun together. He’s a very enthusiastic kind of guy, it’s fun to be around people like that who want it.”

As is customary at Martinsville, fenders were bent and feelings were hurt. Sauter escaped that for the most part, though, bobbing and weaving his way through the entire field relatively unscathed.

“There were a couple times in the race tonight I thought I was getting wrecked,” he said. “Couple times I made some mistakes in traffic too.”

The glaring one came early in the race while battling Hailie Deegan for 22nd place.

But overall, Sauter left the race track with a smile on his face and feeling good. Something that had been missing the last couple years with this very race team in this very series.

“There’s no question the last couple years haven’t been up to standard,” he said. “It’s cool to take a step back and get reinvigorated and have fun, this is what this is all about.”

Still, though, he isn’t allowing himself to rest on his laurels. More is on the horizon for the No. 13 team.

“To come here, get no practice, start shotgun on the field and end up second, that’s a solid day,” he said. “But I know what the group of guys working on this truck are capable of, and second is just not good enough.”

Sauter’s next race is TBD, but he told FOX Sports post-race he hopes to be back in the truck for ThorSport at Texas Motor Speedway on Friday, May 20.