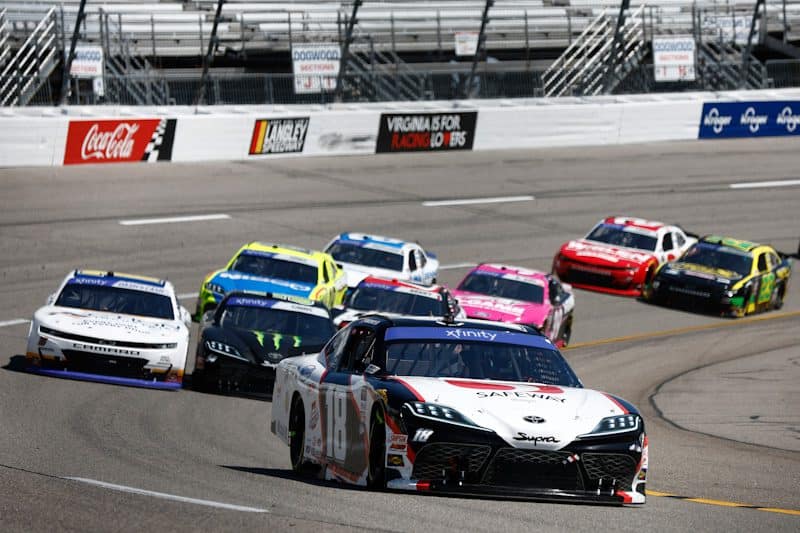 Ty Gibbs took home the checkered flag yet again on Saturday (April 2) in the ToyotaCare 250 at Richmond Raceway, marking his third win of the 2022 NASCAR Xfinity Series season.

John Hunter Nemechek, Sam Mayer, AJ Allmendinger and Riley Herbst rounded out the rest of the top five, after Herbst made a late move on  Ryan Sieg to finish off an impressive drive for him on the day.

Youth reigned supreme in this one, with 19 year-old Gibbs taking home the checkered flag and 18 year-old Mayer winning the Xfinity Dash 4 Cash $100,000 bonus. Those weren’t the only young guns to have a great outing.

Parker Retzlaff does not have the best team or equipment on the circuit — that’s no secret. However, the kid can drive, and he showed that today with a top-10 finish, if just barely. Retzlaff’s finish marks the best result of his young career. During the race, broadcasters mentioned that when the 18-year-old started the season, he had a group of part-timers on his pit crew and even more lackluster equipment than the team does now. However, after realizing what kind of talent Retzlaff had, RSS Racing decided to give the rookie more to work with, and it paid off today.

$100,000 is a lot of money to anyone, but it’s especially a lot to an 18-year-old kid, NASCAR driver or not. Mayer is another young driver that has strung together some successful drives so far this season, but hasn’t quite been able to capitalize with a win just yet. Even though he didn’t take home the checkered flag, there’s no doubt Mayer will be somewhat content with a top three and a fat check.

There were a few this week, but none stuck out quite like Nemechek. He led for most of the race, but in short-track racing, being the race leader when the white flag races isn’t all it’s cracked up to be. Gibbs was hot on Nemechek’s bumper, and by hot on it I mean slamming it. Gibbs bumped Nemechek up the track and put the slide-job on him to take the win. Nemechek was less than thrilled post-race.

TEAMMATES FIGHT FOR THE WIN AND TY GIBBS GETS IT DONE.

Retweet to congratulate @TyGibbs_ on his NASCAR Xfinity victory at Richmond!

From his postrace media session, John Hunter Nemechek: “When you flat out miss a corner and pretty much drive through someone, I wouldn’t call that racing.” pic.twitter.com/io0n398Zls

Noah Gragson had a rough day at the office to say the least, and it started fairly early on in the race with a brake issue that kept him out of contention all day long. He finished the race a lap down just a few weeks removed from taking home his first win of the season at Phoenix. It’s been all or nothing for Gragson so far on the year, and the team is undoubtedly trying to find some more consistency out of their highly talented driver. They didn’t find it today, but to Gragson’s credit, he did manage to cross the finish line. Any day you can drive one back onto the trailer, it could always be worse.

Not only did JR Motorsports take home the Dash 4 Cash this week, but they also take home my highly prestigious (to me, at least) award for the best scheme in the field.

Short track and amazing looking @tirepros ride sounds like a great opportunity for us this weekend! Can’t wait to get to @RichmondRaceway after a tough couple weeks. One of my favorites!! pic.twitter.com/fUcu0H9oXv

Whenever I was a kid playing the yearly NASCAR game, I always designed my own car with a fresh-looking black and red scheme. In my mind, any red paint, particularly candy red, still adds at least five horsepower, and I like to think that some NASCAR drivers think the same. If that’s the case, Josh Berry‘s Tire Pros look on this week’s No. 8 JRM Chevy needs to go through tech one more time, because this is a slick scheme.

With Gibbs taking home another win, the playoff picture isn’t affected as much this week. There are still plenty of races left, so more interesting playoff pushes are certain to come, but for now, the current Jayski.com window has Gibbs, Austin Hill, Gragson and Allmendinger locked into the playoffs.

With the emergence of Retzlaff and several other rookies onto the circuit, one thing in particular is becoming more common. Retzlaff has a few ARCA series starts, and none in the NASCAR Camping World Truck Series. What he does have, however, is plenty of iRacing starts.

With the sport in such a state of transformation, could this be the future of driver development? It makes sense from a cost-effectiveness standpoint. When the craze began hitting the professional level, plenty were skeptical of the actual effectiveness of the program and how much it would transfer over into the actual seat of a car, but if Retzlaff can do it along with several others, who’s to say this couldn’t be the way forward for teams looking to stay on the cutting edge of driver development?

Only time will tell, but as expensive as a good iRacing rig is, it’s still a whole lot cheaper than a race car.

Next up on the schedule is a trip to Martinsville Speedway. Gragson won the last Xfinity race at Martinsville as part of the 2021 playoffs, and if he can do it again, he’d join Gibbs as the only driver with multiple wins on the Xfinity season.

The green flag flies on Friday, April 8 at 7:30 p.m. ET, and will be aired on Fox Sports 1 and the Motor Racing Network.