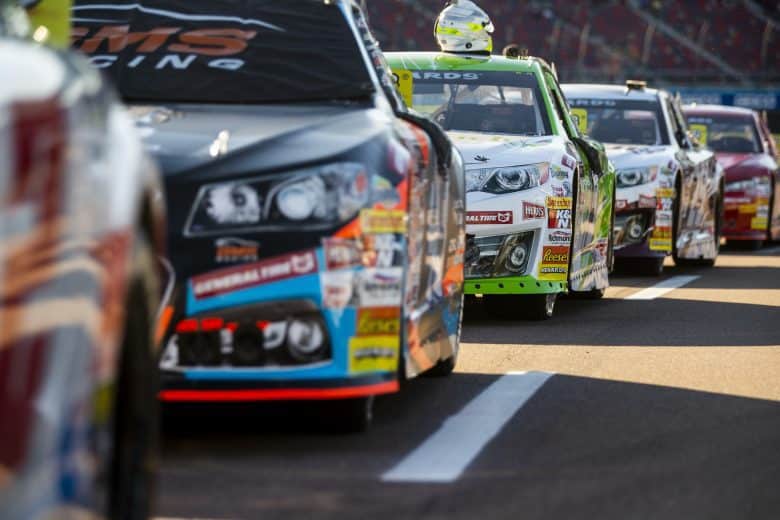 This ARCA field is deeper than last year’s, with 13 drivers already having competed in both ARCA events. While that amount will decrease as Parker Chase is only running part-time and uncertainty about Bryce Haugeberg‘s slate, this ARCA field is talented.

With both higher quality and quantity of ARCA drivers, who will become the next ARCA first-time winner?

Here are some candidates.

In his seven starts, Caruth has completed all but one lap, so he knows how to keep his racecar clean. Now the trick is to lead laps.

Fortunately, he has veteran Brad Parrott as his crew chief as well as a more experienced ARCA teammate Nick Sanchez.

Caruth already competed at Iowa last year. He finished ninth after starting 12th, finishing on the lead lap as Ty Gibbs dominated that race. Without Gibbs in the field, the list of contenders should increase, so Caruth could celebrate his first ARCA victory at Iowa.

Sammy Smith will not compete in another main ARCA event until June 11 at Iowa. Then, he will be 18 years old, so he will contest the rest of the main ARCA schedule.

In the meantime, Smith has already won twice in the ARCA Menards Series East.

Make that ✌️ in a row in the East Series@sammysmithSS | @KBMteam pic.twitter.com/eraVY5HJ6Y

As the defending series champion, he has certainly contended in his 10 East starts with five victories, nine top fives and nine top 10s.

When Smith returns to the main ARCA competition, the other drivers will be on high alert. Smith has been fast in his four main ARCA starts, scoring three top fives and one pole win.

Smith’s outstanding East resume will immediately help him. His next three main ARCA starts will be at short tracks Iowa, Berlin Raceway and Elko Speedway. It is a good wager that Smith will take home his first main ARCA trophy by those three races.

Regardless of his part-time status, Chase has steadily progressed in his ARCA tenure. He scored his career-best finish of second place in this season opener at Daytona International Speedway, and he has two top fives and six top 10s in seven career ARCA starts.

More impressively, Chase has qualified inside the top 10 in six of his seven starts, starting a career-worst 13th last year at Bristol Motor Speedway. Chase knows how to qualify well; the question then becomes whether he will continue running upfront?

Chase’s background is road racing, but he has improved at ovals too. Running nine ARCA events this year, Chase could be a threat to win at Charlotte Motor Speedway. Last year, he qualified second for that race, and a late-race pit stop helped him drive towards the front to finish fourth. With that race-winner Gibbs in the NASCAR Xfinity Series competition, Chase could celebrate his Memorial Day weekend with his first ARCA win at Charlotte.

Greg Van Alst has repeatedly reiterated his primary goal this year is to win an ARCA race. Yet out of all the championship contenders, he has started off the worst. Van Alst finished one lap down in 22nd place at Daytona, then wrecked out to a 36th place finish at Phoenix.

Van Alst upgraded his team’s equipment this year, so he ought to be a threat to win at all ARCA races this season.

One of those upgrades is a road course car, which Chase Briscoe drove to win the ARCA Menards Series West race last year at Sonoma Raceway.

Got the new Van Alst Motorports shop functional this weekend. Lots still to do. This is huge for us. We will be able to work on more than one car at a time.

Van Alst also has his eye on Talladega Superspeedway. He told Frontstretch he looks at that race as redemption after he finished lower than desired at Daytona this year as well as wrecked out while running inside the top 10 last year at Talladega.

Van Alst is no stranger to late model competition as he won the 2019 ARCA CRA Super Series championship. Couple that with his second-place ARCA finish last year at Winchester Speedway and Van Alst certainly figures to be in contention when ARCA journeys to short tracks this year.

Andy Jankowiak only runs a part-time schedule, but his ARCA results have been stellar thus far. He has five top 10s in eight career starts, with a career-best finish of sixth at Daytona this year.

Of those five top 10s, Jankowiak has improved upon his starting spot four times. If he improves his qualifying position, Jankowiak can find himself in contention.

Last year at Talladega, Jankowiak gained 20 spots en route to a seventh-place finish. Ever unpredictable, if Jankowiak can qualify well at Talladega this year, he can find himself with a shot to claim his first ARCA trophy. He is chasing those this year, too.

@DAYTONA In the books 📚

Had a great car all weekend

Super proud of my team and all the people involved in keeping the story going!

Let’s chase some checkered’s this year! 🏁🏆

These five drivers all could visit the ARCA victory lane this season. It is also quite possible someone else could become the next ARCA first-time winner. Toni Breidinger paced the field during the Daytona practice before finishing ninth. Venturini Motorsports is phenomenal at superspeedways. Could she pilot her No. 25 to a win at Talladega?

Whoever becomes the next first-time ARCA winner will also earn a statistical award. That individual will become the 350th difference winner in ARCA history.

The next ARCA race will be the General Tire 200 at Talladega. It will take place on Saturday, April 23 at 1 p.m. ET with TV coverage provided by FOX Sports 1.