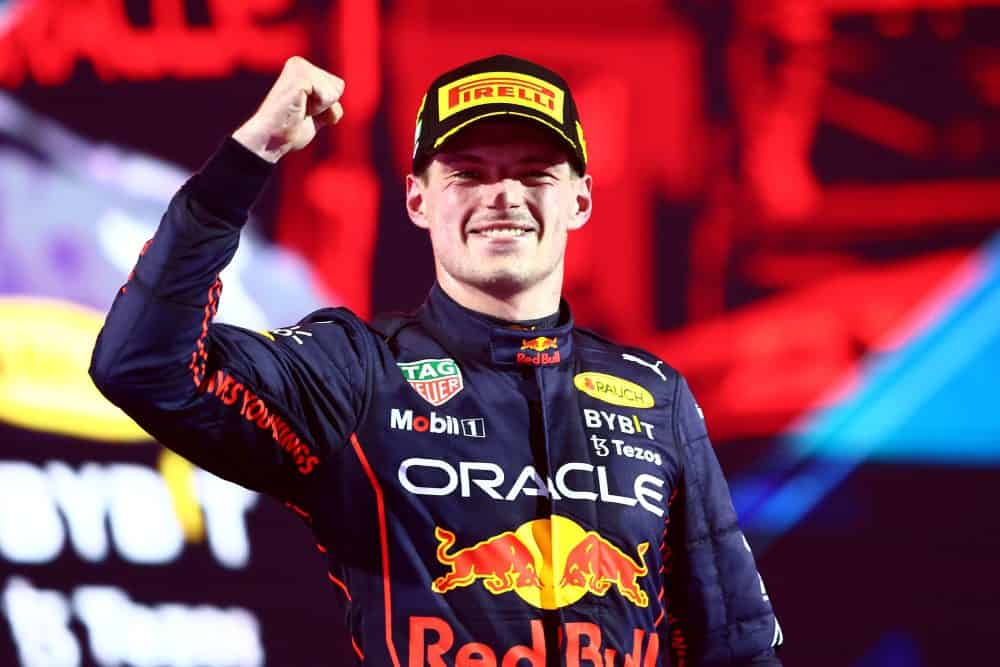 Max Verstappen rebounded from his misfortune in Bahrain by sweeping the 2022 Saudi Arabian Grand Prix out from under Charles Leclerc Sunday (March 27) after a late virtual safety car bunched the field up with 10 laps to go.

Verstappen now has 25 championship points to his name after retiring in the closing laps of the season opener due to engine trouble.

“We were playing mind tricks in the last corner, but we eventually managed to get ahead. But then even after that, [Leclerc] was constantly in the DRS,” Verstappen said.

“But… really happy that we finally kickstarted the season!”

Verstappen and Leclerc, much like in Bahrain, spent the last fifth of the race swapping the lead back and forth around the Jeddah Corniche Circuit, employing a few mind games regarding DRS zones in the process.

After backing off from overtaking Leclerc in the final corner on lap 47, Verstappen made the overtake into turn 1 and never looked back. The Dutchman beat Leclerc to the line by 0.564 seconds – the closest winning margin since the 2020 Italian Grand Prix.

The early stages of the race were shared between pole-sitter Sergio Perez and Bahrain winner Leclerc. Perez made a solid getaway from pole position and looked comfortable in the lead, with Red Bull engine a straight line speed advantage over Ferrari.

Perez pitted on lap 16, while Leclerc, Verstappen, and Carlos Sainz stayed on track. Not one lap later, Nicholas Latifi’s Williams clobbered the wall exiting the final corner, bringing out a safety car and leaving Perez to restart behind Leclerc.

Further, Perez was penalized for unfairly passing Sainz under safety car conditions while the Spaniard exited pit lane. Perez gave the position back immediately after the green flag flew, and never challenged Sainz for third-place from that point.

Despite going more or less unchallenged before the late VSC, Leclerc and Ferrari’s massive pace through Jeddah’s winding first sector was neutralized by Verstappen and Red Bull’s engine advantage through the rest of the lap.

Attrition was an issue of concern throughout the race, though without the unilateral focus on Red Bull engines that was seen in Bahrain.

Fernando Alonso and Daniel Ricciardo were both struck with power issues within a lap of one another (laps 36 and 37, respectively) and stalled in the lane used to access the pit lane. These issues resulted in the virtual safety car being displayed. During the virtual safety car period, Valtteri Bottas made two pit stops in three laps, then retired his Alfa Romeo machine on lap 38.

Lewis Hamilton salvaged a particularly bad hand of cards from Saturday’s qualifying, rallying from 16th on the grid to running in the top five late in the race. However, the aforementioned poorly timed virtual safety car – a la Abu Dhabi 2021 – resulted in the pit entrance being closed for the entire virtual period. It resulted in Hamilton having to pit under green flag conditions, only managing a tenth-place and one championship point in the end.

A bad day for Williams wrapped up when Alexander Albon joined his teammate Latifi in retirement, colliding with Lance Stroll on the entry to turn one on the penultimate lap.

Yuki Tsunoda was ruled out of the race after an engine issue struck his AlphaTauri roughly 30 minutes before the formation lap during a pre-race reconnaissance lap.

Next on the F1 calendar is the Australian Grand Prix, to be held on the Albert Park Street Circuit in Melbourne. Coverage will begin Sunday, April 10th at 1:00 am ET on ESPN.