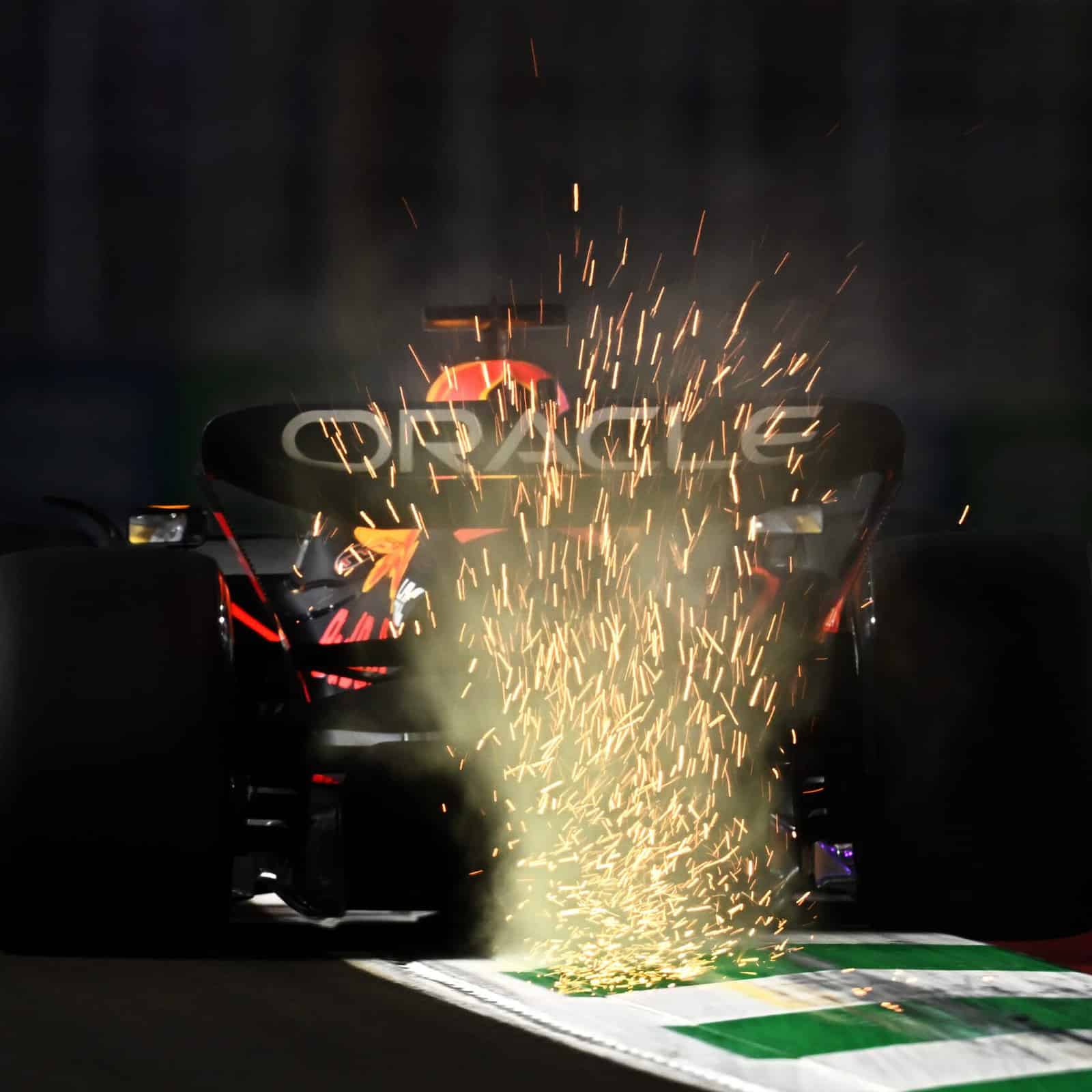 JEDDAH, SAUDI ARABIA - MARCH 25: Sparks fly behind Max Verstappen of the Netherlands driving the (1) Oracle Red Bull Racing RB18 on track during practice ahead of the F1 Grand Prix of Saudi Arabia at the Jeddah Corniche Circuit on March 25, 2022 in Jeddah, Saudi Arabia. (Photo by Clive Mason/Getty Images) // Getty Images / Red Bull Content Pool // SI202203250569 // Usage for editorial use only //

As Formula 1 took to the Jeddah Corniche Circuit for the first practice session of the Saudi Arabian Grand Prix, the sport faced a troubling challenge in the wake of a Houthi attack on an Aramco oil storage facility.

The Saudi Arabian GP had already faced scrutiny when the series visited the track for the first time last December.  Now, just three months later, the grand prix has become a recognizable target for the Houthis to bring attention to their treatment by the Yemeni and the Saudi Arabians.

While this issue is far beyond the scope of an F1 column, the Houthis, originally a moderate Islamist sect, have grown more radical since the US pushed for more involvement in the Middle East beginning with the Gulf War in the 1990s.  Since that time, the group has become more radical and sought to carve out its own existence–sometimes in fighting directly with US interests.

In this regard, the attack on the Aramco facility is an obvious attempt to frustrate US oil interests as it moves away from using Russian petroleum.  The timing of the attack, when tourists and one segment of the media (sporting) would be a notable presence, encourages a recognizable magnifying lens.  (Would this column even be mentioning the Houthis had they not attacked the facility on Friday?)

With the facility a mere 20 miles away, the drivers and team principals were well within their right to question whether the race weekend should continue.  An initial objection was brought by the drivers after the first practice session.  The FIA set up a meeting following the second practice session and after more than four hours of discussion, the governing body announced that the GP would go on as planned.

This situation brings to the fore a whole new host of concerns regarding the sport and how it decides where to race, and humans rights issues, and all the stuff that has circulated for the past decade.  But the real issue here is driver, team, and fan safety.

Has the Saudi Arabian GP become a target?  Can the drivers feel safe?  How high are the cortisone levels in the drivers and team members as the sport moves forward especially after Yahya Al Saree, said in a tweet that a statement will be issued in the coming hours regarding a wide operation “deep” in Saudi Arabia?

While the racing is the main story for the sport, the Houthi attack changed the narrative to something more serious and now a pall hovers over the second running of the Saudi Arabian GP.  Let’s wish for the best that things go smoothly the rest of the weekend.

– Ferrari really do look to have something going to start the season.  Charles Leclerc backed up his stellar performance at the Bahrain GP by leading both practice sessions.  His teammate Carlos Sainz also held steady by being fourth quickest in the opening session and third in the second.

Even though the reigning champion Max Verstappen managed to finish second in both practices, the rise of the Ferraris to maintaining their positions at the front is the big story to start the season.  There was nothing that suggested that their performance in Bahrain was a one-off but the team has been so erratic over the past decade that questioning whether the team would show the same speed is to be expected.

At the moment, Ferrari look to have a bit of an edge, but one that is almost minuscule.  Still, the Tifosi must be elated to see the team in the running for another pole and win.

– While Ferrari and Red Bull have hit upon something with their 2022 car designs, Mercedes is still floundering, or should that be porpoising?  Their cars could again be heard audibly skipping across the track as the downforce loads fluctuated.

For a team that had stated that they were putting so much of their focus on the development of the 2022 car during the 2021 season, this performance issue comes across as nearly absurd.  Having dominated the past eight years of the sport and then to miss so badly on the design of their new car is a statement that someone at the Brackley works missed a calculation or two somewhere.  Still, the team is hovering only about five or sixth-tenths off the pace, which indicates that their motors are still putting out the necessary speed only that they cannot control it yet.

– Nico Hulkenberg is making his second straight start for Aston Martin as Sebastian Vettel will stay in Europe to recover from his bout with COVID.  Hulkenberg was a last-minute replacement for Vettel last weekend and it would be easy to criticize his poor performance on not being acclimated to the car.

The truth is that the Aston Martin looked a bit lost in general as full-time driver Lance Stroll struggled mightily and finished 12th.  It is a rough start to the team and if the performance continues to be suspect there will be more reason to look at team principal’s Otmar Szafnauer resignation and then jump to Alpine at the beginning of 2022.

– Kevin Magnussen suffered through a rough day of practice–a return to reality after returning to the sport and taking fifth at Bahrain.  His Haas was felled by hydraulic issues in both practice sessions, making it difficult for him to gauge the speed of his car while also completing only 15 laps total for the day.

Should Haas figure out the issues and get his car back to a solid working order, the race weekend looks like it will be a tough one to find the same kind of success he found a week ago.  Teammate Mick Schumacher looked slow on the day and the Ferrari-powered cars did not seem to be keeping up with the similarly powered Alfa Romeos.