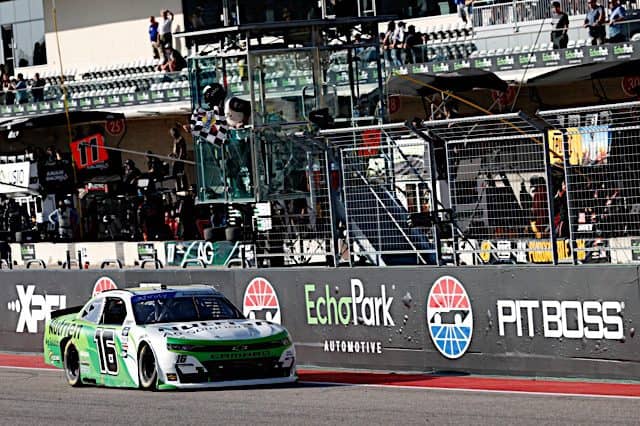 AJ Allmendinger was on cruise control all day Saturday at Circuit of the Americas as he led more than half the race and won the first stage en route to a victory in the Pit Boss 250 for the NASCAR Xfinity Series.

When you're THE road-course ace, it's a done deal!

Allmendinger’s road-course experience from Champ Car, IndyCar and IMSA served him well as he took the lead from polesitter Ty Gibbs early and held off all challengers to win the first stage.

While Sam Mayer won the second stage, it was all Allmendinger from there as he fended off challenges from Cup regulars Cole Custer and Ross Chastain, who spun out of contention late in the going, to claim the victory.

“I was kinda happy with where we put ourselves.” Allmendinger said after the win. “It was hard to drive, I had to drive it a certain way…” he added in describing the car. But for all the dominance and visiting victory lane, Allmendinger was a bit tempered on the weekend.

“Don’t get me wrong, I love showing up to road courses, but it is not a fun weekend for me,” said the veteran. “I put a lot on me anyway but at these tracks. I know the expectations that I put on myself and the outside world put expectations on me.”