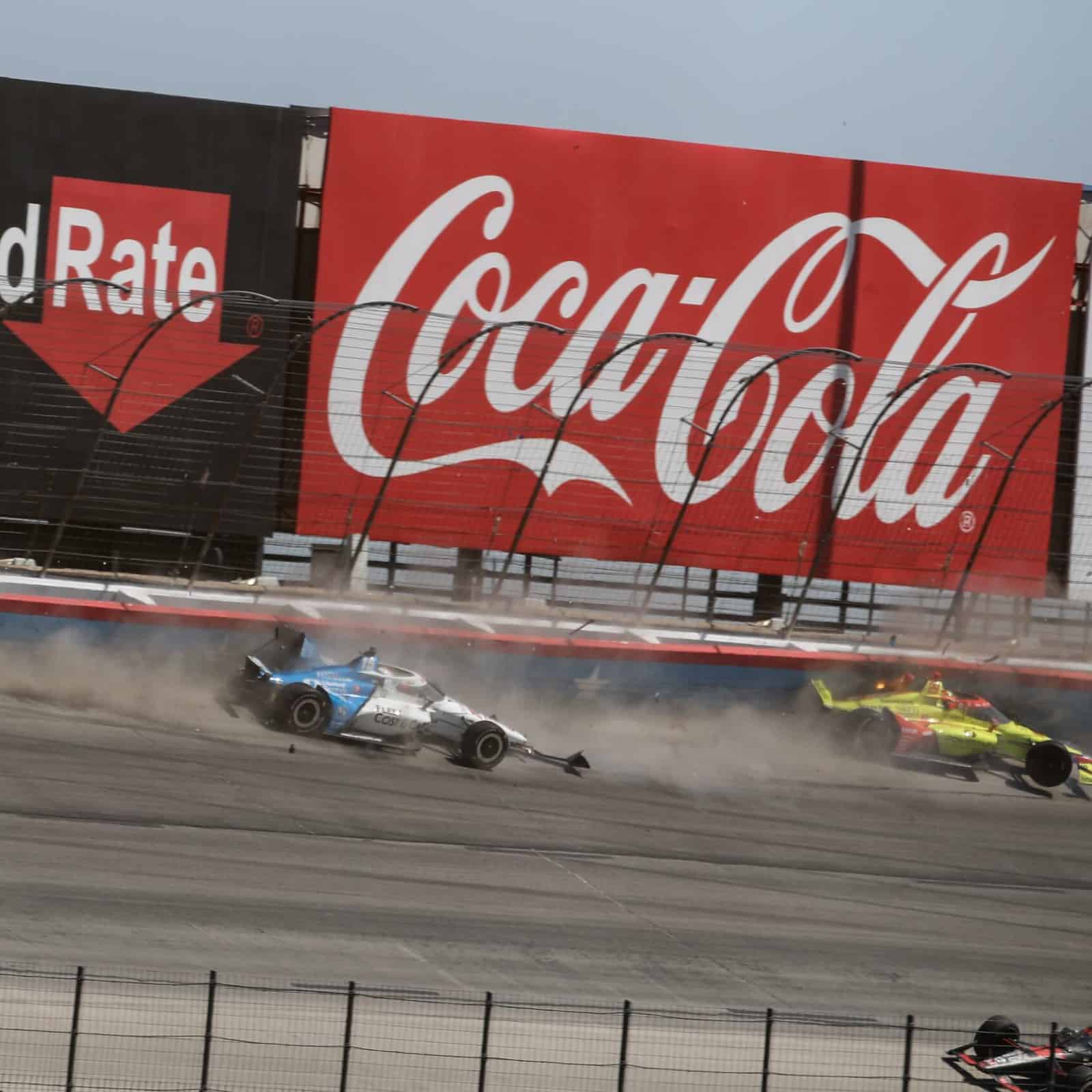 After the field got the green flag on lap 128 following Kyle Kirkwood’s accident, Andretti Autosport’s Devlin DeFrancesco went underneath Graham Rahal on the backstretch. Rahal was already underneath Helio Castroneves in the No. 06 Meyer Shank Racing Honda.

DeFrancesco’s No. 29 Honda got onto the apron with the left side of the left rear tire, causing the car to slide up into Rahal’s No. 15 car. The pair took Castroneves to the wall with them. The trio finished 22nd (Rahal), 23rd (Castroneves) and 24th (DeFrancesco).

Three cars were involved in this incident on the lap 129 restart.@DevlinDeFran, @h3lio and @GrahamRahal have all gotten out of their cars.

Castroneves’s frustrations were evident in the post-accident interview after seeing the replay of the accident for the first time.

“What happened is unnecessary, it’s still half of the race, a hundred laps to go,” Castroneves said. “I know everybody’s trying to make space as you can see, little late on that call. I mean, come on, you know, that’s gonna happen.”

Rahal was in the middle of both drivers and was frustrated at how the incident started, too.

“I was certainly trying to give Helio as much room as I can,” Rahal said. “But yeah, I mean, if you’re not there,  it’s very hard. Third man in needs to be the last man out. I knew he was there, but I’m trying to give Helio space because I knew [DeFrancesco] wouldn’t make it otherwise.

“I said to Devlin, I think he’s got a bright, bright future, but obviously he punted Takuma [Sato] earlier in the race. And you’ve got to learn from these mistakes.”

Rahal’s reference of Takuma Sato goes back to an incident on lap 99 when DeFrancesco had a small bit of oversteer while underneath Sato, sliding up into Sato and causing the No. 51 Dale Coyne Racing Honda to have a glancing blow off of the turn 2 wall. Sato completed 140 laps and finished 20th as the crew affected repairs to the suspension on the right side of the car. Sato parked his car as he more than likely might not have made minimum speed following the repairs.

On the next restart on lap 113, DeFrancesco got a bit more understeer again under another car, this time sliding up half a lane near Kirkwood. Kirkwood had to move up another half-lane into the portion of the track that was stained by the most recent application of a traction compound that is laid down for the NASCAR races. Kirkwood finished 25th after leading five laps in the No. 14 Chevrolet.

DeFrancesco didn’t speak on camera after his final incident but is quoted in in Andretti Autosport’s post-race press release.

“It was a rough way to end the day,” DeFrancesco said. “Again, I just want to apologize to Helio and Graham. It was a mistake, but I’ll learn from it and move forward. I want to thank the crew because they put together an awesome car. On to Long Beach.”

DeFrancesco’s incident was only part of a long, bad day for Andretti Autosport. Alexander Rossi‘s No. 27 Honda was the first car out of the race with a dead battery on lap 11 while Romain Grosjean had other mechanical trouble that led to his No. 28 Honda going no further than 103 laps. Grosjean would finish 26th, just ahead of Rossi. Colton Herta had a left front wheel gun jam on his final pit stop, dropping him off the lead lap. Herta finished 12th in the No. 26 Honda.

The Acura Grand Prix of Long Beach will be on April 10th.