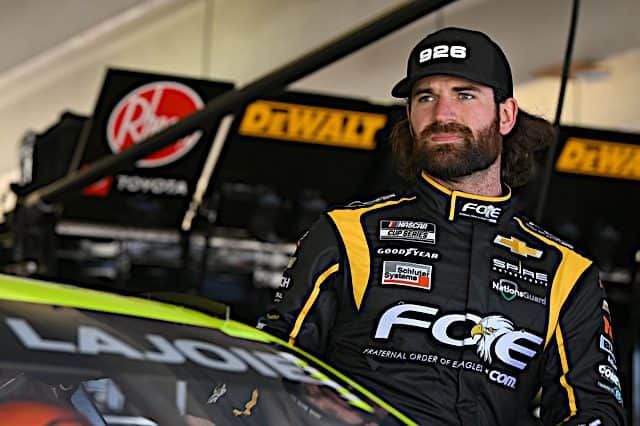 HAMPTON, Ga. – For the Spire Motorsports team, going into this Sunday’s (March 20) race at Atlanta Motor Speedway was a giant unknown — just like it was for everybody else.

Despite that, the small team was able to come out with only their second-ever top-five result.

Corey LaJoie, in what is now his fourth full-time NASCAR Cup Series season, finally earned his first career top five in the No. 7 Chevrolet and the first for the underdog team since Justin Haley‘s rain-shortened win at Daytona International Speedway in 2019.

The 1.5-mile oval was repaved and reconfigured late last year, and instead of a typical mile-and-a-half circuit that we have seen time and time again in NASCAR, Sunday’s race proved the new surface to act more like a superspeedway like Daytona International Speedway.

So, like many race teams, Spire Motorsports came up with a plan.

Unlike many race teams, their plan actually worked.

“We had a plan; we didn’t always execute it today,” Jeff Dickerson, owner of Spire Motorsports, told Frontstretch. “You always talk about like you do at Daytona and Talladega and try to get a plan, and it actually unfolded exactly how we wanted it to.”

The plan was simple, even if it almost got cut short near the halfway mark.

Both LaJoie and teammate Josh Bilicki were meant to validate their speed early on in the long 500-mile event. Once they realized they had the speed to race with the top teams, they hung back to avoid the wrecking cars up front.

“We were just trying to keep everybody calm. We already knew we had a fast race car,” said Dickerson. “You get the feeling of, ‘Ok, now! Let’s go! Let’s pounce!’ And that’s not where we were at. We knew they weren’t going to be done wrecking.”

Before the final lap, there were already 27 different cars involved in crashes throughout the day. That’s nearly two-thirds of the field, and well over the track’s record amount.

LaJoie was one of them. On lap 146, he was collected in the biggest crash of the day. A pileup that involved 13 different cars after leader Tyler Reddick cut a tire in front of the field.

BIG problems as @TylerReddick goes around at the front of the field! pic.twitter.com/XEg6USKoxV

Despite the issues, LaJoie’s damage was mostly cosmetic, and was able to return with the same speed he had before.

“Obviously, (the plan) goes out the window when you’re going backwards through the grass through the quarter-mile,” Dickerson said. “When the thing came down on all four (tires) and it drove away. We were like, ‘Oh, no! I think we’re going to be okay.'”

If you ask LaJoie, the spin actually helped.

“I think it handled better,” said LaJoie when asked about his car after the spin. “Rarely do you adjust it yourself and it goes any better. It didn’t go any worse.”

Near the end, the No. 7 was running in the top 10 as the laps were winding down. Race leader and eventual winner William Byron was the lead engine of the long train. Everyone knew it was only a matter of time until somebody made a move.

When they did, suddenly the field broke apart into the two lanes all desperately looking for an edge over the car next to them. Desperation led into chaos, and in typical superspeedway fashion, one last big one occurred right before the finish line — and right in front of LaJoie.

A replay of Sunday's crash coming to the checkered flag: pic.twitter.com/WlEP5hZ9h7

For LaJoie, somehow, someway, the seas parted, and he only barely snuck by to finish sixth on track.

However, a line penalty for Christopher Bell meant he would be relegated back to 23rd, and Lajoie was bumped into his first career top five.

“I think if you had told me we were going to have three top-15s at the beginning of the season, I would have probably laughed at you,” LaJoie said.

“We’ve still got a lot of work to do, but today was a good day.”