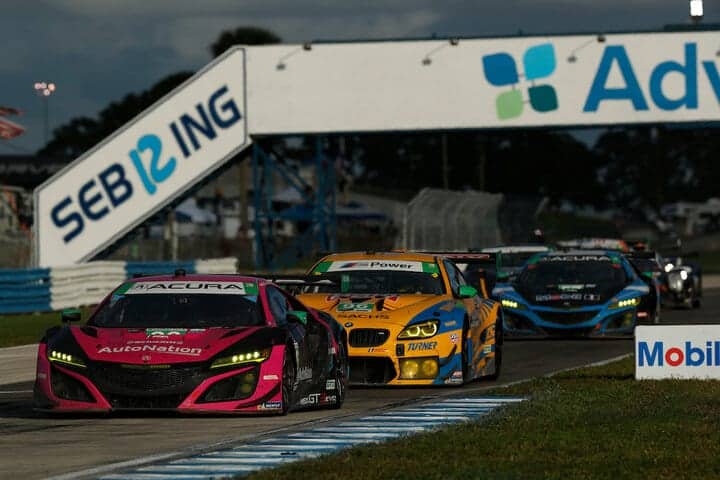 For this Saturday’s Mobil 1 12 Hours of Sebring at Sebring International Raceway, there are 53 cars entered in the five classes.  The 53 entrants is a 16-car increase over last year’s race and, much like at Daytona, the most teams to enter the endurance classic since 2014.

The DPi class has the same seven teams entered that competed at Daytona back in January.  The biggest change here is that Neel Jani will be in the No. 02 Cadillac in place of Kevin Magnussen.  Magnussen will be in Bahrain to make his racing return to Haas F1 Team, whom he drove for as recently as 2020.

INDYCAR regulars Jimmie Johnson, Scott Dixon and Helio Castronves were originally going to be in the race, but the tight 14-hour period between the end of Sebring and the start of the Xpel 375 ruled them out.  Jose Maria Lopez, Ryan Hunter-Reay and Stoffel Vandoorne will drive in their places.

The LMP2 class has eight teams entered, down from 10 at Daytona.  G-Drive Racing’s two ORECA 07-Gibsons are not entered, as originally planned.

DragonSpeed has a completely different driver lineup that more aptly who the team will field for the remainder of the year.  Juan Pablo Montoya, who raced for the team last year in the WEC, will be in the seat along with Henrik Hedman.  Juan Pablo’s son, Sebastian, who will be racing in the Formula Regional European Championship this year, will make his IMSA debut.  We’ll have a little more on the Montoyas later this week here at Frontstretch.

FASTMD Racing, which debuted their Duqueine M30-D08-Nissan at Michelin Raceway Road Atlanta back in November, returns to the grid.  The team returns with the same driving trio of Todd Archer, Max Hanratty and James Vance from last fall.  The other squad that didn’t race in Daytona is JrIII Racing’s No. 30.  Garett Grist, who drove for Performance Tech Motorsports at Daytona, joins the team with full-season teammate Ari Balogh.  Defending Prototype Challenge championship Dakota Dickerson will join them.

At Performance Tech Motorsports, they have a mostly new lineup.  Only Dan Goldburg is back in the car from Daytona.  He’s joined by the returning Rasmus Lindh, who drove for Andretti Autosport at Daytona.  Cameron Shields completes the lineup.

The GTD Pro class has 11 entries, down from 13 in Daytona.  Corvette Racing’s No. 4 entry, along with KCMG’s No. 2 Porsche and WeatherTech Racing’s third Mercedes are not entered.

The biggest addition is the new joint venture effort between Wayne Taylor Racing and Racers Edge Motorsports.  This team will field the No. 93 Acura for Ashton Harrison, Kyle Marcelli and Tom Long.

For Harrison, Sebring will mark her IMSA debut.  She made her endurance debut in last October’s Indianapolis 8 Hours, where she earned the overall victory in the corresponding Fanatec GT World Challenge America Powered by AWS round and finished sixth overall.  Her previous experience has primarily been in Lamborghini Super Trofeo North America.  Marcelli will be making his first WeatherTech start since 2018, when he won two races in a Lexus for 3GT Racing.  For Long, it will be his first WeatherTech start since 2017.  Back then, Long drove the SpeedSource-run Mazda RT24-P in the Prototype class.

Risi Competitzione has a new driver in their fold for this weekend.  Joining Davide Rigon and Daniel Serra is Eddie Cheever III, son of former Formula 1 racer and 1998 Indianapolis 500 winner Eddie Cheever.  Cheever III comes to the team after spending the last couple of years racing Ferraris in both the FIA World Endurance Championship and Fanatec GT World Challenge Europe Powered by AWS (both Sprint and Endurance).  Sebring will mark Cheever’s IMSA debut.

Finally, the GTD class has 17 entries, down from 22 at Daytona.  The teams that are not entered are the Porsches of GMG Racing and TeamTGM, Lamborghinis from TR3 Racing and T3 Motorsport North America, Northwest AMR’s Aston Martin and the SunEnergy1 Racing Mercedes.

Paul Miller Racing is back on the grid for the remainder of the season.  The team will be debuting their new BMW M4 GT4, but couldn’t get their car until after Daytona.  Regular drivers Bryan Sellers and Madison Snow are back for the remaining races.  They will be joined for the endurance events by Erik Johansson.  Johansson comes to the team after racing part-time schedules for the past two years in Germany’s ADAC GT Masters.  Sebring will be his IMSA debut.

HTP Winward Motorsport has signed Marvin Dienst to drive the No. 57 Mercedes, replacing Mikael Grenier.  Dienst has previously raced one full season in the WEC in a Porsche 911 GT3 R and has spent the past six years racing in GT3 equipment in Europe.  The move was made due to Grenier’s driver ranking being upgraded from Silver to Bronze since Daytona.