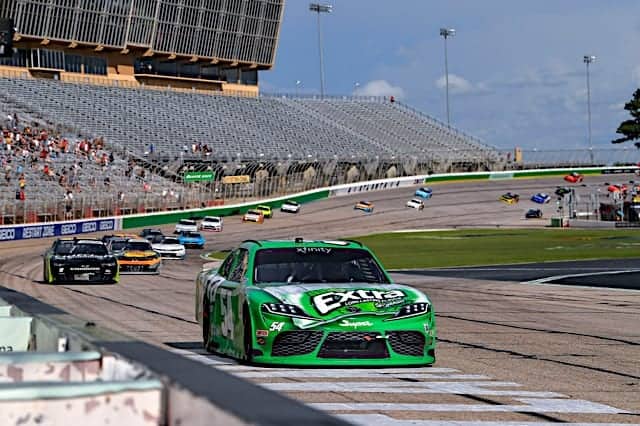 The NASCAR Xfinity Series takes on the high-speed Atlanta Motor Speedway in the fifth race of the season.

There are 43 cars vying for 38 spots, meaning five cars will pack up and go home following qualifying, barring any entry list changes.

Though the car is currently listed as TBA, Chad Finchum is expected in MBM Motorsports’ No. 13.

After originally being scheduled for seven races in Joe Gibbs Racing’s No. 18 Toyota, Trevor Bayne adds another start in his second consecutive race.

Jeffrey Earnhardt returns to the No. 26 ForeverLawn Toyota for Sam Hunt Racing. John Hunter Nemechek appeared with the team the last two races.

Jesse Iwuji returns to his own No. 34 after Jesse Little filled in at Phoenix.

With Earnhardt driving for SHR, Shane Lee will pilot the No. 35 Kitty Kat Coin Toyota for Emerling Gase Motorsports. Lee made his first Xfinity start since 2019 at Daytona International Speedway with EGR.

Loris Hezemans will attempt to make his season debut with RSS Racing in the No. 38 Ford. Hezemans attempted to make the Phoenix race last week with Reaume Brothers Racing but failed to qualify.

The No. 44 for Alpha Prime Racing will be driven by Sage Karam in his season debut, while Tommy Joe Martins returns in the No. 45.

Harrsion Rhodes will look to make his first race since 2017 with Means Motorsports’s No. 52 Chevrolet. Rhodes failed to qualify at Daytona with the team.

Dillon Bassett will attempt to make his season debut. Bassett will pilot the No. 77 Jerry Hunt Supercenter Chevrolet for Bassett Racing.