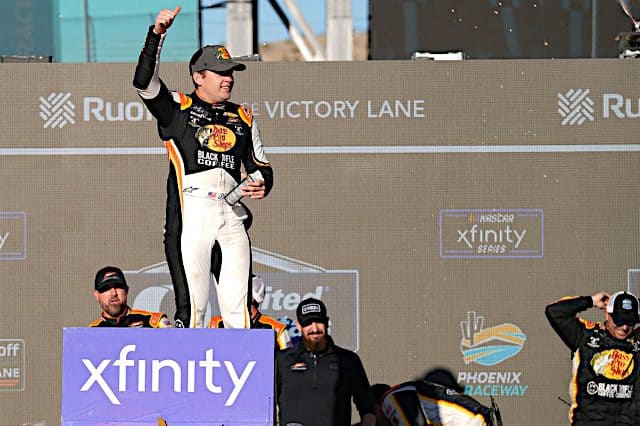 Noah Gragson dominated the United Rentals 200 Saturday (March 12), leading 116 of 200 laps. After a slow green-flag pit stop, Gragson ran down Brandon Jones and took the lead for the final time with 14 laps to go to take the win at Phoenix Raceway.

“Feels great to get the 50th anniversary Bass Pro Shops Camaro in victory lane,” Gragson told FOX Sports 1’s Regan Smith at the start-finish line. “Pit crew executed great. This team has been on a roll so far this year with top three finishes in the first four races.”,

Gragson started on the second row and nearly won the first stage from Trevor Bayne, who hit the kill switch on his steering wheel and nearly missed the green flag. The second stage saw Gragson battle early on for the lead with Jones, then dispatch of him on lap 70 and pull away to win the stage handily.

The final stage ran caution-free, allowing Gragson and the rest of the leaders to run away from the rest of the pack.  After a so-so final stop under green dropped him to second, Gragson gradually ran Jones down with the help of lapped traffic.

Late into the final stanza, Gragson made a daring move on the dogleg apron, using lapped traffic as a pick to get around Jones on lap 186. This turned out to be the decisive maneuver as Gragson was able to pull away to take his first win of the year.

Gragson’s margin of victory was 2.555 seconds over Jones. Josh Berry was third after starting at the rear, while Bayne recovered from a speeding penalty under the final yellow to finish fourth. John Hunter Nemechek rounded out the top five. Ty Gibbs recovered from a spin to finish sixth, then Justin Allgaier and Kaulig Racing teammates AJ Allmendinger, Daniel Hemric and Landon Cassill.  These 10 drivers were the only ones on the lead lap at the finish.

Allgaier was better Saturday than his seventh-place finish shows. He recovered from starting in the rear and a late speeding penalty to finish top 10.  Kaulig Racing on the other hand, had all their cars finish top 10 for the 2nd week in a row.

The Xfinity Series will be back in action Saturday, March 19 at Atlanta Motor Speedway for the Nalley Cars 250. FOX Sports 1 will have TV coverage starting at 5 p.m. ET.