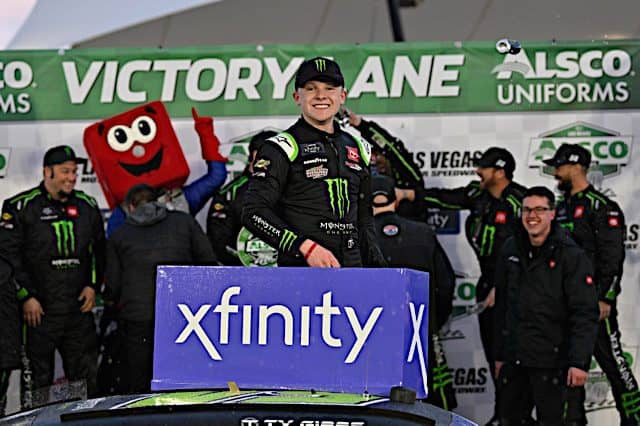 Heading into the final restart with six laps to go, Ty Gibbs hadn’t led a single lap of the NASCAR Xfinity Series race at Las Vegas Motor Speedway. But with help from Justin Allgaier, he got clear of a dominant Noah Gragson on the final restart and led the last six laps to score his fifth career Xfinity win and his first of the 2022 season as the caution flag flew on the final lap to end the race under yellow.

“First of all, I want to say all glory to my Lord and savior, Jesus Christ,” Gibbs said. “It [the race] was awesome, I want to say thank you to Justin Allgaier for my push too, that helped me out a lot. I had a fun time racing with the Junior [JRM] cars and hopefully we can keep it going and win some more races.”

Gragson, who led 52 laps and won both stages, had to settle for second place at his home track. Although a disappointing defeat for him, he has now recorded top-three finishes in the first three races of the season and will now enter next weekend’s race at Phoenix Raceway as the Xfinity Series points leader.

“Just kinda got beat at our home game there,” Gragson said dejectedly. “Restarts just came up short. It felt like it was rolling [on the final restart], but I guess that’s the box that we’re in.”

Defending series champion Daniel Hemric finished third, while Josh Berry rebounded to finish fourth after missing pit road during a round of green flag pit stops in the final stage. Allgaier, who led a race-high 62 laps and was in command of the race during the long green-flag run in the final stage, could only a muster a fifth-place finish after being shuffled out of the lead on a late restart.

In a race that saw the checkered flag wave nearly four hours after the initial green flag, things started off slowly. The first caution was for Brennan Poole blowing an engine on the fourth lap, but that wasn’t the first major event of the race. On lap 3, Gibbs bumped Ryan Sieg after Sieg got loose out of turn 4. This caused significant damage to the rear end of Sieg’s car, and he would fall several laps down while making repairs.

The race then resumed on lap 13, but debris on the track quickly brought out the caution for a second time. During this caution, the race was halted on lap 19 as a wintery mix of rain and snow began to fall in the Nevada desert on a Saturday afternoon in March where the high temperature was in the mid-50’s. After a red flag that lasted more than 40 minutes, the race resumed for the third time on lap 23.

The third green-flag run of the race lasted just as long as the first two. After being black-flagged by NASCAR for being too slow, Sieg tried to retaliate against Gibbs but instead damaged his own car while collecting Creed and Moffitt in the process. After that altercation, Sieg was done for the day and was ordered to go to the NASCAR hauler. During his race-winning interview, Gibbs apologized for his part in the controversy.

“I want to apologize to 39 [Sieg] for the contact I made. It wasn’t my best decision, and I’m sorry to that whole group, Ryan’s family, they work so hard,” Gibbs said.

Throughout all of the early chaos, Allmendinger calmly stayed out front. He had led the first 32 laps of the race, but after another restart on lap 33, he relinquished the lead to Sam Mayer. Allmendinger quickly faded outside of the top-five, while a two-horse race emerged at the front as JR Motorsports teammates Gragson and Mayer battled back and forth for the lead. Gragson took the lead for good on lap 39, and he cruised to the stage one victory.

During the stage one caution, Creed did not pit, but he was quickly passed for the lead by Mayer and was then swallowed up by the rest of the field. Mayer then stretched his way out to a comfortable lead, but a lap 66 spin by Jesse Iwuji bunched the field up once again. On the ensuing restart, Mayer was again passed for the lead by Gragson, and Gragson remained in control of the race until Matt Mills‘ hard crash into the backstretch brought stage two to an end under caution.

By this point, the race had been stop-and-go. Including the two stage-ending cautions, there were seven cautions in the first 90 laps and no one was able to get into a rhythm. That all changed at the beginning of the final stage, however, as there was a long green-flag run that lasted 78 laps. New contenders began to show up at the front, as Allgaier passed Mayer for the lead on lap 110 and remained in control with a fast long-run car. Just 10 laps after the taking the lead, Allgaier had managed to stretch his lead to more than three seconds, while Gragson and Gibbs emerged as his biggest challengers.

After a tumultuous first half, the drivers now had some breathing room. Allgaier remained in command when green-flag pit stops began on lap 142, and Allgaier cycled back into the lead on lap 153. Now with a five-second lead and under 30 laps to go, Allgaier’s one hope was that the race would finish under green. Unfortunately for him, a multi-car crash between Iwuji, Ryan Vargas, and Stefan Parsons brought the caution back out on lap 172.

The end of the 78-lap green-flag run also brought about a stop-and-go finish, as there were three more cautions in the final 20 laps. After the restart on lap 181, Allgaier lost the lead to Gragson, who put him in a three-wide sandwich after receiving a powerful push from Hemric. But Gragson was unable to build up a lead as the caution came out two laps later for Mayer’s crash into the turn 2 wall.

The race restarted on lap 189, and Gragson retained control of the lead after the restart. But once again, the caution came out before the field could complete the lap as Ryan Truex triggered a multi-car crash in turn 4 that collected Austin Hill, Riley Herbst, John Hunter Nemechek, and himself.

Finally, the leaders headed to the final restart of the race at the conclusion of lap 195. With Gragson on the outside and Gibbs on the inside, Gibbs got the push from Allgaier to clear Gragson into turn 1 and be out front when the final-lap crash between Bayley Currey and CJ McLaughlin ended the race and clinched the victory for Gibbs.

Xfinity travels to Phoenix Raceway on March 12 at 4:30 p.m. ET. Television coverage will be provided by FOX Sports 1.