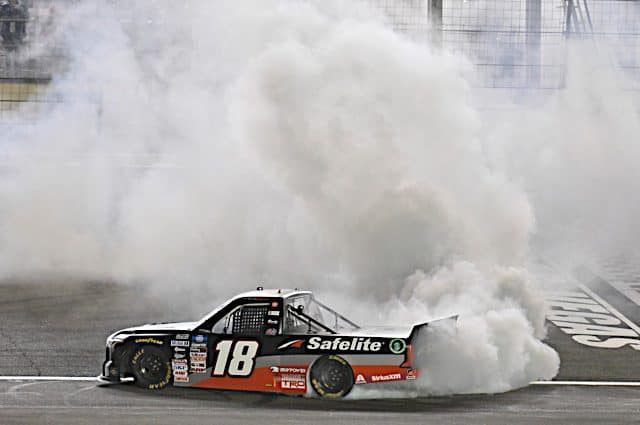 In a NASCAR Camping World Truck Series race that was decided by late-race restarts, Chandler Smith made a daring three-wide move against Zane Smith and Kyle Busch on the final restart with two laps to go. Chandler Smith led at the white flag lap; Zane Smith led out of turn 2, and Chandler Smith performed a crossover move on the backstretch to take the lead into turn 3 and cruise to his third career win and his first at Las Vegas Motor Speedway. Smith led a race-high 32 laps on his way to victory.

“All up there [God],” Smith said. “It’s the good lord man, he performs miracles all day, he’s given me this talent and this opportunity to drive this truck for Kyle Busch Motorsports, for Safelite, and Charge Me, and I’m just beyond thankful for this whole opportunity. All the glory goes to him [God], all my guys, my wife, everybody that’s a part of this deal and deals with me every single day. I’m just super thankful right now.”

Zane Smith’s bid to win the first two races of the season came up short, as he had to settle for second behind the other Smith. But despite the close defeat, he overcame damage from a multi-truck crash in stage one and a speeding penalty in the final stage to end with a solid finish.

“I don’t know [if the damage had an impact]. Regardless, I had a lot of fun right there,” Smith said. “That was some hard, good racing. I can’t believe I’m up here with all that damage, so just wait until this thing’s clean. But man, it was such a fast truck, thank you to Front Row Motorsports, MRC Construction, so many people that are putting a hand on this truck, and it’s so cool to see it pay off.”

After the race, Zane Smith was disqualified due to a lug nut issue, so he’ll drop to 36th place.

UPDATE: The No. 38 has been disqualified for a lugnut infraction.

Busch, who was the leader heading into the final restart, had to settle for third after teammate Chandler Smith went by him on the outside. With Zane Smith’s disqualification, Busch moves up to second.

“The 18 was definitely the best truck tonight, so they did a great job being able to execute there,” Busch, owner of Smith’s No. 18 truck, said. “We split him on that second-to-last restart and there on that last restart, he split us, kind of a little payback, I guess. I was worried that the 38 [Zane Smith] was going to win, but overall, he [Chandler Smith] was able to get a good run and get clear down the backstretch.”

John Hunter Nemechek, Grant Enfinger, and Derek Kraus were running fourth, fifth, and sixth behind the top three, but contact between the three of them caused Kraus to swerve out of control down the backstretch with two laps to go. He saved the car, but Enfinger and Nemechek suffered flat tires and hard crashes on the final lap as a result of the contact. Jordan Anderson and Spencer Boyd were also collected in Nemechek’s crash and were unable to finish the race.

All five of them finished 23rd through 27th. Boyd was later treated in the infield care center for a potential dislocated shoulder. Boyd was then sent to a medical facility for further evaluation.

Spencer Boyd says he dislocated his shoulder and will go get x-rays following his last-lap wreck at Las Vegas. Says he should be good for Atlanta. pic.twitter.com/6yxTHM0RSC

Stewart Friesen emerged from the calamity to finish third, while Ryan Preece — who was leading under the final caution until his engine shut off — held on to take fourth. Tanner Gray followed up his fourth-place finish at Daytona with a fifth place at Las Vegas.

The first caution was for Blaine Perkins‘ crash in turn 2 after blowing a tire due to earlier contact. Chandler Smith and Ben Rhodes elected to stay out while Zane Smith, Busch, and other leaders decided to pit, which set the field up for a three-lap shootout to end stage one. The shootout didn’t even last one turn, however, as Zane Smith got into Colby Howard — who had stayed out under caution — heading into turn 1, and it triggered a multi-truck crash that also collected Crafton, Chase Purdy, and Hailie Deegan. Rhodes had gotten the jump on Chandler Smith to be out in front when the crash happened; he went on to win stage one.

Stage two was relatively clean, as the only caution was for a Todd Bodine spin on lap 54. Bodine, the 2006 and 2010 series champion, made his first start in the series since 2013 in an effort to end his NASCAR career with 800 starts across the top three series. Before his spin, Carson Hocevar took the early lead in the stage, and he held off charges from Busch for several laps until Busch ultimately got by him on lap 46.

Bodine’s spin came with just a couple of laps before the conclusion of stage two, and that allowed split strategies on pit road. Busch pitted, while Gray and Rhodes stayed on the track. In a repeat of the first stage, Rhodes got the early jump on the restart and then held off a charge from Busch to sweep the first two stages.

Heading into the final stage, Busch inherited the lead after Rhodes pitted during the stage break. However, Busch’s time in the lead didn’t last long, as Nemechek took back the lead on lap 72. From there, Nemechek had checked out until a second Bodine spin bunched the field up once again.

After the restart, Chandler Smith took the lead from Nemechek on lap 95, and Smith retained the lead despite additional cautions for Hocevar’s spin on lap 97 and Rhodes’ hard crash in the tri-oval on lap 103.

Kris Wright‘s spin on lap 118 was the penultimate caution, and Smith was unable to keep the lead on the ensuing restart. Busch had the momentum on the restart, and he went to the outside and put Smith in a sandwich between himself and Christian Eckes. When the dust had settled, Smith had fallen back to fifth. With 10 laps to go, it was now a battle between Busch and Eckes — last year’s winner at Las Vegas in the fall — for the win. However, Eckes’ chances at the win were dashed with nine laps to go when he moved to block Busch on the backstretch and wasn’t clear. He then went on a long backstretch slide that saw him pound the inside wall.

Because Busch had slowed up during the contact with Eckes, Preece managed to get by Busch to take the race lead. But under caution, Preece’s engine lost power and he was forced to drop down to fifth place for the restart. And on the final restart, Chandler Smith repaid the favor to his boss and put Busch three-wide in the middle on the final restart, and then outdueled Zane Smith to emerge victorious in Sin City.

The Trucks take on Atlanta Motor Speedway on Saturday, March 19 at 2:30 p.m. ET. FOX Sports 1 will provide the television coverage.