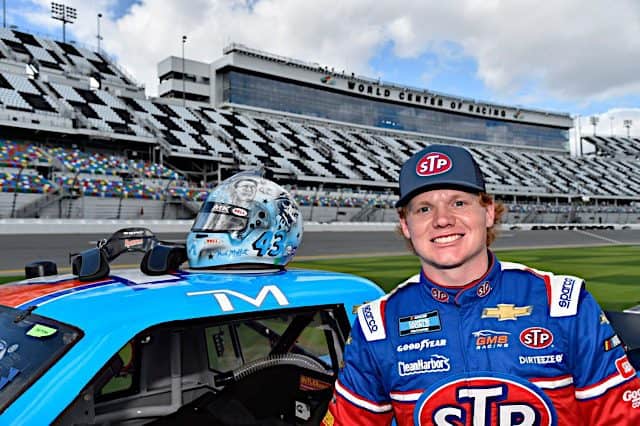 Thad Moffitt is the grandson of Richard Petty, the NASCAR Cup Series’ all-time wins leader and one of three drivers with a record seven series championships, and great-grandson of Lee Petty, the winner of the first Daytona 500.

This new deal comes after Moffitt raced in the ARCA Menards Series for five part-time years with 44 starts. That stint ended with 16 starts in the No. 46 Ford Fusion for David Gilliland Racing in 2021. He also plans to race a limited number of races in ARCA and in Trans-Am in 2022.

Moffitt only gathered eight top fives and 25 top 10s in his 44 starts in the stepping-stone series. Leading only 13 laps in total, the 21-year-old has been unable to score a win in ARCA as of yet.

At Daytona International Speedway, the next generation of the racing pedigree made his first career start in the Truck Series while driving a No. 43 STP Chevrolet reminiscent of his grandfather’s famous No. 43 when he retired in 1992. It was only the fourth time a fourth-generation driver competed in one of NASCAR’s national series.

In that scheme honoring the 30th anniversary of Richard Petty’s retirement year, Moffitt earned an 18th-place finish in the series’ first race of the season. The No. 43 Silverado returns to the track on Friday, March 4, at Las Vegas Motor Speedway, but with a familiar sponsor from Moffitt’s ARCA starts, Clean Harbours.

Frontstretch caught up with the newest driver of the iconic No. 43 before his first Truck start at Daytona.

Dalton Hopkins, Frontstretch: How did this deal to run in the Truck Series come together?

Thad Moffitt: Yeah, so grandpa [Richard Petty] never really wanted me to run Trucks. He was not big on it. He said, ‘I don’t understand driving from a car to a truck back to a car,’ so that’s why he kept me in ARCA for a long time.

Then once we got with the GMS guys, it just made sense for me to come run the Truck Series. It made more sense for me to do that than try and find an Xfinity [Series] ride, so we just stuck with the Truck deal. Then it was tough to get GMS a third team together, so that’s where Josh [Reaume] came into play in the Reaume Brothers. So hopefully, we can build on all of our equipment, build on all of our stuff this year and have a good solid year.

Hopkins: How do you feel coming into Trucks? What made you feel like you’re prepared to make the jump from ARCA?

Moffitt: I feel like the Truck Series is really competitive right now. We have a lot of former Cup drivers. You have a lot of guys who’ve been doing this for their whole life. You got [Matt DiBenedetto]. You got John Hunter [Nemechek]. You got Grant Enfinger, so some really good guys in the Truck Series. I think the biggest thing for me right now to progress is — I learned how to drive in the lower series, learned how to race a little bit — but now I need to learn how to race the guys that have been doing it for a long time. So I think that’s what put us in the position to move up and, hopefully, get in some positions where we can race really good racecar drivers and I can learn as much as possible this year.

Hopkins: What’s it like to be making your series debut at Daytona?

Moffitt: I’m super excited, man. I’m just here to learn as much as I can about these trucks. I’ve been trying to get here for a while, and it’s really cool for me to be able to do this with STP and the 43 number and everything that they’ve done for our family over the years. Just for me to be able to run that number — it’s so iconic at this speedway and every speedway throughout the United States. For me to be able to do that and hopefully learn as much as I can and finish the race, run as many laps as possible, that’s some of my goals. Hopefully, we have a good, solid start to the year here with the Reaume Brothers and GMS and Petty GMS and everybody who put a lot of effort into getting us here.

Hopkins: Tell me about growing up with the weight of the Petty name on your shoulders.

Moffitt: Yeah, you know, that’s a question I get a lot. Most of the pressure that I have is put on by myself. Grandpa never puts any pressure on me. Kyle [Petty] never puts any pressure on me. They could care less whether I run 30th or whether I come home the winner. They’re going to love me either way. They’re just like that. That’s how they’ve always been, and they understand it. They don’t put any added pressure on me. They do get onto me when I mess up, as they should, right? But I think that most of the pressure is just from myself.

Hopkins: Have they given you any pointers? Any tips?

Hopkins: How did the 30th anniversary of The King’s retirement inspire everything that’s happening?

Moffitt: The big deal was STP and us got together in December, and we started talking about running the Truck race. And our design guy was like, ‘You know, Richard retired 30 years ago this year,’ and we were like, ‘Oh, that’s perfect!’ The firesuit is the exact same firesuit he wore. Everything is the same except for the helmet, the seats and stuff, right? It’s pretty close. It’s as close as we can get, so I’m looking forward to being able to let that scheme run again.

Hopkins: With that throwback scheme, is Darlington Raceway one of the tracks that you’re considering racing?