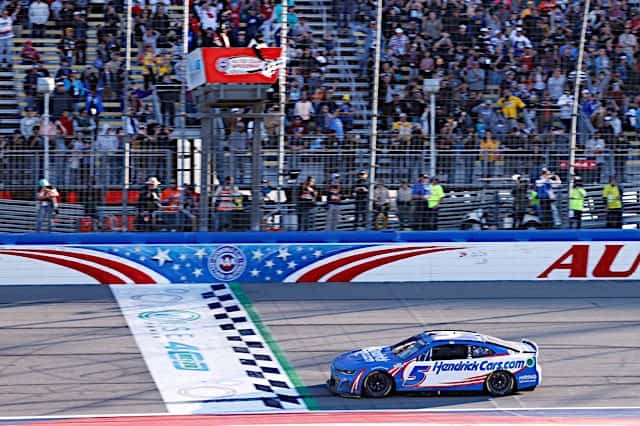 NASCAR’s 2021 champion’s Daytona 500 ended in sparks on the frontstretch and a 32nd-place finish.

On Sunday (Feb. 27) at Auto Club Speedway, Kyle Larson‘s No. 5 came to life late, and the defending champ held off all comers to win his first race of 2022 in the Wise Power 400 and open his title defense.

“Always fun here to win in the home state,” Larson said in his post-race interview. “Hard work all weekend there, didn’t feel great in practice yesterday, [crew chief] Cliff [Daniels] and everybody made some good adjustments overnight and the car handled a lot better.

“There was definitely some guys that were quicker than us, but they had their misfortune. Just kept our heads in it, long day, long race. Restarts were crazy, the whole runs were crazy. Definitely wild, but cool to get a win here in California and hope we get on a little streak.”

After a command from Los Angeles Rams players and Super Bowl LVI champions Matthew Stafford and Andrew Whitworth, as well as a five-wide fan salute and actor Danny Trejo waving the green flag, the field took off just shy of 4 p.m. ET.

A Super Bowl caliber command! 📣🏆📣 ENGINES ARE FIRED IN FONTANA.

Polesitter Austin Cindric was quickly passed by Erik Jones, and the No. 43 was out in front for multiple laps before Tyler Reddick, ripping the top in his No. 8, passed him for the top spot.

The afternoon’s first caution flew for a Kyle Busch spin on the backstretch. The No. 18 had dropped down the running order before he eventually went around, the yellow flag dually serving as the competition caution.

Reddick was then challenged by Chase Elliott, who took the lead but then made contact with the wall, dropping out of the top spot before spinning on the backstretch. Josh Bilicki spun as well, but nothing got in the way of eventual stage one winner Reddick … outside of his left leg, which was apparently falling asleep.

As stage two began, Larson and Chase Briscoe traded the lead before Reddick snatched it back. Though the second segment of the race featured several spins, Reddick swept the stages.

Those spins came from Christopher Bell, who ended up in the garage for repairs, as well as Chris Buescher and Brad Keselowski. Buescher’s No. 17 ended up broadsiding the outside wall, ending his race, while Keselowski went around in front of half the field on the frontstretch but hit no one en route to the grass.

Unfortunate end to Chris Buescher. I caught up with him in the infield care center. #NASCAR pic.twitter.com/Ce8GebtTRt

Despite his dominance, Reddick blew a rear tire while leading, allowing second-place Jones to scoot by. Reddick tried to ride it out near the outside wall, but William Byron slammed into the No. 8 to damage both cars. The incident was another case of the tire issue seen at Daytona rearing its head.

Heavy contact for Tyler Reddick and William Byron after a tire issue for the No. 8. https://t.co/4q2YOBTRE9 pic.twitter.com/j9kkAO0yfp

Keselowski was involved in his second incident of the day when contact from Bubba Wallace sent both cars around, also involving Cindric.

Logano inherited the lead via a cycle of pit stops, but Larson dove by for the lead before a Ross Chastain spin brought out another caution.

Larson faced competition from Logano and Hendrick Motorsports teammate Elliott, the latter of whom winged high to try to pass Larson entering the first corner. Larson went up late, unaware that the No. 9 was there, and Elliott ended up in the wall and pitted with damage.

"I'm sorry. I didn't know he was there."- Larson https://t.co/C6xwGVgTK6 pic.twitter.com/jcBjEwzdVS

The No. 5 retained the lead, gapping Logano, while Austin Dillon and Daniel Suarez made appearances in the top five. Suarez dropped back after bouncing off the wall, and Elliott spun around to bring out a caution with nine laps left.

Suarez and his pit crew atoned by making up five spots on pit road, jumping up to second for the restart. He briefly grabbed the lead from Larson thanks to a huge push from Jones, but Larson took it back for good.

Larson had to fend off Dillon as Justin Haley crashed behind the leaders, skidding through the infield before pounding the inside wall. No caution flew and Dillon had one more shot, but Larson kept clear and won his first race of 2022.

The Cup Series next heads a state over to Las Vegas Motor Speedway, where the Pennzoil 400 will get underway on Sunday, March 6 at 3:30 p.m. ET. Larson is the defending winner of the spring race, while Denny Hamlin is the most recent winner at the track.

Good racing. I enjoyed today’s race, and actually surprised at what I was seeing. Sure, there are problems to address, but nothing major. I hope this continues at Vegas.

I think the races are going to be messy for a while. Everyone has to learn where the limits are. Everyone has to learn how to adjust the car. Interesting that both the usual top runners as well as the rest of the field are making mistakes. I wouldn’t exactly call this a true parity but it is creating a kind of parity where the crapshoot factor has been ratcheted up. The top 15 today almost looked like what you would expect at Daytona and Talladega.
It does create an interesting race but I don’t expect it to last more than the first half of the season. After that they should have a better feel for the car and crews should be acclimated as well.

I look for Kurt Busch to do well at Vegas.

Well he has done well there in the past, for sure. I just don’t think that Jordan team is ready to be a front runner at the 1.5 mile tracks (unless they happen to get lucky). If he did win, it would sure make you know who look like the weakest link.

I hear they’ve been putting a stock V6 in Kurt’s car to keep him from getting too far ahead of his team mate. lol