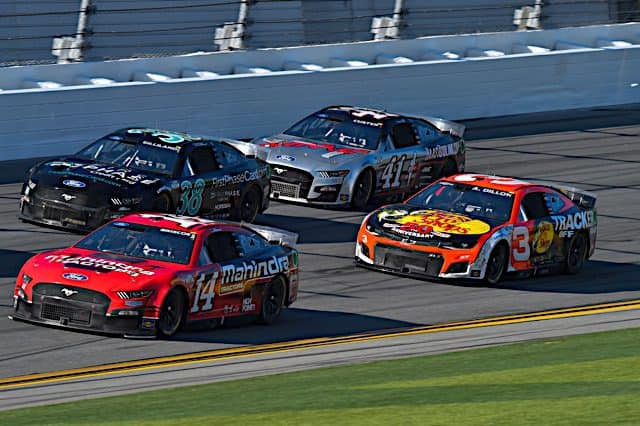 Just like that, another crazy and memorable Daytona 500 weekend is behind us.

Daytona International Speedway is a place that is loaded with 60-plus years of history, more of which forms with each race that’s held there. New storylines have come out of this season-opening weekend, from Austin Cindric’s maiden Cup Series win on Sunday to Myatt Snider’s scary flip on Saturday and everything in-between.

But underneath all of that lies a series of numbers and unique stats that are associated with each number. From the joys of victory to the misery of defeat, there is a stat for just about everything that went down under those sunny Florida skies. Let’s take a look at some.

That is the average age of the three winners this past weekend: Zane Smith (22), Austin Hill (27) and Cindric (23). At age 23, Cindric became the second-youngest winner of the Daytona 500 behind Bayne, who won it as a 20-year-old in 2011. It also marks the second-youngest average age total for opening weekend winners at Daytona, trailing only the 2015 average winner’s age of 21.3 with Tyler Reddick, Ryan Reed and Joey Logano.

Seven brand-new teams began their maiden campaigns in the three respective touring series. In the Daytona 500, Ty Dillon and Erik Jones scored finishes of 11th and 29th in their first race under the Petty-GMS Racing namesake. Jacques Villeneuve finished 22nd with Team Hezeberg for his first Cup start since 2013, while Kaz Grala finished 26th for The Money Team Racing after losing a right-rear wheel and falling several laps down early on in the event.

Harrison Burton had different aspirations for his second Cup start other than going upside down on the backstretch. But by doing so on lap 63, he became the 52nd Cup Series driver to endure a flip at Daytona, and the 19th driver to flip in the Daytona 500 itself. He also gets to share company with Phil Parsons as drivers who have flipped in their second career starts. Thankfully, he was OK.

Snider was the other driver to endure a flip from last weekend, getting spun on the final lap and flying into the backstretch fence before landing on his wheels. With that crash, he became just the 12th different driver to flip an Xfinity Series car at Daytona in its 40-year history. He too was OK.

As mentioned by FOX analyst Clint Bowyer during Sunday’s race, Kyle Busch has surpassed Tony Stewart for being the all-time lap leader in the Daytona 500 without winning it. Busch led 28 laps in the event, bringing his grand total up to 324 laps led in the Daytona 500, but with no Harley J. Earl trophy to back it up. He led a career-high 88 laps in the 2009 Daytona 500 before getting caught up in a crash. His best finish in the race is a runner-up to Denny Hamlin in 2019.