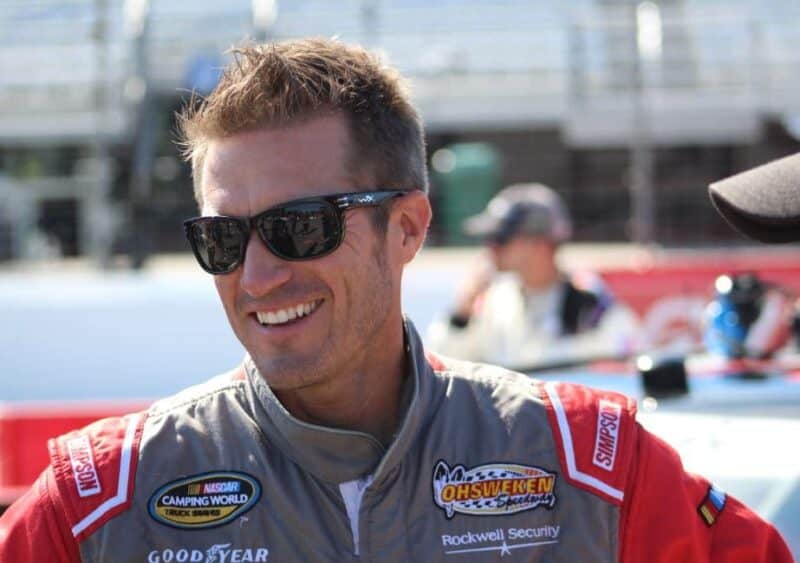 I will openly admit that I was one of the chorus of voices that were critical of MAVTV’s lackluster coverage of the Chili Bowl Nationals finals last month, lamenting questionable camera filters, an overwhelmed website that saw the network for the second year running offer free access to all viewers despite many of us paying subscription fees for MAVTV Plus, and commentators that were cold off the bench after five days of Flo Racing coverage.

After watching the Truck Series race and Daytona 500 this weekend, the first NASCAR races I’ve watched live in more than a year, all I can say is give MAVTV a freaking Emmy.

“NASCAR on FOX” is an insult to live TV, race fans and basic competence in anything. The commentators made more mistakes than ARCA drivers in the draft. A last-lap pass in Thursday’s Duel races that cost JJ Yeley (more on him later) a spot in the Daytona 500 went unnoticed by the FOX booth until after it happened. Clint Bowyer seems to be trying to out-clown Darrell Waltrip and Terry Bradshaw at once and saying nothing relevant to racing doing it. And God knows how much money FOX spent on asinine content such as Michael Waltrip going hat shopping with the competitors he’s paid to cover.

I'm getting the sense from the broadcast booth that they're less interested in this race because it isn't a crashfest. It's forcing them to actually follow storylines of different drivers in the field, which they're not used to doing.

The proliferation of streaming services covering dirt racing has not come without issues. MAVTV Plus has proven to be a lacking technical platform with little customer service. The Cushion remains stuck in the 1980s from a technical perspective. In cases such as IMCA TV’s offerings or 411 Motor Speedway’s new live service, a pay-per-view ticket costs more than an actual ticket to the race (yes, that’s probably by design, but still absurd).

And the reality is that hardcore dirt fans at a minimum are carrying subscriptions with MAVTV, Flo Racing and DirtVision to get through the average race weekend.

But in most all of those cases, those challenges pale to what NASCAR fans continue to consume on FOX. The commentators on Flo, DirtVision, MAVTV, etc. know the sport they cover and stick to covering it while on the mic. All of these streamers prove less is more when it comes to cameras, covering the race without marketing gimmicks. And while yes, streaming dirt races carry subscription costs that network TV doesn’t, they also don’t have ad breaks every other lap.

My first venture back into big-league asphalt racing was well worth the trip, not because Daytona put on a show worth watching, but because it provided a lot of perspective as to just how good dirt racing fans have it in 2022. Streaming has its costs and challenges, but I have no doubt there were plenty of NASCAR fans Sunday wishing Flo Racing’s Chili Bowl crew got a shot calling the 500.

2. One Moran Down, Can the Mailman Still Deliver?

In their 19th & final race of Speedweeks, @DevinMoran99 & @WylieMoran99 finally finish outside of the top-10 for the first time.

Average finish of 3.9 over past 24 nights. pic.twitter.com/ooSPhSUcPl

The real work for the driver nicknamed “Mailman” however starts now, as longtime crew chief and brother Wylie Moran is leaving the No. 9 race team to focus on his own car-detailing business. DirtonDirt reported that the two brothers have been openly emotional about their impending split.

Family bonds aside, it’s a question worth asking. Can the hottest late model driver in the country keep it going with a midseason change in crew chief?

I’m personally inclined to say that yes, Moran will stay in form without a hiccup. Moran’s brother Wylie has said he will continue to join the team when possible on the road, and with Moran not following either the World of Outlaws Late Model or LOLMDS tour in 2022, it’s expected this his team will again run the lion’s share of races in the Midwest, close to the Moran home in Dresden, Ohio.

But put it in NASCAR terms. If Austin Cindric left Daytona with Jeremy Bullins saying sayonara, all eyes would be on the No. 2 team at Fontana, even more than usual for a Daytona 500 champion. All eyes will be on the No. 9 wherever they race next.

This is going to be a challenging year for the USAC National Sprint Car Series, namely because it has new competition in the form of the Xtreme Outlaw Sprint Series, which debuted at Volusia last week.

At the track, USAC didn’t fight a losing battle. Though Thursday’s feature turned into a rubbered-up parade at Bubba Raceway Park, Saturday’s finale saw young gun Emerson Axsom grab $10,000 in the biggest win of his career, capping off a Winter Dirt Games that saw USAC outdraw the Xtreme Series in terms of car count.

Still, leave it to a former USAC champion to take the sanctioning body to task for their handling of an episode on Friday involving another young gun in Briggs Danner. Per JJ Yeley, USAC officials essentially told Danner’s race team to pack it up even before track pack was done Friday night.

I was standing here when @USACNation offical told them to go load up….. #stupid. Should only be a matter of time that @Xtreme_Outlaw takes over

Now granted, Yeley was one night removed from losing a Daytona 500 berth on the last lap of his Duel race, so maybe he was just being venomous. And another race team offered a different perspective on what led to Danner’s de facto parking.

They originally called everyone to wheel pack and said if you don’t make it then you load up. They were minutes late, they didn’t have to fix the car from what the official told us. They just didn’t want to wheel pack so they were told to load up just as they were warned

That this story was allowed to fester on social media, between competitors, without any sort of address made by USAC on any of its own media platforms does not bode well for a series now facing direct competition and an already-existing exodus of talent; Tyler Courtney and Kevin Thomas Jr. have both transitioned to winged sprint cars full time, with Chris Windom and Tanner Thorson moving that direction as well.

I’ve already lamented this week that the Super DIRTcar Series had a terrible finish to its residency at Volusia on Saturday night, running a parade of a race on a rubbered-up track that ended in a never-ending rash of flat tires.

Having said that, comparing those races to the UMP modifieds that ran on Volusia the week prior was a night and day difference (though I will concede Nick Hoffman’s dominance in UMP cars was at least partially responsible for this). The Super DIRTcar machines I will go to my grave calling the ugliest racecars on planet Earth, but damn if they don’t race well.

This year marks a continuation that sees the two different forms of modifieds expanding beyond their traditional footprints; the center-drive modifieds are back for another year of the Short Track Super Series Cajun Region in Louisiana and Texas, while the IMCA modifieds have established a touring series to race in New York and Pennsylvania starting this year.

Having said that, maybe it’s just because the tracks I frequent aren’t in traditional modified country of any type. But there’s a very different type of reaction in these parts when the center-drives come to town versus the UMP/IMCA-style mods. And there’s a reason that the 107 UMP modifieds that showed up at Volusia got this type of reaction on social media.

I speak as a convert: If you get the chance to catch the center-drive cars in action, take it. This is one fight where I’m rooting for the Yankees to prevail.

I’ve already written extensively this season about the ridiculous circumstances that transpired during the annual Ice Bowl super late model race at Talladega that culminated with Michael Page being disqualified, tarred and feathered, at least in part for following the rulebook.

Oh, the irony, to see yet another super late model race sanctioned by the Iron-Man Series suffer through the same asinine restart rules again.

I made the trip to 411 Motor Speedway this past Saturday for the annual Sweetheart race, one that was sanctioned by the Iron-Man brigade. And lap 1 saw the same ridiculous situation play out again. This time, it was Christian Hanger that benefitted from a rule provision that states in the event of a multi-car incident on the first lap, all drivers keep their starting positions on the ensuing restart.

As such, despite Hanger completely overdriving turn 3 on the opening lap and spinning after clobbering into a fellow competitor, the Tennessee driver was able to line right back up in position number six for the next restart as if nothing had gone wrong.

Seeing this in person just made it more frustrating. Hanger’s move wasn’t dirty by any stretch, but it’s absurd for a driver to be 100% at fault for bringing out a yellow and facing no consequence for it because it’s the first lap and there were other victims involved.

What’s more, that rule provision mitigated what could have been a worse day for Hanger; he ended up finishing 10th, going backwards in the feature with a car that clearly wasn’t handling well. That top-10 finish would not have happened if he had lost track position as he should have on lap 1.

Besides demonstrating what I’d consider a level of hypocrisy from the Iron-Man bunch (again, their own words stated that Michael Page taking advantage of this rule was part of the reason they disciplined him after last month’s Ice Bowl), I can’t fathom a valid reason why this rule remains in effect.

Yes, it’s a scoring challenge to try to reset a field that hasn’t completed a full lap given there’s only one scoring loop at most dirt tracks. And yes, opting to penalize drivers like that on the first lap introduces subjectivity where there currently isn’t any. But considering the Iron-Man rulebook already literally has a section called “judgement calls” in it, that ship has already sailed. Fix this.

6. Speedweeks Buffet Comes to an End

Today (Feb. 22) will mark the first time in 19 days that the country goes without a dirt-track oval race being run, as the Lone Star Stock Car Tour will be on a travel day in Texas. That’s one thing I absolutely love about this sport that NASCAR can’t compete with: If the race you’re watching sucks, just pick another one.