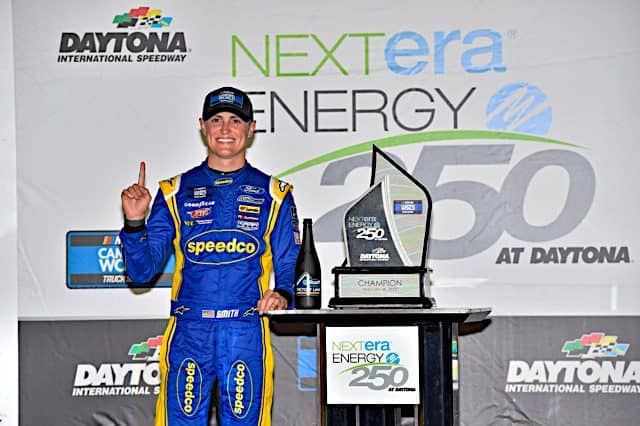 DAYTONA BEACH, Fla. – Zane Smith started the 2022 season with a new team, new number, new manufacturer and a win at Daytona International Speedway. After starting in 20th, the 22-year-old had found himself in the lead when the caution flag waved shortly after taking the white flag. Ben Rhodes finished runner-up and was followed by teammate Christian Eckes, Tanner Gray, and Parker Kligerman in the top five.

On lap 99, and mere feet away from taking the white flag, Eckes was the race leader. Smith was underneath the ThorSport Racing driver and passing for the lead when a pileup of 19 trucks erupted behind them and the caution flag waved.

Everyone held their breath waiting for NASCAR’s decision as to who would be determined as the leader when the yellow flag waved and, as most assumed, the race winner. Under regular circumstances, Eckes was the leader when the field passed the last scoring loop, and thus would be the winner of the first race of the season. But that was before everyone in the NASCAR world found out the caution light button-pusher had lightning-fast reflexes.

It turns out, the caution had come out just barely before the leader crossed the start/finish line.

That, of course, meant that the field would have an overtime finish, and even though he had restarted on the front row, Eckes couldn’t hold off Smith was forced to settle for a third-place finish.

Everyone has a plan…

Before the race began, the word of the herd appeared to be “teamwork” among the garage area.

The close-quartered pack racing of superspeedway races allows many race teams and manufacturers to work with one another to push teammates to stay in the front – and out of trouble.

“Us Fords are going to do all we can to work together,” said the eventual winner Smith. “It’s really hard to plan something like that. I’m going to help out a Ford when I can.”

The Toyota fleet, which had completely swept the top six qualifying spots, had the same idea.

“Every single manufacturer has a new nose and a new tail, so the manufacturers want to frickin’ win this race,” said Tyler Ankrum, who made his first start for Hattori Enterprises. “I think all of us Toyota guys understand. We all want Toyota to win tonight. We all want to be the ones in victory lane. At the same time, we realize this means a lot to (our manufacturers) as well.”

Contrary to what Carson Hocevar said, Tyler Ankrum is all on board with working with his fellow Toyotas.@PitLaneLT caught up with him. Here him talk about tonight and his new ride with his new team. 👇#NASCAR @NASCAR_Trucks pic.twitter.com/RFJjyeD4KT

For the Fords and Toyotas, teamwork would have to be the way to go to stay up front, especially since they were outnumbered by Chevrolet drivers. One of them was Carson Hocevar, who didn’t share the same charge-to-the-front philosophy as his Truck Series counterparts.

“If they get off their plan, I’m sticking to my plan,” said Hocevar. “It’s like dodgeball. All the heavy shooters are going to take each other up front and somehow the quiet kids win.

…until they get punched in the face

For 99 laps, it seemed as though teamwork was going to make the Toyota dream work.

Ankrum was making a move to the outside and looked as though he may be able to make a run for the lead around fellow Toyota driver Eckes thanks to a push from another Toyota driver John Hunter Nemechek.

But with the white flag approaching, suddenly teamwork didn’t matter. Eckes moved up to block Ankrum. When Ankrum reacted, Nemechek kept pushing, and it didn’t end well for Ankrum or 18 other trucks.

Caution! We are headed to overtime at Daytona. pic.twitter.com/fqEmMpTev1

Hocevar, who wasn’t even scored in the top 20, was still confident in his plan to stay in the back – even when there was only one lap to go.

“I knew it was going to happen,” said Hocevar. “I just wasn’t sure when. I knew there were going to be trucks being destroyed.”

Listen to what he has to say 👇#NASCAR pic.twitter.com/TZrrMO6p2A

After the pileup and the final restart, it was every man for himself.

It was the Chevrolet of Kligerman that pushed the Ford of Smith around the Toyota duo of Eckes and Rhodes with two laps to go on the backstretch.

The vastly outnumbered Ford of Smith survived and took the victory, but he was only joined by the Ford of Gray in the top 10.

For 99 laps, the Toyota plan of staying up front together was successful but literally went up in smoke inches from the white flag.

No. of rookies in the top 10: None. In fact, none of them even finished.

Rookie of the Race: Alan – because he survived the longest (lap 103)

Point Report: Two-time championship runner-up Smith opens 2022 with a win and a berth into the Truck Series playoffs and holds the regular season point lead with 46 points.

Rhodes and Eckes sit second and third with 44 and 41 points respectively. Gray and Ty Majeski were able to stay out of trouble and now round up the top five. Teammates Chandler Smith and Nemechek, thanks to his two stage wins, sit tied for sixth.

Kligerman, Jesse Little, and Danny Bohn all round up the top 10 with 32, 31 and 29 points, respectively.

Yup got that right pic.twitter.com/msu2uOY9nB

Up Next: The Truck Series takes a weekend off before heading to Las Vegas Motor Speedway for the second race of 2022. Coverage for the Victoria’s Voice Foundation 200 Friday, March 4 at 9 p.m. ET on FOX Sports 1.