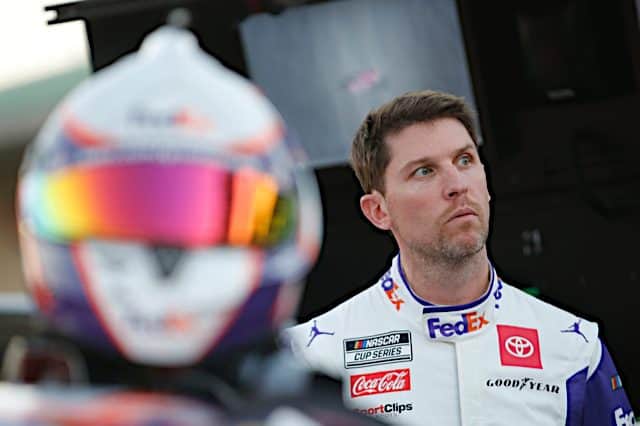 Who’s the favorite to win the Daytona 500?

Given the chaotic nature of races at Daytona International Speedway, it is incredibly hard to predict who will turn out victorious. There are several factors at play, and the race can often come down to who was able to survive all the crashes and attrition. That said, there are several drivers to keep an eye on.

For Denny Hamlin, the Daytona 500 has become his personal playground in recent years. With the exception of the 2017 race where he was involved in a crash, Hamlin has finished in the top five in every Daytona 500 since 2014. He has also picked up three wins in the process, including back-to-back wins from 2019-20, making him the first driver since Sterling Marlin in 1994-95 to win two in a row. Last year, Hamlin was one of the best cars, as he led a race-high 98 laps and managed to rebound for a fifth-place finish after being shuffled out of the lead during the final round of pit stops. Perhaps the Next Gen car will switch up the playing field, but Hamlin will always be one of the heavy favorites for this race until he proves otherwise.

Meanwhile, Hendrick Motorsports made a statement in qualifying on Wednesday, as Kyle Larson and Alex Bowman will lead the field to the green flag on Sunday afternoon. Teammates William Byron and Chase Elliott also clocked the third and fifth fastest times, respectively. However, a Hendrick driver hasn’t won the Daytona 500 since Dale Earnhardt Jr. in 2014, and Hendrick has come up empty-handed after dominating qualifying for the last eight years. However, Hendrick is fresh off of one of its best seasons of all time, and Elliott and Byron now have Talladega and Daytona wins, respectively, under their belt. Will Hendrick parlay its dominance from last season into a Daytona 500 victory this season?

While he hasn’t added a Daytona 500 win to his resume yet, Ryan Blaney has checked off every other box on the superspeedways, as he won the 400-mile race at Daytona last August and he has picked up two wins at Talladega Superspeedway. Blaney has blossomed into one of the best superspeedway drivers in the field, and Ford teams have traditionally dominated these races in the last few seasons. Blaney himself has also come close to winning this race in the past, as he led 118 laps in the Daytona 500 in 2018 and lost in a photo finish to Hamlin in 2020. If he can work together with teammate Joey Logano – who is also an elite superspeedway racer in his own right – he will be one of the heavy favorites when the laps wind down.

Will we see a calm race or a chaotic one?

Given the nature of superspeedway racing, races at Daytona and Talladega are prone to frequent crashes and Big Ones, and the Daytona 500 is no exception. In the last 12 Daytona 500s, eight of them have either gone to overtime or ended under caution. However, this year might be different. This will be the first points-paying race featuring the Next Gen car, and the drivers and teams are still adjusting to the changes.  In addition, there have been parts shortages for the Next Gen cars throughout the offseason, and the teams and drivers might decide to race conservatively in order to preserve their cars and equipment for future races.

But at the end of the day, it’s the Daytona 500. It’s the most prestigious race of the year, and everyone will want to win it. So, while the race might seem fairly tame in the opening and middle stages, things will pick up at the end, and within the final 10 laps, every driver will be pulling off every move that they can in order to end up crossing the line first after 200 laps and 500 miles.

Who has the best chance at pulling off an upset?

Since 2001, the Daytona 500 has been won seven times by a driver with five or fewer Cup Series wins. In the same time span, Michael Waltrip in 2001, Trevor Bayne in 2011, and Michael McDowell in 2021 have been the three drivers to pick up their first career Cup Series win in the 500. While the heavyweights like Joe Gibbs Racing, Hendrick and Team Penske have the best chances heading into the race, it is certainly not impossible for a smaller team to steal the spotlight. While the underdog Cinderella story of the Daytona 500 usually depends on who survives the crashes throughout the day, there are a few names to watch out for.

McDowell is the defending winner of the Daytona 500, and it was his first career win in his 358th start. McDowell has finished in the top 10 17 times throughout his Cup Series career, seven of which have come at Daytona. However, Richard Petty, Cale Yarborough, Marlin and Hamlin are the only drivers to have repeated as Daytona 500 champions, so winning two in a row will be a tall order for McDowell. But the improbable has happened before, and perhaps it will happen again on Sunday.

Justin Haley was the superspeedway king in the Xfinity Series. In eight starts at Daytona and Talladega between 2020 and 2021, Haley won four of them. He also picked up his first career Cup Series win – albeit under fortunate circumstances – at the 2019 Coke Zero 400 when lightning halted the race, and the ensuing rain ended the day. Haley also looked impressive in his first race in the Next Gen car two weeks ago at the Los Angeles Memorial Coliseum, as he was running top five all day until contact with Larson ended his day. Sunday will mark Haley’s first race as a full-time Cup driver, and if Kaulig Racing can whip up dominant superspeedway cars like it had in Xfinity, Haley might be a dark horse contender for the win.

Of the top drivers who have never won the Daytona 500, who has the best chance at ending their drought?

Of the active Cup Series drivers with at least 20 career wins, three of them have never won the Daytona 500: Kyle Busch, Brad Keselowski, and Martin Truex Jr.

For Busch, it feels like he has to win it at some point, right? In 2008, he was the dominant car and ended up fourth, and the following year he was once again the dominant car and was swept up in the Big One after halfway. In 2016, he finished third in a race dominated by Joe Gibbs Racing. In 2017, he was looking like a contender in the middle stages until he crashed from the lead with a flat tire. In 2019, he was outdueled by teammate Hamlin and finished second. The next year, he was leading with 20 laps to go until he suffered a blown engine that knocked him out of contention. And just last season, he ran in the top five all day before being taken out in a frightening last lap crash. With all of these near misses, one of them has to turn into a win eventually, right? But in addition to his Daytona 500 drought, Busch has also been on a long drought at the superspeedways. His last points-paying win at Daytona or Talladega was 14 years ago in the 2008 Coke Zero 400. Will this be the year where he finally puts it all together?

Keselowski has six wins at Talladega, tied for the second-most all-time behind Dale Earnhardt’s 10. He also has won the 400-mile race at Daytona, where he led a race-high 115 laps at the 2016 Coke Zero 400 en route to a dominating victory. However, Keselowski has yet to win the big one, and he is coming off a brutal defeat in last year’s race, where he was poised to take the lead in the final two turns before being sent into the wall and the catchfence in the same crash that collected Kyle Busch and others. Keselowski also came up empty handed in 2020, where he led 30 laps and was leading in the final stages before being taken out in the Big One with 17 laps to go. This year’s race for Keselowski will feature a new challenge, as it will be his RFK Racing debut. If he can work with his former teammates and survive the closing laps, he has as good of a shot as anyone.

Truex came so close to immortality in the 2016 Daytona 500, as he lost by just .01 seconds to Hamlin in a photo finish. Beyond that race, however, Truex’s superspeedway resume is rather weak. In 67 career starts at Daytona and Talladega, he has finished in the top five five times, and the top 10 just 13 times. Truex’s best superspeedway race in recent memory was at the 2020 Coke Zero Sugar 400, where he led 14 laps and finished fourth. Truex also finished second in the 2018 Coke Zero 400, where he was passed for the lead by former teammate Erik Jones on the last lap. Despite his overall lackluster performance at these tracks, Truex has had chances to win, and if he finds himself in a position to win on Sunday, it is up to him to capitalize on it.