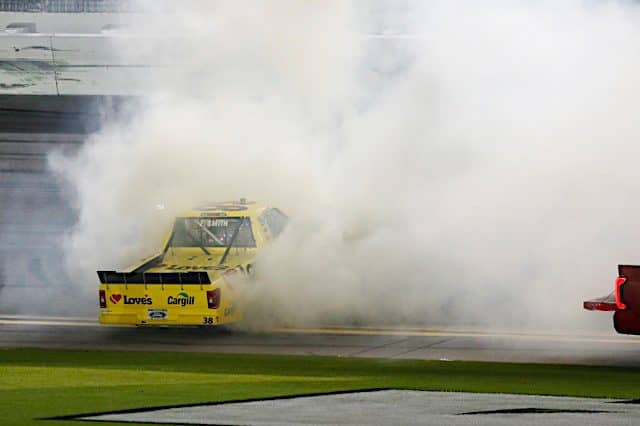 After surviving the Big One that began on lap 99, Zane Smith took the lead in overtime and held on to win the Camping World Truck Series race at Daytona International Speedway.

The win was Smith’s fourth in the Truck Series, his first at Daytona and his first at Front Row Motorsports after joining the team in the offseason.

The end of the race saw John Hunter Nemechek, Christian Eckes, Ben Rhodes, Tyler Ankrum and Smith go head-to-head for the win in the final 10 laps, but contact between Eckes, Nemechek and Ankrum sparked an 18-truck pileup that began just before Smith was about to take the white flag and end the race.

Following a red flag that lasted just over 15 minutes to clean up the carnage, Eckes led the field to the green. But shortly afterward, Smith received a crucial push from Parker Kligerman on the backstretch that allowed him to pass the ThorSport Racing duo of Eckes and Rhodes to take the top spot and the white flag. Shortly thereafter, a multi-truck crash ended the race under the yellow, and Smith was declared the winner.

“Something else [to win at Daytona],” Smith said. “Man, this place is its own, I’ll tell you that. Literally, my heart hurt during that red flag, I thought we had it. But man, just hats off to this whole group, they’ve really put the work in and it’s so damn cool to see when it pays off.”

Defending series champion Rhodes finished second behind Smith. Eckes, who was in the lead at the start of overtime, had to settle for third.

“I felt like we were in a good position there,” Eckes said.  “I felt like I was a sitting duck being the leader, and of course, it didn’t turn out that way. At the end of the day, really proud of these AHI Toyota Tundra guys. I wish we could’ve won, but good way to start off the year.”

Tanner Gray finished fourth, his best finish at Daytona. Kligerman ended up fifth after being shuffled backward in the final two turns.

Jesse Little finished sixth, tying his career best finish in the Truck Series. Polesitter Ty Majeski led 21 laps and rebounded to finish seventh after fading in the middle of the race.  Danny Bohn ended up eighth, while Carson Hocevar finished ninth. In his Truck Series debut, Matt DiBenedetto rounded out the top 10.

Nemechek won both stages and led the most laps in the race (50), but he had to settle for a 24th-place finish after being swept up in the Big One.

The 2022 Truck Series season began with Majeski and Nemechek leading the field to the green flag. Majeski jumped out to the early lead, as he led the first 18 laps before being moved out of the way by Nemechek on lap 19. Nemechek went on to win stage one on the following lap while Majeski faded to seventh.

Stage two was fairly tame at the beginning, as Nemechek paced the field in a green flag run that largely went single file. Things heated up in the closing laps, however, and Nemechek held off Rhodes in a photo finish to end the stage.

The beginning of stage three brought some new faces up to the front through pit strategy, and Colby Howard became the Cinderella story in the middle portions of the race. With just five Truck Series starts under his belt and a best finish of 13th at Darlington last year, Howard found himself in the lead at the beginning of stage three, and he managed to hold off Nemechek and the other front runners for several laps. However, Howard’s career race came to an early end, as he was left with a 30th-place finish after being taken out in the Big One.

After Nemechek got by Howard, he largely dominated the final stage until a multi-truck crash involving Jason White and Kris Wright set the field up for a 10-lap shootout. The inside line, led by Nemechek, did not have an organized restart, and this allowed the ThorSport teammates of Rhodes and Eckes to leapfrog Nemechek, with Rhodes taking the lead. Eckes then passed Rhodes for the lead with five to go, and this set up the chaotic final laps that cumulated with the Big One after Ankrum got turned by Nemechek when Eckes moved up to block their advancement.

After the battle between Eckes and Zane Smith in overtime saw Smith take the lead, it was a two-car crash in turn 1 on the final lap – involving White and Wright again – that gave Smith the victory.