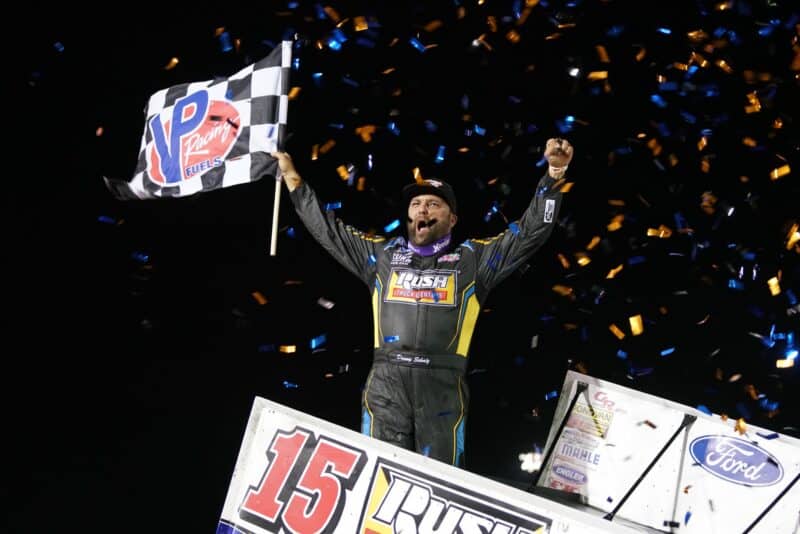 Donny Schatz appears to be in contender form for 2022, as the 10-time World of Outlaws champion won the DIRTcar Nationals opener in dominant fashion at Volusia Thursday.

Coming off what all admit was an off year in 2021, Donny Schatz kept Kyle Larson at bay on a restart with four laps to go, leading all 25 laps to win the first WoO feature of 2022 on a treacherous race surface at Volusia Speedway Park.

There will be no waiting in 2022 as @DonnySchatz and @TonyStewart_Rcg win right out of the gate!

The @FordPerformance, @AdvanceAuto, @Carquest #15 leads all 25 laps of the season opener, but not without fending off @KyleLarsonRacin on the final restart. pic.twitter.com/uBvVOyjtxw

The performance was vintage Schatz and saw the longtime sprint car veteran conquer any number of storylines. He kept Larson, the nation’s best top dirt racer the past two years, behind him in the closing laps. He capitalized, scoring a race win on a night that defending champion Brad Sweet suffered late-race trouble (more on that later).

Most notable though, was the story under the hood. After struggling with a redeveloped Ford engine last year, Schatz got the best of polesitter Aaron Reutzel from the drop of the green and never looked back; Reutzel made early-evening headlines by winning quick time and his heat race with a TRD-developed 410 engine under the hood.

Said Schatz of his win and the track conditions:

Schatz is not the only veteran driver opening 2022 with a resurgence. Brandon Sheppard and his Rocket Chassis house team have been on fire in Florida, sweeping Wednesday and Thursday night at East Bay Raceway Park in winning three Lucas Oil Late Model Dirt Series races already in 2022. That, coupled with Jimmy Owens’s dominating win at Bubba Raceway Park last week, has Rocket cars again competing with the Longhorns that owned late model racing in 2021.

Aaron Reutzel gave Toyota’s new sprint car engine a real strong showing in its first night of competition, winning fast time and a heat race before finishing third in the feature despite smoking for much of the race’s second half. For as disgraceful as Reutzel’s WoO rookie campaign ended up being last season, Thursday was a strong reminder of just how talented a racer he remains.

The battle that defending Short Track Super Series North Region champion Matt Sheppard and Mike Maresca put on for the middle stretch of Wednesday’s Sunshine Swing opener for the STSS at All-Tech Raceway was right up there with the late model action at Vado last month as the year’s best racing to date.

Perhaps the only rub about that amazing duel at All-Tech was that it actually happened on track in part because Maresca got run into the wall by the lapped car of LJ Lombardo on a straightaway.

Michael Maresca gets together with a lapper and Matt Shepard is gifted the lead on lap 12! https://t.co/UpbzgvMnML pic.twitter.com/Bs2AIAQoeh

Garrett Smith saw his heat win and stellar qualifying effort wiped out when he failed a spoiler height measurement and was DQ’d for the night. From what information was available on social media, late model racer Bobby Pierce seemed to think the infraction was Aaron Reutzel-level brazen.

If they’re putting illegal parts on the car that are obvious to the naked eye, imagine what else they’re doing 😎🤙

According to Racing America’s Matt Weaver, defending WoO champion Brad Sweet slowed on track and pulled off in the closing laps of Thursday’s DIRTcar Nationals feature at Volusia simply because he couldn’t see and had run out of tear-offs. The photo of his race team pulling mud from the front of his car was only topped by this fan shot of just how bad the track conditions were.

@MattWeaverRA, this is the 20 pound cloud of mud that flew over the front stretch catch fence, ultimately canceling the rest of the evening's show. pic.twitter.com/OBcQhmtSbj

Cup Series regular Alex Bowman managed to out-qualify his Hendrick teammate Larson and made the A-main in his WoO debut. However, in the feature Bowman broke a little over halfway into the feature and was credited with 21st place, failing to finish.

Truck Series regular Stewart Friesen climbed to the top five before hitting the wall and failing to finish the Sunshine Swing modified feature at All-Tech Wednesday night. Friesen qualified for Thursday’s feature as well but was a complete non-factor, finishing outside the top 15.

Defending Cup champion Kyle Larson finished runner-up in his heat race with one of the more visually impressive drives of the night, then finished runner-up in Thursday’s Outlaws feature. Larson was first in that he was the first person I heard anywhere in the state of Florida that had something positive to say about the Volusia racing surface.

I found the one guy who enjoyed Volusia today!

"I like it when it has character like that. (smirks) The Outlaw guys don't like it when there's a 2" deep rut but I like it. The line changes lap by lap. You're working harder than you would."

Kyle Larson on the Battle with Schatz. pic.twitter.com/hl0qdqPDWc

Kasey Kahne led the charge of WoO regulars that had harsh words to say for the Volusia track surface, wondering live on DirtVision what they had done to ruin such a great racetrack. No getting around it, the track surface was utterly awful on Thursday night, not up to par for a track that’s often mentioned in the same breath as the Eldoras and Knoxvilles of the industry.

Due to track conditions and driver safety, the remaining portion of tonight’s DIRTcar UMP Modified program has been postponed to Saturday afternoon.

While Kenny Wallace was one of many to come to Volusia’s defense (and yes, I can personally confirm that there’s been no shortage of rain in Florida over the last week), Wallace’s nonchalance about fan frustration over Volusia’s closure Wednesday night despite sunny weather allowing racing to resume at East Bay and All-Tech is a little off-base.

Race fans, just like racers, have to take time off work and spend plenty of money to attend Speedweeks. Losing a race night not because of weather, but because of questionable choices made by Volusia track officials to replace the clay surface with a clearly inferior product (check out the Sunshine Nationals replay for video evidence of that) is a valid reason for race fans to express frustration.

I can’t argue with Nick Hoffman about the math here, the truth is that the modified portion of the DIRTcar Nationals at Volusia features purses that are criminally low.

Having said that, when one considers just how often Hoffman himself has Tweeted pictures of his living room that prominently feature the gator trophies he’s won at Volusia in the past, there’s a reason these races pay so little. It’s the Chili Bowl for modifieds. Despite crappy money, 107 cars showed up for Thursday night’s race program.

Before DIRTcar mercy killed Thursday’s modified program, it wasn’t until 8:15 p.m. that the modifieds actually hit the track for hot laps at Volusia. Despite that car count and plans to run 10 features, DIRTcar still planned to run hot laps AND a qualifying session after that. HOT LAPS QUALIFYING IS A THING FOR A REASON! Absolutely ridiculous program format for a weeknight, Speedweeks or not. It doesn’t do this support class any favors to run programs so long that no one bothers to stay tuned in.

I’ve got to give a tip of the cap to Brandon Sheppard for how he’s handling the “hat dance” in Lucas Oil victory lane at East Bay, wearing a Lucas Oil ball cap properly without any hesitation or grimacing. There’s no need for this Hendrick Motorsports crap dancing around competitors’ logos. Do it like Sheppard did, put a Valvoline car in Lucas Oil victory lane and make sure your driver’s suit is loud and proud.

But as far as sponsor controversies go, no one is going to top the saga unfolding at Duck River Raceway Park, where the promoter reportedly told late model driver David Siebers to either duct tape his decals over or not race in their upcoming Winterfest event.

From our Owner/Promoter Abby Elizabeth Miller….Did you guys know that this year David Seibers ran this wrap pictured…

The track posted a statement suggesting they made the move they did to ensure a family friendly environment at the racetrack, and as a private business they absolutely have the right to do that. Though I find it amusing that anyone would assume that children are going to be completely free from seeing anything objectionable at a dirt track, be it fighting in the pits or shirtless attire in the stands.

The larger issue, one that’s now visibly brewing from the dirt ranks to the big leagues of NASCAR, is having race promoters and sanctioning bodies using their own personal sensibilities to dictate appropriate sponsorships. Given the current economic climate and the ever-increasing costs of racing, it’s a very dangerous precedent to start telling race teams what they can and can’t put on their cars.

If Duck River wants to play sensibility police, why not put some money up to sponsor Siebers’s car for the weekend instead of playing the ever-tiring “for the children” card?

38 – the number of tear-offs Kerry Madsen reported going through during Thursday’s DIRTcar Nationals feature at Volusia.

68 – UMP modifieds that took time in hot laps at Volusia Thursday night before the racing program was abandoned due to track conditions.

Where it Rated (on a scale of one to six cans with one a stinker and a six-pack an instant classic): We’ll give the weekend a reluctant three-and-a-half Landshark Lagers. Wednesday night’s STSS feature at All-Tech was damn good and Thursday’s LOLMDS feature at East Bay was the best the track has been all week. But Volusia proving to be utterly unraceable punches a real hole into Speedweeks.

Up Next: More Florida all the time. The World of Outlaws finish their residency at Volusia and the LOLMDS do the same at East Bay. Coverage can be found on DirtVision and MAVTV Plus, respectively.