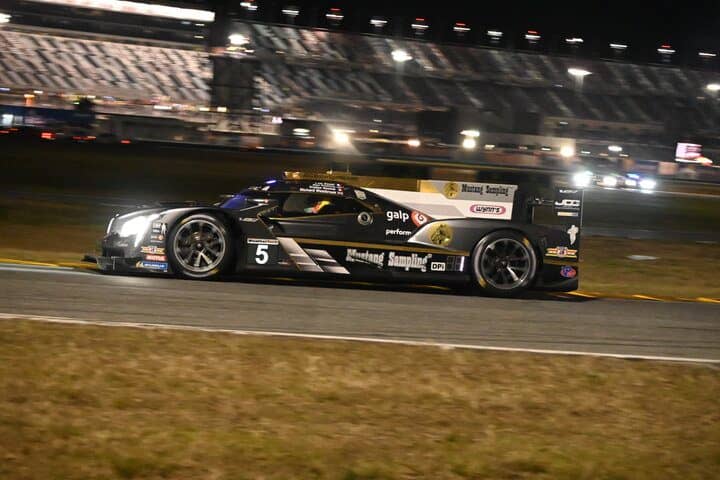 DAYTONA BEACH, Fla. – With 11 full course cautions, the battle of attrition continues after 12 hours of the 60th Running of the Rolex 24 at Daytona.

As of the halfway mark, the No. 5 Mustang Sampling Cadillac DPi leads overall, despite at one point spinning off the track.

However, both the Acuras of Wayne Taylor Racing and Meyer Shank Racing with Curb-Agajanian have appeared to be the cars to beat in the first half of the around-the-clock challenge. Their nearest challenger thus far has been the Chip Ganassi Cadillac DPi No. 02 team, which was shown 30 minutes before the halfway mark in a thrilling battle between Ganassi driver Earl Bamber and Meyer Shank driver Helio Castroneves.

But both challengers would find setbacks after their following pit stops, as Castroneves was given a drive-through penalty and Marcus Ericsson collided with the No. 31 Action Express Cadillac shortly after climbing in the car.

The duo’s calamity allowed the No. 10 Acura to retake the lead, and after a round of pit stops, Richard Westbrook took the lead in the No. 5. Despite his issues, Castroneves has already driven back to second, where he runs now.

NASCAR legend Jimmie Johnson also at last climbed into the No. 48 Ally Cadillac, thus beginning his first stint of this year’s Rolex 24.

The seven-time @NASCAR Cup Series champion and full-time @INDYCAR driver gets in the car for his first stint in the @Rolex24Hours at @DAYTONA.

Shortly after climbing in, however, Johnson found trouble early on the following restart that caused him to lose multiple spots.

Despite the DPi field’s issues, all seven teams are still running in P1 through to P7. However, the same cannot be said for the rest of the field.

Cautions six, eight, and 10 were displayed for stalled vehicles. The LMP3 of Jon Bennett driving for CORE Autosport stalled in the newly-named Le Mans Chicane on the backstretch. Later on, the GTD No. 59 Crucial Motorsports McLaren driven by Jon Miller came to a stop at the exit of the infield section of the circuit.

While those two teams were able to continue on, the PR1 Motorsports LMP2 of Steven Thomas went off on turn 6 early in hour 12. The ORECA was unable to refire and was towed back behind the wall.

While mechanical issues have been abundant, spins and crashes have come and gone as well.

In the LMP2 class, the No. 29 Racing Team Nederland ORECA of INDYCAR regular Rinus VeeKay leads with fellow INDYCAR regular Patricio O’Ward in tow in the No. 81 DragonSpeed ORECA.

For LMP3, the No. 74 Riley Motorsports Ligier of Kay van Berlo leads in-class.

Finally, the GTD Pro and GTD classes have been proven to be competitive all race long. The Mercedes-powered No. 97 WeatherTech Racing team leads the pro class with Maro Engel and the No. 70 Inception Racing McLaren of Ollie Millroy leads in GTD.