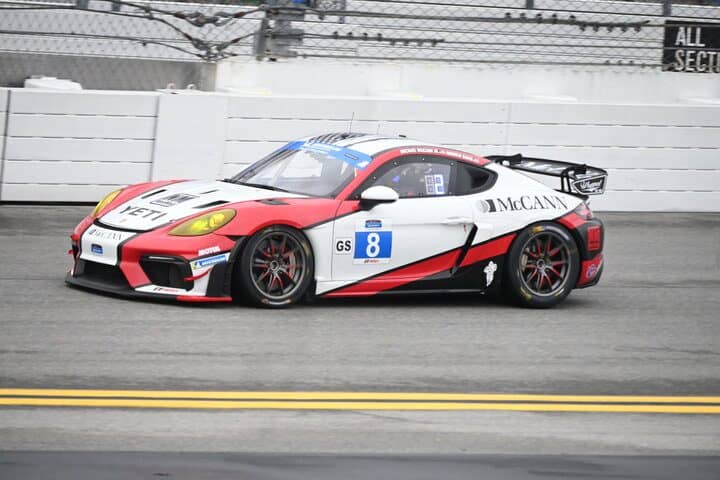 “It was great.  [The Porsche Cayman] is a new car for us,” Davis told Frontstretch afterwards.  “It’s a car that I’m very familiar with, but the team had to make quick work of it.  I can’t tell you how proud I am of the effort [the team] has put forth.  We struggled through the first couple practice sessions with a couple of little issues, so we hadn’t actually turned in a full lap until qualifying.  I was digging really hard to give the team something they could hang their hat on.”

For most of the session, it appeared that four-time Grand Sport champion Billy Johnson was going to put himself on pole for the first race of the year.  Johnson set a lap four-tenths of a second faster than PF Racing’s Hailie Deegan and continued to improve his time.  With only a couple of minutes to go in the session, Johnson pulled into the pits, thinking that his time was safe.

Not so fast.  A number of drivers continued grinding it out around the 3.56-mile road course.  Davis was one of those drivers, along with Rennsport One’s Stevan McAleer.  Davis, then McAleer, were both able to put themselves ahead of Deegan prior to their final lap on the clock.

On that final lap, Davis was able to make use of all of the draft that his Porsche could sniff.  The result was the pole in the team’s debut with Porsche.

Three teams did not set times during the session.  The Random Vandals Racing BMW didn’t as a result of Al Carter‘s crash in Practice No. 2.  TeamTGM’s No. 64 Porsche and Murillo Racing’s No. 72 Mercedes both ventured onto the track during the session, but did not complete a flying lap.

In TCR, unlike in Grand Sport, teams had a tough choice as to qualify on slicks or wet tires.  Some chose the wets.  Others went with slicks.  Bryan Herta Autosport’s Tyler Maxson went with the slicks and set a blistering lap at 105.194 mph to claim the class pole.

Unlike the last couple of minutes, Maxson’s lap was three seconds faster than anyone else in the class.  By the time the final laps were completed, Maxson’s margin was down to a little more than a second over AJ Muss in the No. 2 Hyundai for Bryan Herta Autosport, who also qualified on slicks.  The Alfa Romeo of Tim Lewis Jr. will start third, then JDC-Miller MotorSports’ Chris Miller.  Road Shagger Racing’s Gavin Ernstone will start fifth in his Audi.

Teams have had very little time on slick tires this weekend.  Many teams, especially in the TCR class, have none at all.  As a result, a 30-minute warmup scheduled for 9:25 a.m. ET Friday morning will be critical.  The BMW M Endurance Challenge is scheduled to go green at 1:35 p.m. ET Friday afternoon.  The race will be streamed live on Peacock.