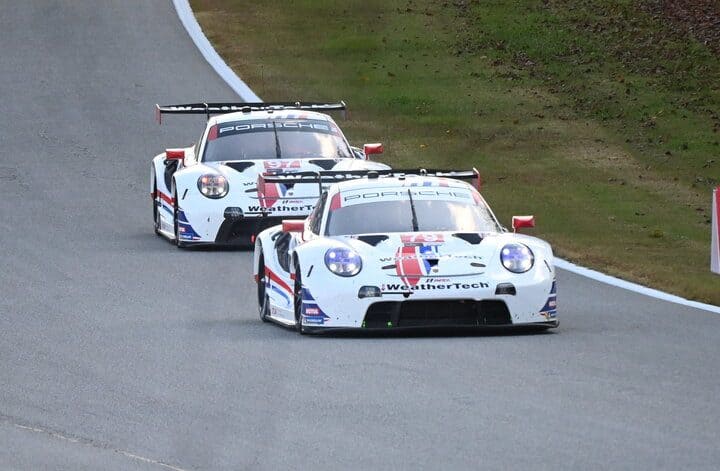 WeatherTech Racing announced Monday (Jan. 3) that they will field one full-time entry in the IMSA WeatherTech SportsCar Championship’s new GTD Pro class in 2022.  Proton Competition will continue to operate the team.  In addition, the team will have an extra entry in this month’s Rolex 24 at Daytona.  However, this isn’t your garden variety two-car team.

The No. 79 team that ran full-time in the GT Le Mans class in 2021 will run a Porsche 911 GT3 R.  This car will be driven by Julien Andlauer, Matteo Cairoli, Cooper MacNeil and Alessio Picariello.  Andlauer and MacNeil will drive this car full-time in 2022.

The No. 97 team, which only raced at the Motul Petit Le Mans in November, will run a Mercedes AMG-GT3.  MacNeil will also drive this car.  He will be joined by Maro Engel, Jules Gounon and Daniel Juncadella.  For now, the Mercedes is only scheduled to race at Daytona, although more races could be added.

Despite the difficulty of driving multiple different chassis in the same class, MacNeil is up to the challenge.

“The Rolex 24 is the equivalent of our Super Bowl,” MacNeil stated.  “Winning this race has been one of my racing goals since I started.  I’ve won Sebring twice, Petit Le Mans three times, been on the podium at Le Mans twice, been a multiple series champion, and now need to win the Rolex 24.  I’ve finished second at the Rolex 24 but they don’t give a watch out for second-place.  With two cars from different brands, I think we have good shot at being on the top step of the podium come Sunday afternoon on the 30th.  I am looking forward to the challenge of driving both cars and considering our driver lineup, I like our chances.”

In Andlauer, MacNeil is getting a new teammate who has never made an IMSA start in his career.  However, Andlauer, 22, is one of Porsche’s newest factory drivers.  He spent 2021 racing in the FIA World Endurance Championship’s GTE-Am class, the Asian Le Mans Series and Michelin Le Mans Cup.  Cairoli has limited experience in IMSA, but has been one of the fastest Porsche drivers in Europe over the past few years with Dempsey-Proton Racing and Team Project 1.  Picariello has one career IMSA start, that coming in 2018 at Sebring for Montaplast by Land-Motorsport, where he finished fourth in GT Daytona.  He is also a known quantity to Proton Competition, having driven in two races in Dempsey-Proton Racing’s No. 88 Porsche in the WEC last year.

MacNeil’s teammates in the No. 97, keeping with the general trend in drivers from last season, are all Mercedes factory drivers.  Engel split his time between a part-time schedule in IMSA, ADAC GT Masters and Fanatec GT World Challenge Europe Powered by AWS.  In IMSA, he won the GT Daytona class at Daytona with HTP Winward Motorsport.  In ADAC GT Masters, Engel finished third in points with teammate Luca Stolz for Toksport WRT.  He also took four wins and finished second in Fanatec GT World Challenge Europe Powered by AWS Sprint Cup points.

Gounon finished second in Fanatec GT World Challenge Europe Powered by AWS Endurance Cup points for AKKA-ASP with Raffaele Marciello.  He also ran in the Rolex 24 at Daytona for Risi Competizione in their Ferrari 488 GTE.  Juncadella ran full-time in DTM this year, where he finished ninth in points.  He also ran GT3 endurance races and finished fourth in GT Daytona in November’s Motul Petit Le Mans for Alegra Motorsports.