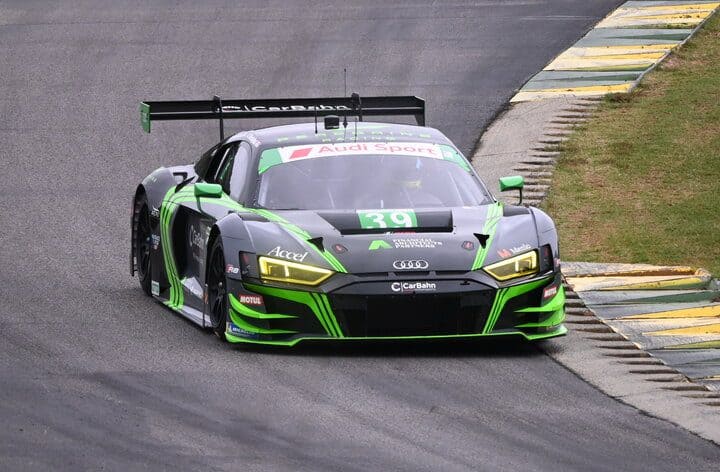 CarBahn Motorsports with Peregrine Racing officially announced Thursday (Dec. 9) after writing their release on Tuesday that they will expand to a full-time schedule in the IMSA WeatherTech SportsCar Championship in 2022.  With that move brings changes.  The most notable change is that the team is switching from the Audi R8 LMS GT3 to the Lamborghini Huracan GT3 Evo to race in the GTD class.

Jeff Westphal will return to the No. 39 for the full season in 2022.  He will be joined by Robert Megennis, who will replace Richard Heistand with the team.

“2022 will be an exciting year for the Carbahn with Peregrine Racing team,” Westphal said in a press release.  “We got our feet wet in the IMSA Sprint Cup for 2021 and now we are moving into the full IMSA WeatherTech SportsCar Championship, meaning that we add the crown jewels of sports car racing to the list—the Rolex 24 at Daytona, the 12 Hours of Sebring, Motul Petit Le Mans and Sahlen’s Six Hours of The Glen.  I am personally excited for the addition of new partners and relationships heading into 2022, not the least of which is our switch to Lamborghini, a brand with an aggressive and proven platform in years past that we’ll carry into the coming years!  This team has such a talented core group of individuals, and I know we are all eager to put 110% effort into the full season of IMSA competition.”

Megennis, 21, comes to the team after competing in the four Michelin Endurance Cup events for Vasser Sullivan in their No. 14 Lexus RCF GT3 alongside regular drivers Jack Hawksworth and Aaron Telitz.  In those four races, Megennis had a third-place finish in the Motul Petit Le Mans in November.  However, the team struggled in the other three races.  Outside of IMSA, Megennis has been an up-and-coming talent on the Road to Indy ladder.  He has run two full seasons in Indy Lights for Andretti Autosport.  He has one career victory (Indy Grand Prix Race No. 1 in 2019) and finished fifth in points that year.  This past season, he finished seventh in points with three podium finishes.  His best finish was a second-place finish in Race No. 2 at Road America on June 20.

“I am super excited to be joining Peregrine Racing, Carbahn Motorsports, and Lamborghini for the 2022 IMSA WeatherTech season,” Megennis stated.  “I’m eager to apply all that I’ve learned from racing in Indy Lights and from running the 2021 Michelin Endurance Cup to my first full year in sports cars.  [CarBahn Motorsports with Peregrine Racing] is an amazing team, Lamborghini is an incredible manufacturer, and I cannot wait to partner with someone as talented and experienced as Jeff [Westphal].  I know everything is there for us to win races this year, and I am thankful to SailPoint, Optimizely, DataRobot, Palantir, and everyone else involved for this opportunity.”

In 2021, the duo of Heistand and Westphal finished sixth in the WeatherTech Sprint Cup standings with a best finish of fourth at Watkins Glen in July.  The team ran best at Detroit, where they dominated the race and took the win on the track, only to get penalized afterwards for a refueling rig violation.

Team owner Mark Siegel indicates that the team will also continue to compete in IMSA Michelin Pilot Challenge in 2022.  In 2021, the team’s move into the WeatherTech Sprint Cup resulted in the team cutting back to one Audi R8 LMS GT4 in the Grand Sport class.  That one car was raced in both Michelin Pilot Challenge events and in SRO America Pirelli GT4 America SprintX races.

The team still has two more drivers to announce.  One will join for all four of the Michelin Endurance Cup races, while the fourth will be a Daytona-only addition.  Those announcements will be coming in the near future.