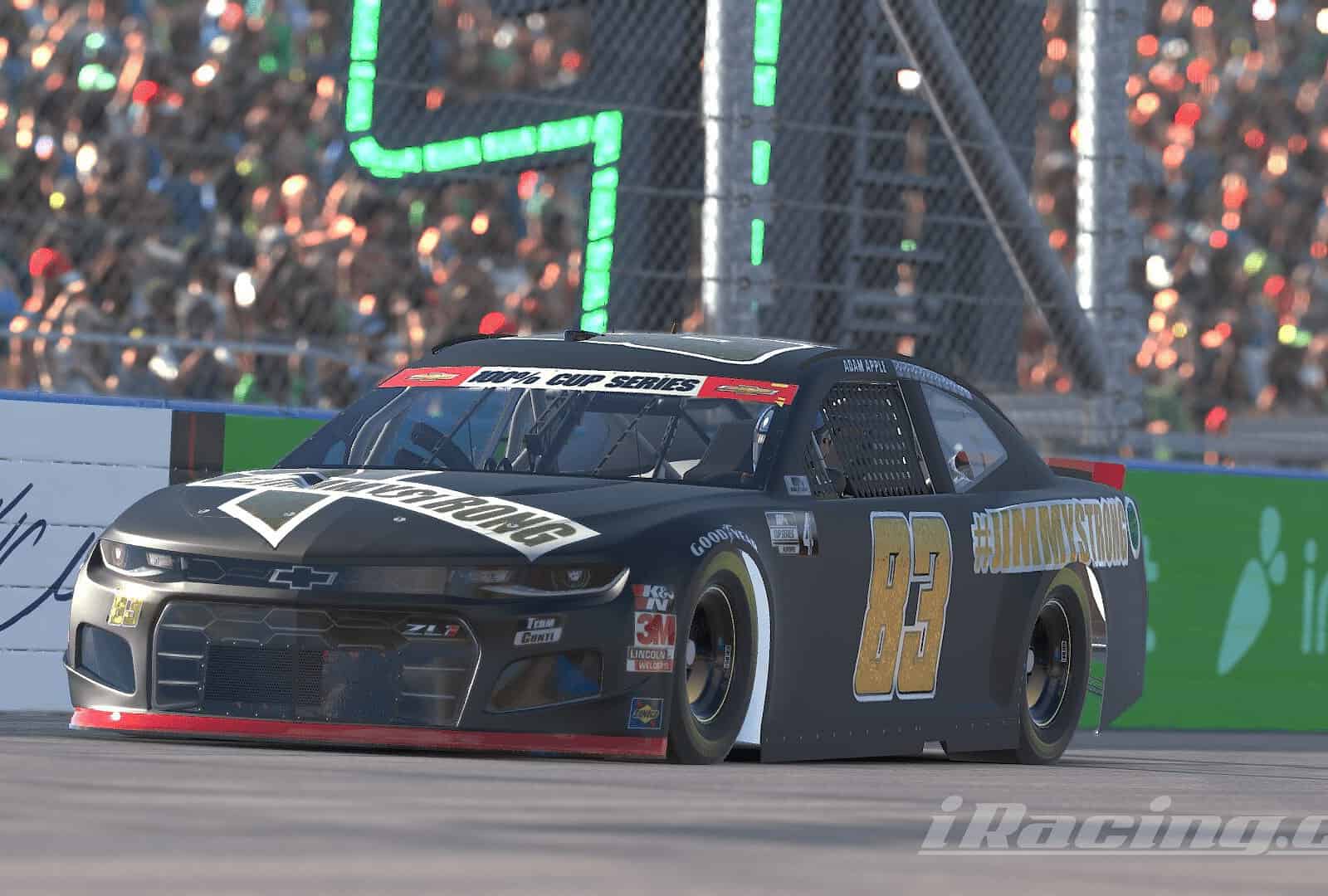 Photo by Demaris Hickinbottom via 100% Leagues

Things are picking back up again in the virtual world of iRacing. Monday Night Racing, eNASCAR Road To Pro and the CORE league are all starting up for their winter seasons, and S-ROC will soon join them in December.

Meanwhile, FTF Cup only has one race remaining and the 100% Cup Series is now completed with a champion crowned. Here’s how everything stacked up in this week’s iRacing Weekly Roundup.

The finale to a season’s worth of full-distance races, the 100% Cup Series concluded with a championship battle on Saturday night (Nov. 6) at Phoenix Raceway. While Jon Dulaney took the pole position, all four of the Championship 4 would start inside the top five with Cam Stone in third, Bryson Hixenbaugh in fourth and Adam Benefiel in fifth.

Robert Miller came to play spoiler, starting on the outside pole position. Miller led a nice 69 laps throughout the event, going as far to win the first stage. Like it is in NASCAR, the stages in the championship race are meaningless to the Championship 4, as the title always comes down to the highest finisher.

Benefiel ended up in control for the majority of the race. While all four took turns leading, Benefiel turned it up to another level. He led 208 laps, won the second stage, and eventually went on to take the Championship after winning the final event.

The Championship 4 all finished where they started, inside the top five of this 23-driver field. Dulaney took the runner-up in the title fight despite having the most wins, top fives and top 10s. Stone wound up third overall after completing more laps and attending more races than anyone else. Hixenbaugh had an incredible start to the season, but he, too, would fall short, coming home fourth overall.

From now until the end of the year, 100% Leagues will host two mini series on Fridays and Saturdays. The Friday league, the 100% Next Gen Challenge Series, will have four races at 9 p.m. ET. On Saturdays at 2 p.m. ET, the 100% Bush Winter Series will take the Xfinity Cars around for five events. Follow the 100% Leagues Twitter for more information.

The last chance to advance to the FTF Cup Series Championship 4 was also the site of the most-caution filled event in FTF history. Back at Martinsville Speedway for the Flatout Racing Network 250, drivers such as Brian Mercurio, Garrett Konrath, Brandon Hawkin and Alex Kolonics all found themselves in near-must-win situations entering the event.

With Tyler Garey and Blake Reynolds locked in, the final two spots were held by Kevin King and Michael P. Frisch. 36 drivers came out for the penultimate show, and although it was 15 cautions less than the spring, there were still plenty of incidents to witness throughout the night.

Kolonics started off the night in the right direction, winning the first stage and staying in the fight. Frisch, the last driver in on points, responded with his own stage win in the second stage. The night belonged to King, however. King led 111 laps of the scheduled 250, and was able to hold off Hawkin, Mercurio and Konrath for the win and ticket to the Championship 4.

The @BarrVisuals Round of Champions will conclude on Sunday Night with the @KicknTheTires Championship Finale 200 at Phoenix Raceway, live on @BottomSplit at 8:00 p.m. ET.@blakereynolds66@PFrisch_@kkingstyle@ragtag26https://t.co/I1qw5csAPi pic.twitter.com/dJHCVGsltE

The quartet of King, Frisch, Garey and Reynolds will square off on Sunday night for the final time at Phoenix Raceway. The highest finisher of the four will become the 2021 FTF Cup Series champion.

Following a record debut for the series a week prior, Monday Night Racing presented by Rowdy Energy returned with a different car and track combination for the second week of battle in Season 4.

James Bickford started on the pole position, but Kyle Busch took control early on. Rajah Caruth was strong for most of the night, taking the lead from Busch before an untimely caution just after pit stops cycled. Bryan ‘Boris’ Cook took control for a moment, but it was his Joe Gibbs Racing teammate Busch back in control before long.

As things started to wind down, eventually Collin Fern found his way to the front of the field for the final few restarts. Fern was able to hold off Busch for his first win in two career starts in the series, qualifying him for the playoffs should he meet the start requirement.

After two races, it’s Fern and David Schildhouse atop the standings, both with a victory to their name. Season 2 champion Will Rodgers holds the final spot in the playoffs so far, but he’s just barely ahead of Busch for the 10th position.

Frontstretch Motorsports had a slightly better outing than they did in the first race. Michael Massie picked up a 15th-place finish while Drew Welker was 28th and Garrett Miller was 31st.

A caution-free race at Homestead-Miami Speedway sounds great on paper, but the race was a bit of a mental game to some of the eNASCAR Contender iRacing Series participants. When to pit, how hard to pit, and how hard to race were some of the thoughts on these drivers’ minds as they navigated the 1.5-mile oval for 134 circuits.

Parker Retzlaff started on the pole with Kaden Honeycutt alongside. Honeycutt led the majority of the race, but it was the final pit stop that made the difference. Kollin Keister ran the undercut and got a huge advantage in just a few laps. He was able to keep his tires under him and held off a late charge from Cody Byus to win the race.

Lets gooo! Winners at Homestead. Car was a rocket all race! Big thanks to everyone at @NorseForceRL for the help this week. pic.twitter.com/GDEIpClN5v

Keister and Retzlaff share the points lead after two races. The Top 20 will advance to the eNASCAR Coca-Cola iRacing Series in 2022.

Check out the broadcasts over on iRacing or on Podium 2.

A new league to the roundup, CORE returned to action for its fourth season on Thursday night. The previous night, a pair of duel races set the lineup for the Daytona 250. Trey Normile (RawGator) laid down the fastest lap of the event to take the pole position, starting alongside Harry Tiller.

Through the event at the old Daytona oval, utilizing the ARCA Menards Series cars on the iRacing service, there was close quarters racing, oftentimes resulting in hellacious incidents. Normile went on to win the first stage while Michael P. Frisch took home the second stage win.

The final battle for the win saw four rows of three-wide racing for the victory. Up high, it was Erich Keplinger. In the middle, Briar LaPradd. Down low, Joey Stone led the way. The pack came together, wrecking off turn 4, and somehow it was this writer, Justin Melillo, taking the victory.

Melillo leads the points by five over Keenan Kusan (Aeroteq) as the series heads to Iowa Speedway next week.

Check out the broadcasts over at CORE.

FTF RACING: The FTF Cup Series will conclude at Phoenix Raceway with the Kickin’ The Tires Championship Finale on Sunday night, live at 8:00 p.m. ET on BottomSplit.

MONDAY NIGHT RACING: Race 3 of the fourth season of Monday Night Racing presented by Rowdy Energy will bring the Super Late Models to Michigan Int’l Speedway. The broadcast will start at 8:00 p.m. ET on Podium 2.

eNASCAR RTP: The Road To Pro ladder continues with the third race of the eNASCAR Contender iRacing Series at Auto Club Speedway on Tuesday night. That broadcast will start at 9:00 p.m. ET over on iRacing or on Podium 2.

CORE: CORE returns for the second race of the fourth season at Iowa Speedway on Thursday night. The broadcasts are produced in-house and will start at 9:00 p.m. ET.