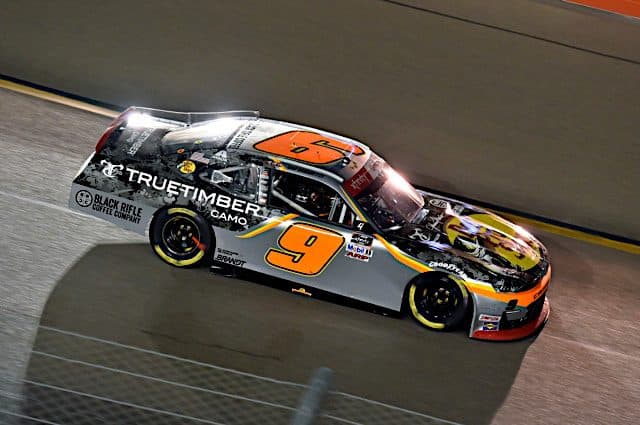 PHOENIX — Noah Gragson didn’t have the speed to contend for the NASCAR Xfinity Series race win and championship on Saturday (Nov. 6) at Phoenix Raceway, but he wound up having a shot at the end, restarting inside the top five.

That’s when the No. 9 slid up and smacked the outside wall in turns 1 and 2. Miraculously, he stayed out and was able to salvage a 12th-place finish, falling short of the championship and finishing third in the overall standings.

“I have no clue,” he said of the late-race incident. “I felt like I was pushing a hundred percent. I don’t feel like I jumped over it. It just shattered the right rear tire. I didn’t know if I had a tire down, if I hit oil, what it was, if I got into marbles on entry. I was definitely trying to push the tire to its potential. Threw it away.

Even if he avoided the wall, Gragson was still lacking speed, grip and drive off the corner. Crew chief Dave Elenz pitted him in the final stage for fuel only, going off sequence to just try something different since whatever they had underneath the car wasn’t working.

“We’re kind of disappointed just with the overall speed we had this weekend,” Gragson said. “We just got beat by those guys. They brought their A-game, and we didn’t have the balance we needed to go compete. We never quit. Had an opportunity there at the end. That’s what matters most.”

When asked what he and/or the team needed to change in order to be better if the opportunity arises next year to run better at Phoenix, Gragson deadpanned about the former championship finale, a track where he’s led a career-best 208 laps throughout his career.

“Make it into Homestead(-Miami Speedway),” he said.

Gragson also revealed on Thursday at Championship 4 Media Day that Elenz will not return to JR Motorsports next season, marking the end of a three-year-long partnership dating back to 2019.

The two rode up and back from Martinsville, where the No. 9 won in dramatic fashion to become Championship 4 eligible and reflected on the time they’d spent in the Xfinity Series.

Today @JRMotorsports crew chief Dave Elenz works his final event before moving to the Cup series next year. When any employee receives a greater opportunity, that is more enjoyable than any trophy. Dave deserves it. He is a winner who always shared our vision. He will be missed.

“Just getting to spend that time with [Elenz] was special. I’ll miss him,” Gragson said. “He’s not going to be there, but he’s not going anywhere either in my personal life. Just thankful to get to know him over the years. Would love to have a good crew chief step in for us. We don’t really have anyone right now. I don’t know if Chad Knaus or something is available. We’d love you to come to the [No.] 9 team, Chad, or someone else.”

Pretty sure Noah Gragson tried to recruit him as Noah was leaving the media center https://t.co/6UwR7KxBkx

With Daniel Hemric, who Gragson had a run-in with earlier this season, winning the title, he was able to put the differences aside and reflect on the accomplishment of hoisting the hardware.

As he was exiting the media center, Austin Cindric teased Gragson about a specific body part he signed earlier in the day. A rough finish to the race, yes, but still time for Noah to be Noah.

“I try to go above and beyond and fulfill the fans’ request to an extent,” he said with a smile. “I felt with the social distancing of my fingers on the back of a Sharpie, it was acceptable.”

Gragson will now turn his attention to the offseason, which will be filled with some extracurricular racing and celebrations from the aforementioned Martinsville triumph.

“I didn’t party after Martinsville just because I want to be really clear-minded coming into this weekend,” he said. “Tried to stay dedicated to the workout program with Josh (Wise) for the last couple months. Waking up Monday morning at 6 (a.m.) to go on a run over at Josh’s house at 7, you can be a little hungover on Sunday, but I try not to carry that over to Monday or anything throughout the week these last couple months.”

Sure, a 12th-place finish wasn’t what he was looking for in the season finale. But that’s nothing a Red Bull Vodka (his choice) can’t fix, along with some well-deserved partying for a Championship 4 appearance as the offseason begins.

“Yeah, it’s [time to] just kind of really let the dogs out.”

GRAGSON RETURNING TO JR MOTORSPORTS IN 2022