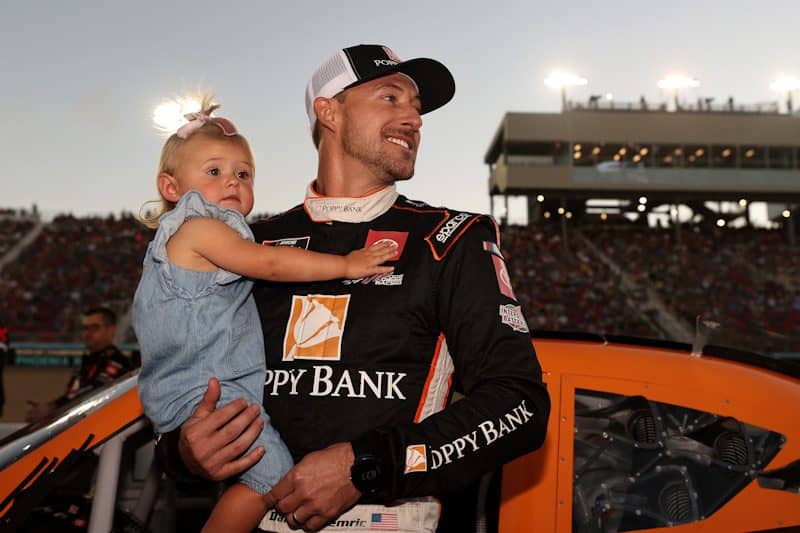 With two turns left and a championship on the line, he wouldn’t settle for No. 11.

Hemric nudged fellow title contender Austin Cindric out of the way, then won a drag race to the line to earn the 2021 NXS championship Saturday night (Nov. 6) at Phoenix Raceway. It’s his first race victory in 120 career starts, taking advantage of a NASCAR Overtime restart caused when Jade Buford and Josh Williams crashed on the backstretch.

A FINISH FOR THE AGES!

“Unbelievable. These guys asked me all year how bad I wanted it,” Hemric said in his post-race interview after backflipping off his race car. “I’ve given up a lot. People doubted me. I’ll do it all over again for a night like this.”

For much of the final two laps, Hemric’s front bumper was just barely to the inside of the No. 22. Headed into turn 3, the two cars touched ever so slightly, then rubbed fenders all the way from there to the checkered flag.

“I blacked out. I had to be the first one to the line […],” he explained. “I was close enough to not use him up. We worked our asses off for an opportunity for this. What an honor.”

Cindric had to settle for second in both the race and championship, losing his opportunity to go back-to-back. Pressed about the move at race’s end, Cindric made clear the move was legit.

“He’s over there,” Cindric said, pointing to where Hemric sat in victory lane. “I’m over here. He’s the champion… If everyone in the stands enjoyed it, it’s good racing.”

Harrison Burton finished third while Riley Herbst wound up in fourth. Justin Haley rounded out the top-five finishers in his last full-time NXS race before moving up to the NASCAR Cup Series in 2022.

The other two Championship 4 contenders, Noah Gragson and AJ Allmendinger, finished much further back. Gragson pushed it too hard on a late restart, hitting the outside wall and damaging his No. 9 Chevrolet while trying to challenge from third place. He slid to 12th in the final rundown.

Allmendinger, despite a five-win season, was never truly in contention. He struggled with an ill-handling car, running around fifth to seventh the whole night before a loose right-rear wheel caused a spin with 19 laps remaining and Cindric out in front. The incident caused a caution, bunching up the field and inevitably dropping ‘Dinger down to 14th.

See also
Noah Gragson Falls Short at Phoenix: 'We just missed it as a whole'

In the owner’s championship, John Hunter Nemechek fell short in his bid for Joe Gibbs Racing although he took the lead at the start with the No. 54 Toyota. Cindric fought back early, able to retake the top spot and maintain an advantage for most of stage one.

Hemric was lurking around in third, running down the top two through some lapped traffic which allowed him to make up time. It wasn’t enough, Cindric winning the stage with ease as the No. 22 asserted itself as the car to beat.

Hemric was able to get out ahead between stages with his pit stop and took the lead out of the gate in stage two. Jeffrey Earnhardt brought out the first caution for an incident during this stage, as his No. 0 machine spun around and sat at the inside wall on the backstretch.

Once the race went back to green, Hemric remained out front ahead of Cindric. For a time, Nemechek was able to mix it up with them, making it a three-car battle. Hemric was able to eventually pass Nemechek as well as Cindric to wind up the winner in stage two.

The final stage had a number of wrecks, one involving IndyCar star Sage Karam as he nudged Joe Graf Jr. into the outside wall. Karam would later mix it up with Matt Mills in a rough NXS race running the No. 31 for Jordan Anderson.

Up front, Cindric got by Hemric for the lead and held on for much of the final stage. The 2020 champion was comfortably ahead, in position to win until Allmendinger’s spin bunched up the field. The incident caused Allmendinger to apologize for Cindric for causing the caution.

“The wheel was coming off on the right rear,” Allmendinger said. “I apologize to Austin because I think he had the race probably won. I don’t want to be part of the storyline like that.”

Instead, the storyline changed to a fairy-tale ending for Hemric, earning his first win and his first championship all at once.

“What else am I going to go do? Racing is what I know, racing is what I love,” he said when asked what kept him going through the long winless streak. “Like I said, you throw in the family element, got to provide for them. This is what I know to do. I got people willing to have my back, push me to be a better person today than I was yesterday.

“Yeah, I’m going to keep this going. It’s because of those people that were standing here tonight.”

Good ol days, good race. Cindric interview moved him up a notch or two in my book.

Cindric is a classy guy and a clean racer. He’ll do well in the #2 car next season. Yesterday was was just Hemric’s day. He had a heck of a car, and his team didn’t make any mistakes.