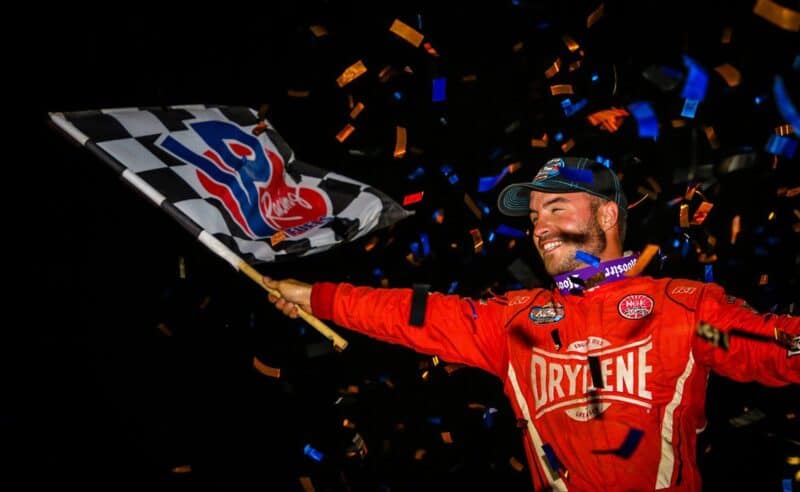 Capitalizing on a mistake by race leader Sean Becker on lap 13 of 30, Fremont, Calif.’s Shane Golobic skirted past to the lead and a $10,000 win on a narrow and tacky Keller racing surface Friday night in one of the biggest-paying 410 sprint car features the state of California has seen in 2021.

.@ShaneGolobic goes up top to celebrate his first series victory of the year! pic.twitter.com/ADQ21dDEKV

With disappointing track conditions dimming the shine of Friday’s feature race (more on that later), the bigger story of the night happened during the nightcap wingless sprint car feature. Not only did 2021 All-Star Circuit of Champions champ Tyler Courtney become the first non-NARC regular to win the wingless race since 1985, but his win was also the first by a sprint car utilizing Toyota Racing Development’s sprint car engine.

Score one for the local guys, with Meridian, Miss.’s Chad Thrash keeping a hard-charging Spencer Hughes at bay on a restart with 10 laps to go, driving off to what may be considered an upset victory in the 70-lap feature Saturday night at Pike County. The driver did call the win the biggest of his career in victory lane.

Chad Thrash Wins The Jambalaya 100 In Dominating Form! What A Race!

Though the field was likely watered down a bit with the National 100 also racing in Alabama this weekend, Thrash was dominant, leading flag-to-flag despite starting the race alongside Lucas Oil Late Model Dirt Series regular Tyler Erb, who won Friday’s $3,000 preliminary race and was in a league of his own in heat race competition earlier in the evening.

2021 USMTS champion Dereck Ramirez was left breathing a sigh of relief Saturday night, as three rainouts in a row for the tour made it mathematically impossible for Jake O’Neil to pass him in the series standings. That proved to be a huge deal, as O’Neil picked up right where he left off at Vado on Sunday, winning a B-main and storming to the front of the field, taking the lead from veteran Terry Phillips on the backstretch with two laps to go to score his series-leading 10th win of the season.

Making a legendary charge from the b main, Jake O'Neil doubles up in the @USMTS Spook-tacular! pic.twitter.com/tbNI3McY8V

Polesitter Lucas Schott led the opening 28 laps of the event, but got visibly tight as the race progressed and left vulnerable on a lap 29 restart, where Jason Hughes got underneath him in turn 2. Hughes, however, never saw the race lead, as on the same restart, Phillips used a hole-shot run through turn 2 to get alongside Hughes on the high side, taking the race lead for himself exiting turn 4 on lap 29. Phillips would continue to lead the remainder of the 40-lap feature, which stayed green for the duration, until O’Neil completed his race-winning pass.

Logan Schuchart spoiled the party for prospect Ayrton Gennetten, blowing by the No. 3 car on the high side of turn 4 with seven laps to go and driving off to his third consecutive win in the Texas Dirt Nationals at Devil’s Bowl, the birthplace of the Outlaws.

It’s a family tradition. ?@LSchuchart1s’s 30th career victory ties him with his grandfather @BobbyAllen1a on the all-time World of Outlaws wins list! pic.twitter.com/b8Fu0zBxds

Gennetten, who already had enjoyed a career night after scoring his first career WoO dash victory, led the opening 24 laps, but was visibly struggling on the exit of turn 4 for a number of laps before Schuchart blew by him for the race win.

The Outlaws also ran Friday night, with Carson Macedo scoring his 11th win of the year in dominating fashion at the Lawton Speedway in Oklahoma, stomping the field in a 35-lap feature that went caution-free.

Macedo may have fallen short of challenging for the series title in 2021, but scoring 11 wins in his debut season with Jason Johnson Racing is nothing short of a tremendous success for the driver that was left without a home after Kyle Larson Racing disbanded last season. Said Macedo in victory lane, the goal for 2021 was to win five races and be consistent. Something tells me this team will be aiming much higher in 2022.

The big guns of the World of Outlaws late model ranks both made some noise in modified competition this weekend. Series runner-up Chris Madden won a heat race and finished second in the modified feature at Charlotte on Saturday, while 2021 series champion Brandon Sheppard also won a heat race and scored a top-five finish in Saturday’s USMTS feature at 81 Speedway.

Great weekend many thanks to Dan Davies for the opportunity to drive his modified.?? pic.twitter.com/LOaVbOPRuK

Snyder, Okla.’s Shane Little made the move of the night Friday in the first limited modified heat at Lawton, using a three-wide middle pass in turn 4 to steal the lead (and eventual win).

It was quite a night for the Pauch family at the Georgetown Speedway in Delaware Saturday night, with Billy Pauch Jr. taking the Short Track Super Series feature win and Mike Mahaney clinching the series championship.

Let’s talk about the family sweep @thegtownspdwy tonight ? @billpauch picked up his 5th straight victory at Georgetown and @mikemahaney_ clinched his first ever @ShortTrackSS championship!! Damn straight ?? One proud sister and fiancé ? pic.twitter.com/t6s8l2NklF

It’s hard to decide who was more vexed by the rainouts that gutted three of the four races that the USMTS title chase was supposed to finish with: series runner-up O’Neil, who had enough speed and momentum to make Dereck Ramirez sweat, or all the race fans that didn’t get to see one of the most competitive points races in 2021 dirt racing play out on track. O’Neil’s strong ending to 2021 has already been discussed, but seeing both Ramirez and O’Neil in protracted side-by-side battles multiple times during Saturday’s feature was a cruel tease of what could have been.

WoO veteran Kraig Kinser failed to even start Saturday’s feature at Devil’s Bowl. He broke in hot laps, forcing his team to change engines. That changed engine blew up … two laps into his heat race.

Everything is bigger in Texas, and unfortunately for Kraig Kinser, his motor bill is going to be Texas-sized ?

I’m pretty sure I’ve already commented at some point this season about feeling skittish seeing race fans bringing propane tanks with heaters attached into racetrack grandstands, but seeing that practice utilized at Pike County on Saturday, where the grandstands are wooden, made me shiver.

No getting around it, Friday’s NARC program at Keller was a messy display. The track surface never widened the entire night, a supreme disappointment given that this was a rare weekend where the purse and entry list had all eyes on the West Coast for 410 sprint car racing.

On a night where all the eyes were on California it was definitely not the look needed. I am begging west coast promoters to lose their water truck keys https://t.co/QpIfRw1o84

Add onto it that the track’s scoring loop went down, leaving the fans in the grandstand without a scoreboard and the viewers of the web stream without a ticker or a lap counter, and it’s no wonder 410 sprint car racing is all but extinct in California. Can’t blame the environmentalists for these issues.

Let’s go with something positive here. While doing my dirt race streaming routine Saturday afternoon and evening, I had the Frontstretch group chats up and running, where the focus was on Martinsville … and a huge volume of lamentation about how much gimmickry the NASCAR telecasts were using to make Halloween part of their broadcasts. Well, credit to DirtVision, Racin’ Dirt and Flo Racing, as none of these streaming services did any such thing. In fact, the only Halloween reference to be found Saturday was the fake cobwebs strung up the flagstand at 81 Speedway. Leave it to the internet to show the networks how it’s done.

Two things about 2021 DIRTcar Summer Nationals modified champion Nick Hoffman. One, he’s the undisputed modified driver of the year, a title cemented ever further with Hoffman sweeping modified features at Charlotte on Saturday. Two, he’s really a racing snob of sorts. I can understand why he had no shortage of hobby racers going after him on social media at Charlotte Saturday afternoon. Revving engines at a racetrack?!? The horror.

It’s not even 12 o’clock and the bang bangers are already stretching the rods on these things in the pit area. That’a bad racing etiquette. We hotlap at 2 so at least wait til 1 to fire up your Honda Civic

It was hard not to laugh at watching track officials use their fists (and no duct tape) to bang down Tyler Davis’s hood after it popped open on lap 13 of Saturday’s USMTS feature, then to see the same hood pop up again and bring out the yellow flag in turn 2 of the very next green-flag lap. There’s a reason sheet metal repair should be left to actual pit crews rather than track officials, even if that’s how every single dirt series in America seems to handle it.

It wasn’t 15 minutes into Saturday’s racing program at Charlotte that I was left frustrated. The first race of the afternoon to hit the track was the first 604 late model last-chance race, one that started four cars short due to damage incurred the previous night for several racers. As a result of the short field, race officials chose to cut the heat race length from eight laps … to a green-white-checkered race. It’s a common practice to cut preliminary-race lengths for short fields, but a 75% reduction, and a two-lap LCQ in general, is an absurdity, especially when one considers that the Charlotte race surface hadn’t even been hot-lapped on Saturday afternoon.

64 – number of World of Outlaws features contested at the Devil’s Bowl in Texas, the site of the series’ first race in 1978.

Where it Rated (on a scale of one to six cans with one a stinker and a six-pack an instant classic): We’ll give this midweek three and a half hurricanes to go with the jambalaya. A decent Outlaws finish at Devil’s Bowl and a well-raced conclusion to the USMTS tour were leveled out by a poor sprint car show at Keller and a snoozer of a Jambalaya 100 at Pike County.

Up Next: It’s another strong midweek of races. Sunday (Oct. 31) sees the $20,000-to-win National 100 super late model race on Flo Racing. Monday (Nov. 1) will have the inaugural “Prelude to the Finals” paying $7,500-to-win for super late models and $5,000-to-win for 410 sprint cars at Cherokee Speedway on Pit Row TV. And Tuesday and Wednesday (Nov. 2-3) will see the Carolina Micro Showdown contested for $10,000-to-win at Millbridge Speedway on DirtVision.