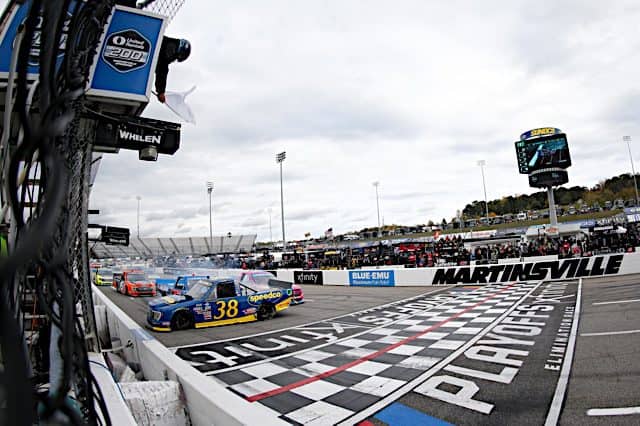 In a Nutshell: Zane Smith emerged from chaos, smoke and banged-up trucks at Martinsville Speedway to win Saturday’s (Oct. 30) NASCAR Camping World Truck Series race and secure a spot in the Championship 4. Smith was 40 points back of the cutline and in a must-win situation on a mild afternoon in southern Virginia, leading 65 laps prior to losing the lead as the laps wound down.

Then, as if it hadn’t already, all hell broke loose.

On an overtime restart, Todd Gilliland — who’d led 133 laps and swept the stages — restarted in front, alongside Stewart Friesen, but Smith poked his nose underneath to make it three wide down the backstretch. The trio of trucks stayed that way all the way to the white flag when Friesen turned left and down, hooking Gilliland and spinning him into the outside wall.

With the caution out, Smith claimed his first win of 2021 and third of his career, and just the second top five of his campaign. Smith, along with Matt Crafton, John Hunter Nemechek and Ben Rhodes, will compete for a championship at Phoenix Raceway.

A full four weeks between strong runs didn’t make much of a difference for Gilliland, who ran quite well at Talladega Superspeedway on Oct. 2 yet watched the win slip away in the final laps. Martinsville was a similar story, with the No. 38 out front for 133 of a scheduled 200 circuits, though his failure to win was less a product of back-and-forth superspeedway racing and was more at the hands of a fellow competitor.

Gilliland’s recorded 10 top-five and 15 top-10 finishes in 2021, grabbing a victory at Circuit of the Americas for his first of the year and Front Row Motorsports’ first truck win entirely. The crash relegated him to a 25th-place finish.

Things started out relatively calm. The most significant contact was some fender tag played between Creed and Nemechek, but as the race neared the halfway point, things started to ramp up.

An eight-truck frontstretch pileup on lap 89 was the first large incident, but the most notable came on lap 131, when Nemechek and Austin Wayne Self traded some paint on the backstretch: Nemechek made a move and dove below the No. 22 heading to turn 3, and Self appeared to turn dead left into the No. 4’s bumper.

Nemechek subsequently went sailing into the wall, totaling the Kyle Busch Motorsports truck and miring the five-win driver in 39th.

“He shouldn’t be out here,” Nemechek said of Self in his interview once he was released from the infield care center.

The No. 4 had a large cushion heading to Martinsville, one that dwindled to sub-double digits with the crash, but needed several factors to happen in order for Nemechek to miss the Championship 4. Not all of them did, so Nemechek ended up on the right side of things.

No, not Elvis Costello. This refers to one Crafton, who couldn’t have been more vocal on the radio as he rode the cutline for most of the race.

? "He doesn't even try to pass you. He just f*cking drives through you."@Matt_Crafton, who previously said he's going to "punch the mother f*cker right in the f*cking mouth" of @zanesmith77, is still unhappy. Team concurs with him.

? "Get this f*cking truck out of the f*cking way! Are you that stupid NASCAR? […] gonna make these races five f*cking hours."

? "Use your head that the good lord gave you and push the mother f*cker backwards!"

They gon need some soap ??

Creed immediately went over to Crafton’s truck after the race as well, as the pair seemed to have some sort of disagreement over an earlier incident not quite evident to viewers. The two talked it out for some time, leading to Creed saying that they’d likely talk about it further during the week.

Outside of Nemechek’s hard hit, a few other, smaller incidents impacted other postseason drivers’ races. Creed was one of at least eight trucks caught up in a pileup at the exit of turn 4 on lap 186, the No. 2 sandwiched between another truck and the wall.

Rhodes and Chandler Smith never really had any issues, but Crafton incurred a bit of contact throughout the day. Carson Hocevar beat Zane Smith to the line on a restart late in the race, after a solid run, and was black-flagged by NASCAR for doing so. As such, he completed a pass-through penalty but drove back up to 12th, coming up short of a win yet again.

After turning Gilliland, Friesen then dove into turn 1 and appeared to be trying to do the same to Zane Smith,

As for the winner, early in the race it appeared Zane Smith thought his truck was blowing up. Smoke was reportedly in the cockpit, but apparently cleared up relatively quickly.

Points Report: Nemechek, Crafton, Zane Smith and Rhodes all head to Phoenix knotted at 4,000 points apiece. The highest-finishing driver will claim the title; typically, the champion wins the final race across Cup and Xfinity competition. The trucks have bucked that trend the most, with just two champions (Brett Moffitt and Creed) winning the final race. And, for what it’s worth, Crafton won the 2019 crown without winning a race. Wins so far for the No. 88 crew this season? Zero.

was a valiant effort. gutted.

Not sure if we finished 4t/6th but none the less, I’m sure we passed the most trucks today

Many stripes & something I don’t like to do, but sometimes you have to stick up for yourself

Up Next: The Truck Series finishes off their season this Friday, Nov. 5 in the desert at Phoenix Raceway. Coverage will begin at 8 p.m. on Fox Sports 1.