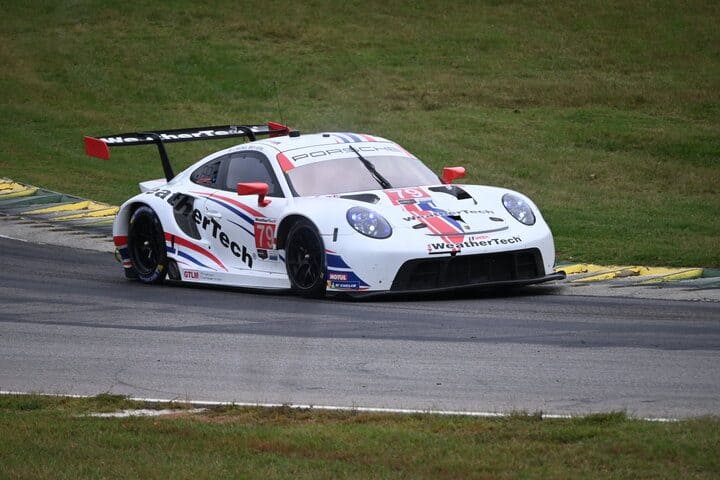 The opening session of the day started under gloomy skies at 8 a.m.  Estre put his Porsche at the top of the charts quickly.  The Corvettes were able to usurp his early quick times, but halfway through the session, Estre set a lap at 116.412 mph to lead the session.

In GT Daytona, it was Turner Motorsport’s Bill Auberlen that was fastest with a lap at 112.768 mph in his BMW M6 GT3.  Auberlen’s lap was two-sevenths of a second faster than the Lamborghini of GRT Grasser Racing Team’s Franck Perera.  The Heart of Racing Team’s Ross Gunn was third in his Aston Martin, followed by Vasser Sullivan’s Jack Hawksworth and Alegra Motorsports’ Daniel Morad.

The midday practice session was marked by intermittent raindrops.  While the track never got truly wet during the session, it did cause some problems.  Alegra Motorsports’ Michael de Quesada had an off-course excursion at the Oak Tree Turn during such a shower.  De Quesada managed to avoid hitting the tires and continued.  Officials put out the red and yellow striped flag to denote a slippery surface for the first 16 minutes of the session.  Despite this, there were still a couple of raindrops here and there for the rest of the session.

Estre managed to pick up the pace even more, topping the session with a lap at 116.742 mph.  This lap is not a track record as it is nearly a half-second off the pole time from last year.

Estre’s lap was more than a third of a second faster than Corvette Racing’s Tommy Milner.  Jordan Taylor was third quickest.

In GT Daytona, Hawksworth was quickest in his Lexus RCF GT3 with a lap at 112.751, a couple of hundredths of a second slower than Auberlen in the early-morning session.  Hawksworth’s lap was nine-hundredths of a second faster than Gunn.  Gunn’s teammate Alex Riberas was third in the No. 27 Aston Martin, followed by Zach Veach in the second Vasser Sullivan Lexus.  Paul Miller Racing’s Bryan Sellers rounded out the top five.

Qualifying for the Michelin GT Challenge at VIR is scheduled to get underway at 4:30 p.m. ET.  The session will be streamed live at both IMSA.com and NBC Sports’ TrackPass service on NBC Sports Gold.