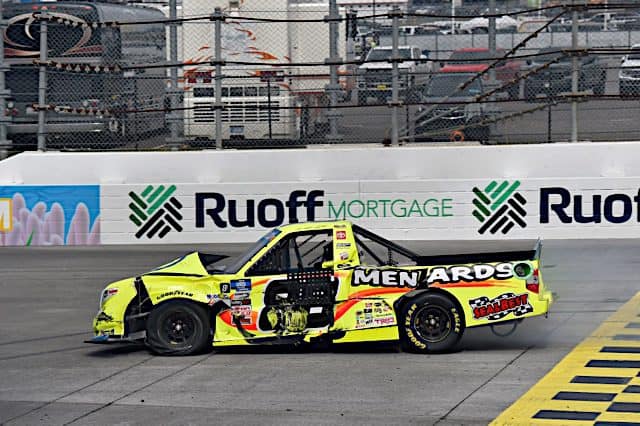 After Tate Fogleman’s victory Saturday (Oct. 2) at Talladega Superspeedway, the NASCAR Camping World Truck Series heads to Martinsville Speedway on the verge of its first playoff round with three non-postseason-eligible winners. Christian Eckes‘ triumph at Las Vegas Motor Speedway kicked off the Round of 8, leaving only Martinsville on Oct. 30 to decide the Championship 4.

Guess who won last year’s 200-lapper at Martinsville? Current non-playoff driver Grant Enfinger, confirmed last week to be in GMS Racing’s No. 23 for 2022 and 2023. Enfinger came oh-so-close a week later to a championship, falling short to Sheldon Creed, and found himself out of a full-time ride for the 2021 campaign.

However, October kicked off with the Talladega announcement of his return to GMS; Enfinger scored his first career win with them at that track, the victory coming way back in 2016 (the first year of the playoffs’ implementation in the series, where he was not a championship competitor at the time).

Enfinger has split time between ThorSport Racing and Codie Rohrbaugh‘s team in 2021, managing an impressive 11 top-10 finishes in 19 starts.

All of this is to emphasize how precarious the entire playoff situation is heading to the Paperclip.

Creed, solid all season long and sweeper of the first two postseason races, teeters on the cutoff brink just five points ahead of Stewart Friesen. John Hunter Nemechek, with five wins on the season and near-winner of Talladega, is 36 points ahead of fifth-place Friesen but is still in danger of elimination if an early incident ends his race.

However, Nemechek is one of only two playoff drivers with wins at the half-mile track, along with Matt Crafton. Ben Rhodes has finished second there twice in the past five races. Friesen has four top-10 finishes in seven starts, though never better than fifth, while Carson Hocevar, Zane Smith and Chandler Smith are all in must-win situations.

Last year, there were 10 cautions for incident during the 200-lap race, meaning 41% of the event was run under yellow (82 laps’ worth), and the average green-flag run sat at just under 10 circuits. A whopping six of those cautions were for multi-truck incidents, including a lap 14 crash that collected five trucks.

Everyone, from drivers on crumbling ground like Hocevar and Zane Smith to those higher up like Crafton and Creed, led laps — nine different leaders, to be exact. Even Rhodes was out front for one lap, 198, before teammate Enfinger passed him.

The trucks take on the Paperclip at 1 p.m. ET on Saturday, Oct. 30. Fall will have swept in and Halloween will be less than half a day away, so it should be a fun night. Appropriately scary for the four drivers on the outside looking in going into the event, but that might make the on-track sparks fly all the higher that afternoon.