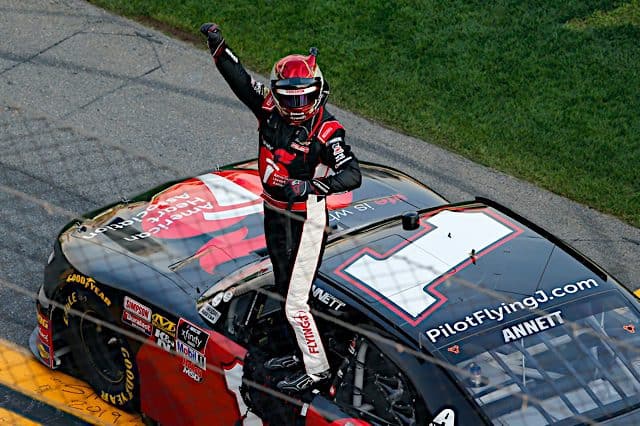 The conversation around pay drivers in NASCAR has not gone away in recent years. In fact, it’s probably gotten louder.

And it’s mostly negative when brought up. While a driver like Josh Berry has found success in 2021 on driver talent alone thanks to JR Motorsports being able to piece together a partial season in the NASCAR Xfinity Series for him and finding backing for him he might not otherwise have, the NASCAR landscape remains rife with racers who some claim have only gotten to the highest reaches of auto racing because of the funding they bring, not due to their intrinsic ability.

Michael Annett, who announced this week he’s retiring from full-time competition at the end of 2021, has sometimes been included in the latter category, depending on who you ask. He appeared on the NASCAR scene in 2008 and has run a full season in the Cup or Xfinity series every year since 2009, almost always sponsored by Pilot Travel Centers and its subsidiaries.

That’s not by accident; Annett’s late father Harrold was the longtime CEO of TMC Transportation, a trucking company that does business with Pilot/Flying J. It’s not, say, Paul Menard being sponsored by Menards or John Wes Townley having Zaxby’s backing, but it’s substantial nonetheless, and it’s led to a partnership that’s lasted over a decade, largely between the Cup and Xfinity divisions.

These days, drivers who come armed with funding somehow related to their family are plentiful, and Annett’s been one of its premier examples for years.

But that doesn’t mean Annett wasn’t a good driver. In fact, he wasn’t bad at all.

Toward the twilight of his full-time career, the online chatter regarding Menard sort of shifted. He went from a guy being there on daddy’s money to someone who rose to the top ranks of NASCAR in part because of those connections but who after a while had proven he belonged there and could even rattle off the occasional top finish. His 2011 Indianapolis 500 victory is, of course, the chief example of this, alongside a trio of Xfinity wins. But Menard could also be counted on for a potential Cup playoff berth, such as his 14th-place points finish in 2015, and his mid-2010s career also saw a 2014 with five top fives and 13 top 10s.

There are similarities with Annett’s trajectory. Like Menard in the mid-2000s, Annett kicked off his Xfinity career in the late ’00s with promise no matter the team for which he was competing, steadily improving to a strong 2012 in which he boasted six top fives, 17 top 10s and a fifth-place points finish.

Unlike Menard, Annett hit a bit of a detour, though. His career season in 2012 preceded a 2013 plagued by injury, and in 2014, he took a perhaps ill-advised leap to Cup — but where he’d been in fairly decent equipment in Xfinity, his Cup rides were on the lower end of the totem pole, and it showed. In three full-time seasons from 2014 to 2016, he never scored a top 10 and only earned an average finish better than 30th once, a 29.4 in his rookie season.

Let’s say Annett, armed with the Pilot funding to keep on trucking for lower-end teams like Tommy Baldwin Racing but not enough cash to land a top-tier ride, had nonetheless finished out his career in Cup. We probably wouldn’t be talking about him in this light. He generally kept his car clean in Cup, but he didn’t have occasional spurts of greatness like, say, Menard did (though to be fair, Menard was usually running for better teams). He might have passed as a driver with some potential in Xfinity but whose career had since hit a lull out of which he could not climb.

A funny thing happened in 2017, though. Annett hooked up with JRM, driving its No. 5 and later the No. 1. Not a bad pairing, right? Finally gave Annett a shot in championship-winning equipment and kept an elite car on the track at JRM. It always felt like a better move with the funding Annett had; sure, he was helping get an entry onto the track in Cup that might not have otherwise had full-season sponsorship, but it was only going to go so far in terms of making the organization a contender. At JRM, suddenly the Pilot money is flowing into a team that’s already challenging for wins as it is — and now Annett could become part of that tradition.

Not that things started off that well. The experiment seemed like a bit of a failure at first; after a debut season with just one top five, Annett’s 2018 was even more dismal, scoring three top 10s the entire year and missing the playoffs entirely. While, mind you, the same organization won the championship both years with William Byron and Tyler Reddick. Couldn’t call it an off year for JRM.

And then came Daytona International Speedway in 2019, the season opener. Annett finally snagged that elusive first NASCAR in, and from there the floodgates opened back up, with respective numbers on the year (one win, six top fives and 19 top 10s), followed by a four-top-five and 22-top-10 season in 2020. This year, he seemed in line to make yet another postseason before persistent injuries curtailed his playoff goals.

Injury aside, the last two years brought Annett back to the level he seemed at in the early 2010s: kind of your Paul-Menard-but-Xfinity type, always well funded but with the results to back it up enough that it wasn’t terribly irritating to see him back in a top ride every season. Annett’s never been one to tear up equipment, either. He was running at the finish in all but two races in 2019 and all but four in 2020, and the pair in 2019 were via wrecks at Daytona and Talladega Superspeedway, which is something you can barely hold against anyone.

He kept his cars clean, and at least on the Xfinity level, he wasn’t known as a dirty racer, hard to pass, a loose cannon, what have you. Some weeks he was just sort of there, another car in the field. But depending on the season, you might also see him battling for the lead or at least settling for a strong top 10.

To that end, let’s consider Annett’s decade-plus run in NASCAR’s national series an overall win. He may have never been the favorite, but he helped keep dozens of crew members employed from year to year (and again, without much body shop work to do most of the time), competed for a few championships and even got a win, something an always-growing list of certain former hot prospects can’t say they accomplished.

The wording on the retirement announcement seems to indicate this won’t be the last we’ll see of him, just as we continue to see Menard pop up on the entry list here and there. And if and when he does return for some one-offs, I have a good feeling the reaction will be largely positive.

Heck, maybe he has some final superspeedway wins still left in him.