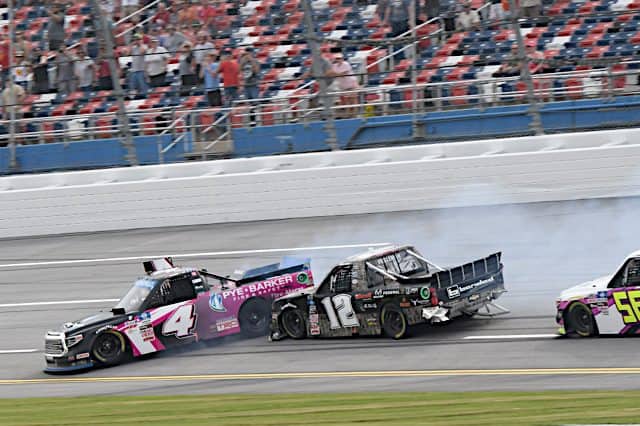 LINCOLN, Ala. – The box score in the future will tell you that Young’s Motorsports’ Tate Fogleman won the Camping World Truck Series Chevy Silverado 250 Saturday (Oct. 2) at Talladega Superspeedway. It is his first career victory in the series.

Despite the surprise winner, the race will likely be remembered for the sheer amount of wrecks and how many people were involved. Even Fogleman was not spared as he went hard into the inside wall exiting the tri-oval just after the finish.

The first multi-truck crash broke out on lap 58 when Todd Gilliland got in the back of Austin Hill on the backstretch. That turned Hill into Zane Smith and put both drivers into the outside wall.  The result was a complete mess entering turn 3.

“All of us were doing a little too much pushing,” Smith told Frontstretch.  “It’s a product of these places. You’re never really safe.”

Officially, 21 trucks were wrapped up in the schmozzle. Eight of those trucks were eliminated immediately. Tyler Ankrum and Jason White were unable to get back up to speed before the crash clock ran out, resulting in DNFs. Austin Wayne Self was able to continue after his contact, but a blown tire later caused an electrical fire that put him out.

Crash No. 2 came on lap 77 when Grant Enfinger made a move to block Sheldon Creed in turn 4. Creed got in the back of Enfinger and spun the Alabama native into Stewart Friesen. The resulting crash eliminated Enfinger, Friesen, Carson Hocevar, Hailie Deegan, Clay Greenfield and Lawless Alan.

Trouble strikes again as more #NASCARPlayoffs drivers are collected in this caution at @TALLADEGA. pic.twitter.com/TRh57vfcdG

“It was just Talladega racing,” Enfinger told Frontstretch afterwards. “It’s just unfortunate. Felt like we had a chance to get to the lead. Made a second move…to try to get control of the race and put ourselves in position to win. Knew the outside line was coming, so I went up there to get a push from Sheldon [Creed] in [the middle of my bumper]. I got in front of him and he got me in the left rear.”

Then came the run to the finish. Bret Holmes pushed Ben Rhodes to the front, then nearly turned him, costing the duo momentum. Matt Crafton got in the back of Holmes and turned him into Danny Bohn. That triggered a crash in turn 3 involving Holmes, Crafton, Rhodes, Creed and Codie Rohrbaugh.

That left Gilliland in the lead with John Hunter Nemechek and Fogleman behind. Nemechek dispatched Gilliland, then got hooked by Fogleman coming to the line. Fogleman won the race, but he paid the price as he had contact right at the start-finish line with second-place finisher Tyler Hill. That resulted in Fogleman going hard into the inside wall. His winner’s interview took place at the Infield Care Center.

Playoff-wise, three of the eight playoff drivers (Friesen, Zane Smith and Hocevar) failed to finish. Three more (Creed, Rhodes and Crafton) were in the turn 3 crash on the final lap. Nemechek got dumped coming to the finish, but still finished fourth. Chandler Smith‘s truck was beaten up, but he still finished 18th.

What does that mean for the points? Nemechek retook the points lead from Rhodes. Just finishing under his power benefitted Chandler Smith as he moved up to sixth.  Fogleman winning means that no one is locked into the Championship 4 entering Martinsville.

Of the 40 trucks that started Saturday’s race, 34 were involved in crashes, including all eight playoff contenders.  21 trucks failed to finish.