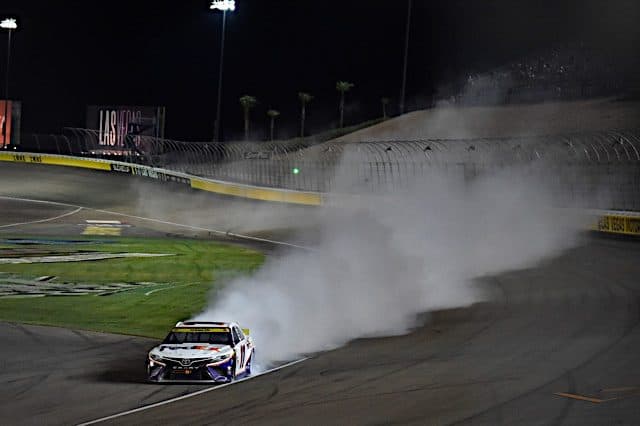 The mayhem of Bristol in mid-September was followed by a very calm, near-serene race at Las Vegas Motor Speedway, where Denny Hamlin won stage two and cruised to the race win ahead of Chase Elliott, securing the No. 11 a spot in the Round of 8.

With his second win of the season, Hamlin can now relax before the series heads to Talladega Superspeedway and the Charlotte Motor Speedway ROVAL. He also tied Buck Baker for 17th all-time with 46 career victories.

Hamlin led the most laps en route to his first career win in Sin City.

“Just so happy,” Hamlin said after the race. “All Toyota teams, just Joe Gibbs Racing just gives us great racecars. That’s what I’m so proud of, just to drive for those guys and can’t thank them enough for everything they do. Vegas, it feels so good to win at Vegas.

“Last couple times, I’ve been so close, just didn’t have the right brakes. They dialed the car in great, and great to hold those guys off.”

Larson rolled off on the pole, but outside polesitter Blaney led the opening lap before Hamlin took control. Hamlin battled with Joe Gibbs Racing teammate Kyle Busch after pit stops under a competition caution, but both of them dropped back as Larson climbed to the front.

Larson set sail once he got there and won stage one. Christopher Bell spent a little extra time on pit road during the stage to fix damage after contact during the round of stops.

The No. 20 crew for @CBellRacing makes repairs to his car after pit road contact at @LVMotorSpeedway.#NASCARPlayoffs | #SouthPoint400 pic.twitter.com/ZLM0D7Oq9W

Once stage two got underway, a hard crash from Joey Gase put things back under yellow-flag conditions. Gase lost a wheel in turn 2 and spun, slamming the outside wall.

Distant replay footage appeared to show the No. 15 car on top of the outside retaining wall before it landed and came to a stop on the apron.

What an impact for Joey Gase.

No good replay angles, but it looks like the WHOLE CAR ended up on top of the wall.#NASCAR #SouthPoint400 pic.twitter.com/5GErufuAvX

Gase was moving and talking with medical personnel at the crash scene, but NASCAR later announced he had been taken to a local hospital for further evaluation.

Hamlin went on to win the second stage, though, as the varied pit strategies played out. Larson was mired back below the top 10 when the final stage got underway, while JGR ran 1-2-3 up front. Also running well was Reddick, who at one point nearly challenged Hamlin for the lead.

A flat tire brings #NASCARPlayoffs driver @WilliamByron back into the pits late into the #SouthPoint400! pic.twitter.com/nCeHhnUueb

Elliott was the Hendrick car that came to life late as Larson struggled to cut through the field, contending with Hamlin late and closing in as the laps waned. He couldn’t get within more than three-tenths of a second, though, and could only watch as Hamlin won his second race of 2021 and locked himself into the Round of 8 ahead of the unpredictable Talladega.

“I’m so happy I don’t have to worry about the next two weeks,” Hamlin said. “But I’m a professional, so I’m gonna work just as hard every week to win.”

"So happy not to worry about the next two weeks." –@dennyhamlin

After his win tonight at @LVMotorSpeedway, the No. 11 team is looking for more ?'s the next few weeks! pic.twitter.com/e25j5M7xVK

In post-race inspection, Harvick’s No. 4 had two lug nuts not safe and secure, so crew chief Rodney Childers is suspended for next week’s race at Talladega Superspeedway.

That means crew chief Rodney Childers will be suspended for the race at @TALLADEGA. #NASCAR pic.twitter.com/ETfg3iODsP

The Cup Series heads back east next week for a date with Talladega on Sunday, Oct. 3. The YellaWood 500 is set for 2 p.m. with coverage on NBC’s flagship station.

All we do is win!