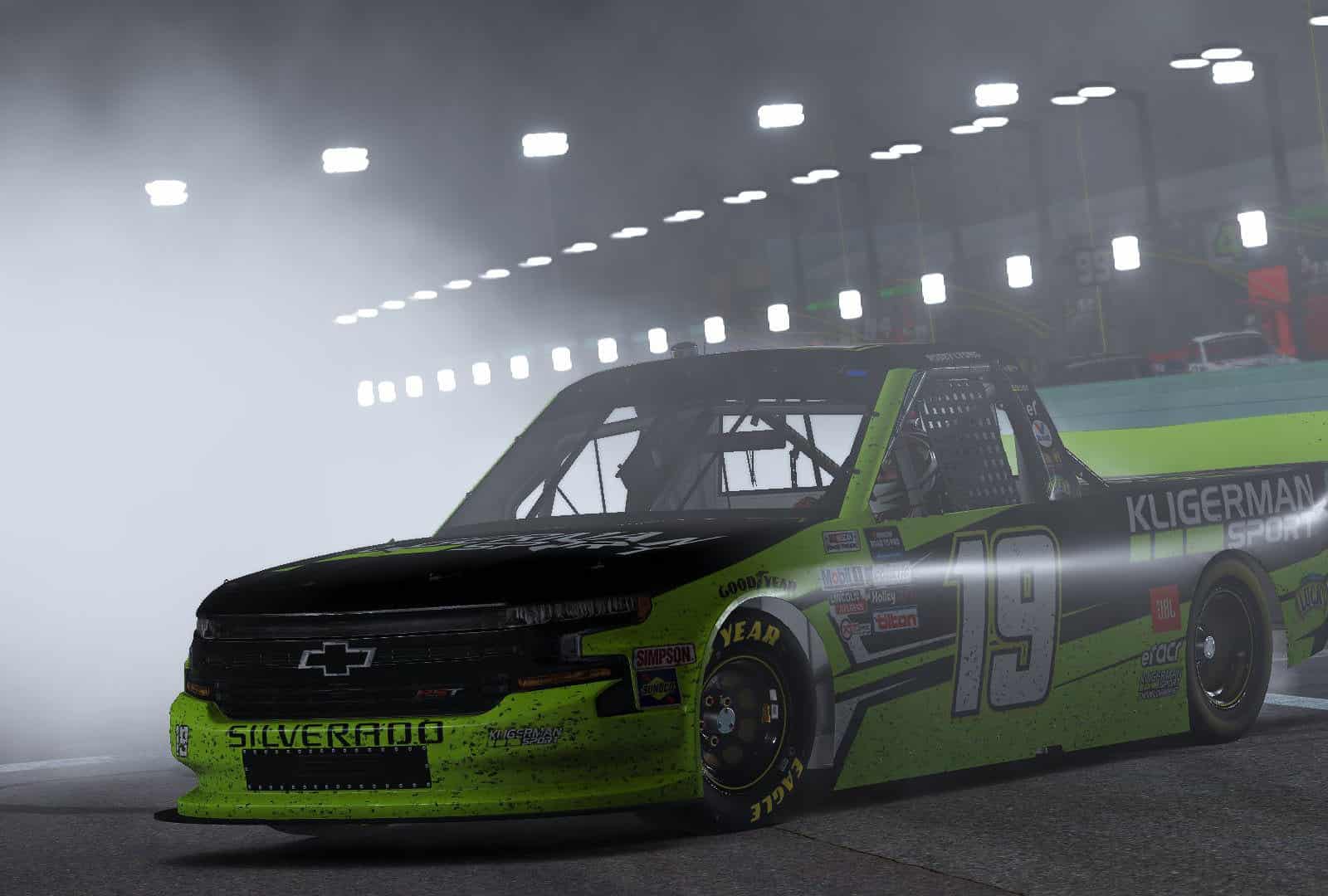 Since the last edition of the iRacing Weekly Roundup, two of our community leagues have decided upon a champion. Three champions, actually, if we’re talking about the inaugural eRacr.gg Roval Racing Series and its three divisions.

This roundup has that final eRacr showdown at the Homestead-Miami Speedway Road Course as well as the final two races of Monday Night Racing Season 3. We’ve also got the end of the regular season for 100% Cup Series, the start of the playoffs for FTF Cup Series at Darlington, and the fifth round of the eNASCAR Road to Pro iRacing Series at Texas.

The final race of the season took place at Homestead-Miami Speedway’s B Road Course on its final Saturday night. With the Cup Class A championship decided a week prior, won by Matt Danson, the focus coming in was the decisions between the Xfinity Series Class B and the Ballistipax Class C Trucks.

For the trucks, when the green flag flew and Brandon Paunetto wasn’t able to start, David Grantham took the championship after completing one lap. Class B would still technically be contested through the race, but enough drivers dropped out for Matt Taylor to take the title during the race.

The race itself saw three winners that weren’t the three champions. A 90-minute contest as opposed to the normal hour, Class A went to Vicente Salas, Cade McKee won Class B, and Ballistipax Class C went to Hunter Reeve.

The folks at eRacr.gg plan to bring the series back in the future with more planning and people wanting to participate. For now, the return of the series is unknown.

Stay tuned for more information over at eRacr.gg.

The second-to-last race of the regular season took the 100% drivers to Michigan. Dustin Hall took the pole position, but it was Jon Dulaney taking the first stage victory. Bryson Hixenbaugh led the second most laps at 56, but he wound up finishing a lap down.

The most laps led went to Adam Benefiel, who not only went on to take the second stage, but also the victory, a series-high eighth win.

8 wins in 2021! @Adam_Benefiel83 lights up @MISpeedway rolling strong into the playoffs!!! Is he the championship favorite?#iracing | #simracing | #enascar | #nascar |#Michigan pic.twitter.com/pMxh3mbDKs

With the NASCAR Cup Series on Saturday night, the 100% Cup Series took to the track a night early to finish the Regular Season on a Friday. Jon Dulaney took the Daytona pole position. Cam Stone took the lead and was unrelenting, leading 103 of the 160 laps. Stone won both stages and took the victory.

Nothing like the smell of victory lane ion #SaturdayMorning . ?
Congrats to Cam Stone and @apexracing100 on another win at Daytona!!#iracing | #racing | #enascar | #nascar | #simracing pic.twitter.com/NZmc63KwdP

The playoffs begin with 16 drivers racing for 12 spots in the next three races. Dulaney holds the top seed with 2067 points. Benefiel is 12 points behind in second and Hixenbaugh is third, 19 points behind the leader.

The first race of the 2021 playoffs saw a fairly green race at Darlington Raceway, only marred by three cautions during the 227 lap contest. Brian Mercurio took the pole position, but Blake Reynolds and Kevin King would be the dominant forces in virtual South Carolina.

King won the first stage but Reynolds took second. Reynolds led the majority of the laps, 161, and was able to go on and win his third race in a row, in a substitute role for Jake Poulin’s No. 00 JR Motorsports JR Chevrolet.

Reynolds is the first of the playoff drivers to advance to the Round of 12! pic.twitter.com/R07rUJD8KQ

Reynolds locks into the Round of 12 with the victory. Three of the 16 playoff drivers were unable to make the start of the race, including Jake Poulin, Alex Kolonics and Michael Guest. Those three, along with Kevin McAdams who was limited to driving without a wheel, currently sit in the bottom of the standings entering Richmond.

The penultimate race of the third season, for Rajah Caruth, it was do or die. Caruth was at the bottom of the standings after a miscue at Michigan in the 1987 NASCAR Stock Cars. DJ Cummings held the final spot, but if Caruth could win, he would be knocked out.

Even a late race caution couldn’t deter Caruth, as we went on to win to secure his place in the Championship 4. Garrett Smithley, Adam Cabot and Robby Lyons were the other three to advance. Cummings, along with David Schildhouse and Max Kennon, were eliminated.

Rajah Caruth WINS and ADVANCES to the #Championship4 at @HomesteadMiami https://t.co/X63IOKF25t

Finally, the finale. Four drivers were poised to take their first Monday Night Racing championship after a long road to make it to the battle. For most of the race, it seemed like Rajah Caruth, Adam Cabot and Garrett Smithley. There were some challenges in the form of Anthony Alfredo and Ryan Vargas to contend with at the top, but those three seemed to have the speed to win a title.

Meanwhile, Robby Lyons was mired around the midpack. Whether it was a strategy or the inability to pass, it looked as though he wouldn’t be in the conversation for the title.

A late set of cautions changed everything. Lyons stayed out on only a few lap older tires. A slew of cautions followed, and the race would restart in triple eNASCAR Overtime. By that point, the tires had cycled multiple times, handing an advantage of clean air to Lyons. Caruth tried all he could to get back to the top, but Lyons and Smithley kept him at bay.

Season 4 of Monday Night Racing is set to begin in November with a winter season. There are no current talks about having the Esports Racing League in its place until then.

ROAD TO PRO QUALIFYING SERIES (ROUND 2)

The fifth round of the eNASCAR Road to Pro iRacing Series took place at Texas Motor Speedway last week. For the first split, the battle raged on between the top drivers in the series so far. Kollin Keister, winner two weeks ago, took the pole position. Keister led the first 40 laps, but during pit stops, it was Darik Bourdeau and Parker Retzlaff swapping the top spot

With a final pit stop with 18 laps to go, Keister returned to the lead. Bourdeau fought hard to take it back, but Keister held on to win his second in a row.

WHAT A FINISH IN RACE 1!@KollinKeister WORKS HIS WAY BACK AROUND @Dard2121 AND WINS HIS 2ND RACE IN A ROW!

The second split saw comers and goers, as well as the perfect strategy call at the end of the race. Donovan Strauss started on the pole position, but Cody Byus was poised more than ever to finally grab himself a Round 2 qualifying series victory. Byus looked unmatched, but pit stops would be his downfall.

Around midrace, after the one and only caution, Oumar Diallo was able to leap in front, which caused Byus to lose time in pulling away from the field like he was able to do in the previous run. Jordy Lopez Jr undercut Byus by a lap or two in the pits, and with tire falloff extreme, Lopez came out on top.

Seth DeMerchant, a teammate to Lopez, was able to wedge himself in-between the two, and Lopez went on to win his first race of the second round.

First time for everything ?‍♂️ pic.twitter.com/QYxbAB7sAX

With only two races to go, Strauss, Keister, Lopez Jr and Briar LaPradd sit in the Top 4 and look to be set to advance a week early. Byus, Bourdeau and Retzlaff are right behind and could lock in as well.

Check out the broadcasts over at Podium Esports and Podium 2.

100% Cup Series will head to Darlington Raceway on Saturday night at 8:30 p.m. ET. The replay will be available on 3 Wide TV.

Both eRacr.gg’s Roval Racing Series and Monday Night Racing are off until their next seasons begin.