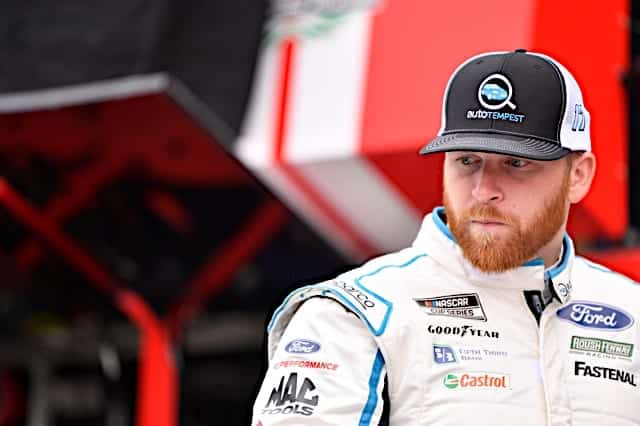 Since the start of summer, Chris Buescher has gone from looking like a postseason lock to needing a miracle just to make it in the playoffs.

Following a finish of eighth in the Coca-Cola 600 Memorial Day Weekend, Buescher was the last driver above the playoff cutline with a 55-point cushion.

Since then? It’s been a summer slide. Buescher has zero top 10s since that race, while he had four prior to it. He now sits 146 points below the playoff cutline.

The slide places him into a self-admitted “must-win situation,” he told media members prior to the Verizon 200 at the Indianapolis Motor Speedway road course on Sunday (Aug. 15).

Additionally, his Roush Fenway Racing teammate Ryan Newman has struggled mightily this year, currently 26th in the points. Mired in arguably a career-worst year with his lowest-ever average finishing position, Newman bluntly stated how fortune hasn’t been on his side.

“I don’t even know how to spell luck anymore,” Newman said this past weekend. “It’s not been good. You’re a product of your own environment and what you can make for luck. There are peaks and valleys, and we definitely seem to be in a valley.”

It’s not an ideal situation for the Roush drivers, but it isn’t for a lack of speed, according to Buescher.

“We had been strong this year, and we have to look at a couple of different things,” Buescher said. “One, without all the one-time winners, we’d be in a pretty good spot to make the playoffs right now. That’s a poor excuse. Ultimately, we need to get a win to do that as well. We’ve had a solid points year, we’ve had good speed at a lot of different racetracks. That’s one part of it.

“And then [we had] just a handful of bad luck starting at Nashville [Superspeedway], getting caught up in someone else’s failure. It took away our pretty massive cushion that we had at that point. We’ve had good speed, we’ve had good showings at a lot of these racetracks. We could definitely race into the playoffs, but it hasn’t quite gone our way until now. We need a win at this point so we can get back ahead of the drivers that have wins that we’ve been ahead of all year.”

Buescher has been faster than playoff-bound Michael McDowell and Aric Almirola. He’s scored more points than both drivers, and he’s only 41 points behind playoff-bound Christopher Bell. Yet the playoff format has those three locked in due to winning races, while the Texan will need to grab his second career NASCAR Cup Series win in order to make the playoffs.

What will it take for Buescher to drive his No. 17 Ford into victory lane?

“I wish I knew; we’d have it by now,” he quipped. “We’re in a little less risk at this point. We can be a little more aggressive, so maybe that takes us there. Ultimately, it’s what we’ve been doing, we just need to stay after it.”

Michigan, in the Ford Motor Company’s backyard, is an important race for team owner Jack Roush, as his stable has won 13 times there. But the most recent win there was in the June 2013 race with Greg Biffle, which proved to be Biffle’s last in Cup.

Buescher won an ARCA Menards Series race at Michigan in 2012. As for his Cup Series record there, he has one top 10, a sixth-place finish in its second 2017 race, in 10 starts.

“Michigan is one we’re going to be looking good at,” he said. “Jack [Roush] always has it circled. It’s big for Ford, it’s pretty important for us. Trying to figure out how to make that one a solid one. We really don’t have any racetracks this year that’ll help us prepare for that one.”

Daytona will host the regular season finale for the second straight year. Buescher has three top-fives there, with a best finish of third in the 2020 season opener, as well as five top-10s in his 11 starts there. After being involved in a crash and ending up 31st in the 2021 season opener, Buescher is hopeful for a better finish but is also cognizant of the chaos that can transpire at the 2.5-mile superspeedway.

“Daytona, we won’t know how it plays out,” he said. “Hopefully, this one goes smoother so we can find ourselves in a good spot by the end of it. Hopefully, win a race to get an upset to make the playoffs.”

One point of consistency Buescher has had on the season is on road courses, finishing in the top 20 in all six so far this year. Buescher stated that he is a fan of road course racing, but the current amount currently on the Cup schedule is the maximum amount it should be in his opinion.

“I’m a road course fan, so I enjoy doing it four to five times a year, but this is enough, maybe even a little on the high side for my liking,” he said. “I feel like the majority of drivers would say the same thing. I know we have a handful of drivers that like road courses and would like to run more. I’m a short track racer by trade. That’s what I grew up doing, and I want to do more of it. I would prefer more short tracks and no more road courses. I can handle this amount; it’s on the top end. I don’t want to keep adding a bunch.”

NASCAR changed its Cup race at Indianapolis Motor Speedway from the oval to the road course for this year. But Buescher would prefer to race at the nearby 0.686-mile short track of Lucas Oil Raceway.

Looking ahead to next year, Buescher confirmed to Frontstretch that he will return to pilot the No. 17 Ford. He’ll have a new teammate and new boss, as Brad Keselowski joins the organization as a driver and part-owner.

While Buescher has spoken to Keselowski since the announcement, the two are racing with different goals right now. Keselowski has a win this season and will chase his second Cup title this fall. Buescher, meanwhile, is chasing that win to make the playoffs.

“Right now, we’re excited about it as we get closer to the end of our season and the offseason,” he told Frontstretch. “For the time being, we right now are competitors and we’re at competing teams. So it’s a little bit of a gray area. We’ve had some communication, and I’m really excited about it.

“I think it’s going to be a lot of fun to get to know him better through the offseason, to see what direction he has in mind to try to help us go. We’ll be looking forward to it. But right now, he’s in the middle of his season and we’re chasing the playoffs. So we’re all kind of head down, straight ahead to get our own stuff together at the moment.”

Really excited about the energy and championship mindset that @keselowski will bring to @roushfenway.

He and Jack are alike in that they're very passionate about representing our partners and Ford in the best way. Look forward to seeing where his knowledge can take our company! pic.twitter.com/xMW9gGCE6R

In spite of the Roush struggles, the team fortunes can be changed with a win by either driver in these last two regular season races.

“You can launch either car into the playoffs if you win a race,” Newman said.