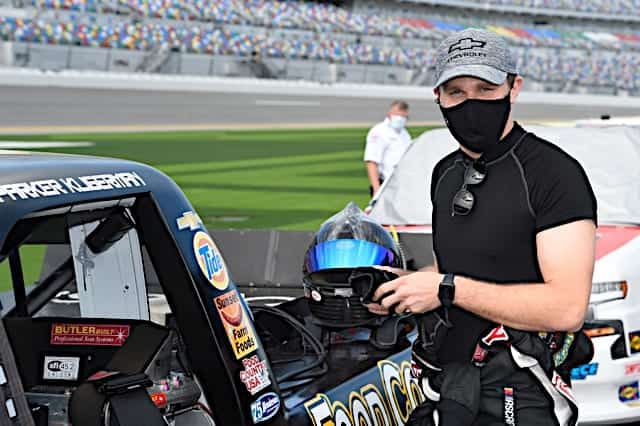 Before he could even appreciate his top-five finish in the United Rentals 176 at Watkins Glen International on Saturday afternoon (Aug. 7), Parker Kligerman emerged on pit road with a NBC polo and headset, chatting with Justin Allgaier before heading off to his other job.

Allgaier was curious about Kligerman’s tweet, advertising $1 hoodies through his sponsor, Fast Checkout.

“I don’t know if there’s a limit but I’m pretty sure we might have shut the site down again, so let’s see,” Kligerman said while walking down pit road to get ready for the Xfinity Series race broadcast.

Top 5 in the @NASCAR_Trucks race, headset on for @NASCARonNBC right after. @pkligerman is a Swiss Army knife. Not a bead of sweat on him either. pic.twitter.com/X7tS1KTwFf

The fifth-place finish for Kligerman was his first this season and 18th of his Camping World Truck Series career. It’s also his fourth top-five result for Henderson Motorsports, who he praised following the season-best outing.

“We started dead last and drove all the way up to finish fifth,” he said. “You know, Chris Carrier is a one-man band. We have one employee, and we can go out there and finish top five against some of the best in the whole deal. It’s pretty awesome.”

Kligerman was happy the race was called 10 laps early due to weather, partly due to their finish being solidified and partly so he could go and do his next job without any interference.

“I basically texted all the (NBC) producers and said, ‘can they call it now?'” he joked. “Please, I have to go change. I’m a little wore out. So I was like, ‘man, I’ll take fifth. I got us the $1 hoodies. I did my job.’ Great finish for us, pretty clean truck. We’ll live to fight another day. I would’ve loved to try and get to the lead at some point. But I don’t know if I would have made the passes there at the end. The No. 16 (Austin Hill) was pretty stout. And it was hard to pass at times.”

He also noticeably looked like he hadn’t just raced a truck in upstate New York heat, with not a single bead of sweat on him — despite conversing prior with Sheldon Creed and Ryan Truex about how hot the cockpit was.

But the result wasn’t a shock to him, as he explained that the No. 75 team had been solid all season long and had top-five speed before. At Circuit of the Americas earlier this season, they eventually finished 13th after running inside the top 10 and scored top-10 finishes on the Bristol Dirt and at Las Vegas.

“I think we’re a top five truck (on road courses),” he said. “(Crew chief) Chris Carrier and Henderson Motorsports, they do an awesome job. And thanks to Fast Checkout for coming on board. It’s been incredible. The truck looks awesome. I love bringing a fast-growing tech startup into the sport and I’m just on cloud nine with everything going on. I think it’s gonna be a really cool next 13 months, 14 months.”

Still on the docket for this season are Darlington, Talladega, Bristol and Martinsville for Kligerman. He’s been trying to line up a deal for the Xfinity Series at both Indianapolis and COTA, but nothing has come together yet.

That isn’t bringing him down, though.

“I would love to run some more races this year,” he said. “I haven’t run in the Xfinity Series since 2016. I’ve been trying, I really wanted to do the Indy road course. I want to do this more. I want to race way more often next year.”