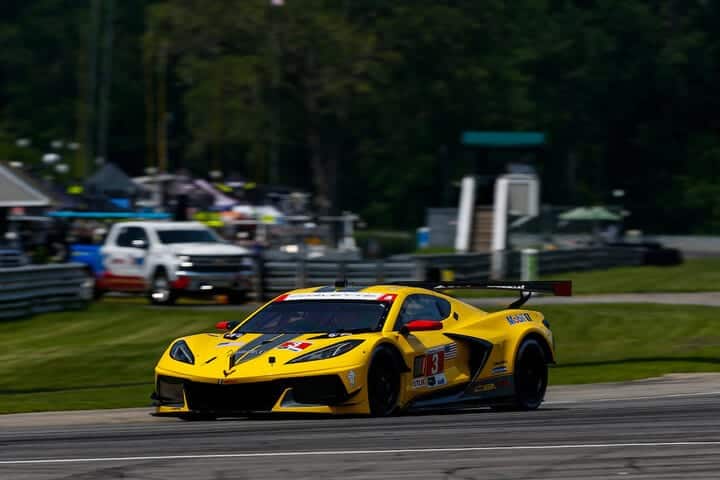 The opening practice session of the day started out with news that Alegra Motorsports had withdrawn their No. 28 Mercedes from this weekend’s action.  The team has not officially given a reason for the withdrawal.  Alegra’s withdrawal means that only 16 teams will do battle in Saturday’s Northeast Grand Prix.

Much like in Michelin Pilot Challenge earlier in the morning, teams went out on track as quickly as they could.  Garcia and Corvette Racing teammate Nick Tandy traded quick times multiple times in the first 15 minutes.  Garcia was then able to set the quick time on his 16th lap of the session.

Garcia’s lap was four-hundredths of a second faster than Tandy.  WeatherTech Racing’s Mathieu Jaminet was a third of a second back in third.

GT Daytona saw a number of teams put themselves at the top of the charts during the one-hour session.  Turner Motorsport was up there.  So was The Heart of Racing and PFAFF Motorsports.

However, when the session ended, it was GRT Grasser Racing Team’s Franck Perera that was fastest with a lap at 101.076 mph.  Perera’s lap was three-hundredths of a second faster than Wright Motorsports’ Patrick Long.  The Heart of Racing’s Ross Gunn was third in his Aston Martin, followed by Vasser Sullivan’s Jack Hawksworth.  The Porsche of PFAFF Motorsports’ Laurens Vanthoor was fifth.

Turner Motorsport’s efforts were curtailed during the session with a broken suspension upright.  That ultimately cost the team the entire second half of the session.

The second practice of the day opened under threatening skies.  It was dry at the beginning and the amateur GT Daytona drivers ventured out on track.  Just as the 15 minute mark was reached, allowing for GT Le Mans teams to venture onto the track, it began to rain.

This was not just regular rain.  This was a thunderstorm cell.  Soon after, lightning was spotted within eight miles of the track.  That meant that the red flag was displayed and a full stop down was instituted.

When the red flag was lifted, only 20 minutes remained in the session.  In the GT Le Mans class, essentially no representative times had been set prior to the rain.

When the green came back out, the track was still wet and cars were throwing up spray.  However, the track quickly dried, allowing for quick times on slicks to be set.  The three GT Le Mans teams traded fastest laps until Tommy Milner set a lap at 104.127 mph to top the session.  Milner’s lap was nearly a third of a second faster than teammate Jordan Taylor.

In GT Daytona, the first 30 minutes of the practice were restricted to silver and/or bronze-rated drivers.  As a result, they got some time on-track in the dry before the rains came.

Since the skies were foreboding, it was a land rush to get out on track and get some time in before the rains came.  PFAFF Motorsports’ Zacharie Robichon turned in the fastest GT Daytona lap of the day at 101.306 mph nine minutes into the session.

Qualifying for the Northeast Grand Prix is scheduled for 5:10 p.m. ET Friday.  The session will be streamed live at IMSA.com and on NBC Sports’ TrackPass service.