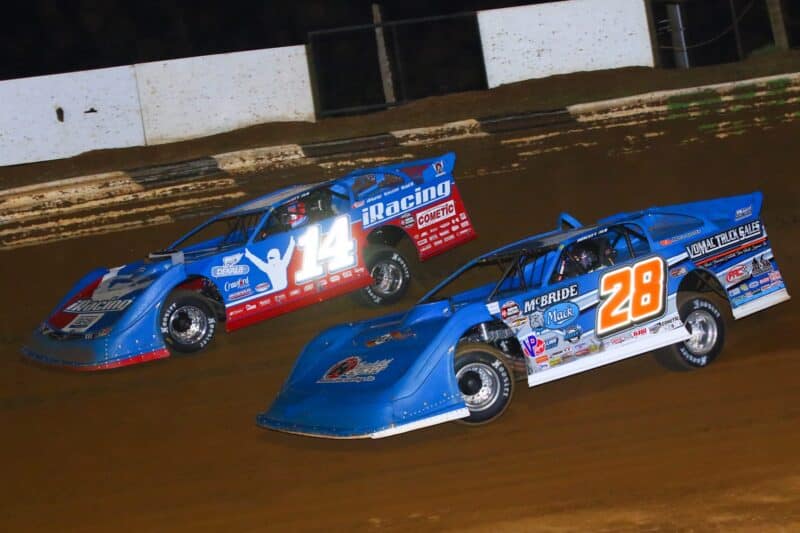 Bobby Pierce is leading the Hell Tour late model points for a reason, and that experience level was directly responsible for his scoring tour win number seven Thursday night at Macon. Throwing aggressive sliders early to make up positions on track, Pierce inherited the lead under yellow on lap 24 when leader and defending series champion Brian Shirley came up gimp with a flat right-rear tire.

That left Pierce to benefit from a Macon racetrack that took rubber and made passing near impossible on track. Though Ryan Unzicker got close to Pierce in lapped traffic on lap 40 and again near lap 68, the No. 32 was never seriously challenged for the win, even after a lap 98 red flag when Tanner English and Dean Carpenter tangled in turn 2.

Spotlight: World of Outlaws Late Model Series Northern Swing
Where: Jackson Motorplex – Jackson, Minn. (streamed on DirtVision)
Why We Chose It: At $10,000-to-win, one of Friday’s highest-paying dirt races.

Though polesitter Cade Dillard checked out in the early laps of Friday’s feature, it became obvious early that Frank Heckenast Jr. had a car built for the long run. Dillard blunted Heckenast’s first challenge for the lead after getting bailed out by a lap 17 yellow flag, but disaster struck for the Louisiana-driver 13 laps short of the finish when the entire right-rear wheel on his late model broke off the car in turn 2, handing Hackenast a lead that he would never relinquish.

It's one heck of a birthday present for @FrankJr99 picking up the win at @jacksonmotorplx. pic.twitter.com/ZhSIop9qoy

Heckenast’s win, his first on the WoO Late Model tour since 2015, came on his birthday.

Spotlight: World of Outlaws Late Model Series Northern Swing
Where: Jackson Motorplex – Jackson, Minn. (streamed on DirtVision)
Why We Chose It: The only $20,000-to-win race on Saturday night after rainouts for the Lucas Oil Dirt Late Models at Smoky Mountain and the USAC sprint cars at Knoxville.

It didn’t take long for Dennis Erb Jr. to assert control of the field Saturday night at Jackson, but the win took forever to get, as the field caught yellow fever inside the final 10 laps. Five yellow flags between laps 42 and 47 of the 50-lap event gave the field ample opportunity to challenge Erb, but both Brandan Sheppard and Heckenast Jr. proved unable to get around the No. 28 for the $20,000 win.

The win was the second of the tour season for Erb.

That was followed up by Spencer Bayston, a driver who after serving as a super-sub of sorts on the sprint car circuit got a surprising promotion to a full-time ride after Sam McGhee’s No. 11 team dumped Ian Madsen despite sitting second in ASCoC points. Bayston not only validated the team ownership by winning the Lou Blaney Memorial at Sharon Speedway on Saturday, he did with a bold, aggressive move for the lead on George Hobaugh that was Blaney-caliber.

In winning Friday night’s Hell Tour feature at Farmer City on Friday night, Shannon Babb became only the second driver ever to score 100 victories on the tour, joining recently retired Bobby Moyer on that list.

Jessica Friesen not only won Saturday’s modified feature at Fonda Speedway Saturday night, she did it besting husband Stewart Friesen. That’s all the more impressive considering she’s only the second driver to beat Stewart at Fonda in 2021. In 10 races.

Congratulations to @jz_friesen on the win tonight at Fonda!! Incredible job!!! pic.twitter.com/NH4z0f2ZMX

Nick Hoffman set a milestone of his own, as his 12th win on the Hell Tour in a DIRTcar modified marked his 50th career tour victory, again a race that he led flag to flag. Having said that, while to the victors go the spoils…

It really rubbed me the wrong way to see the same Hoffman sit out Thursday’s race at Macon because he historically doesn’t run well at the tight bullring and didn’t want to risk his car. Yes, building a points lead by winning 11 of 12 races on a tour means a driver has privileges to take a night off. But Hoffman spending the evening tweeting about how the crew at Macon should have worked the track, then changing tune calling the race the best event he ever saw on a rubbered track at the mid-race, then deeming the event uneventful by race’s end had me siding with Thursday’s winner Mike Harrison, who in victory lane stated he wished Hoffman had been on the track for his win so they could “end the bulls***.”

Dillard lost Friday night’s late model feature at Jackson in dramatic fashion, as rather than suffering a flat the No. 97 fell victim to catastrophic wheel failure while leading inside of 15 laps to go.

Both Dave Blaney and Hobaugh fell victim to clipping infield tires at Sharon Speedway Saturday night, but Hobaugh definitely got the worst end of the deal; contact with the infield tire in turn 1 literally broke the front wheels off his sprint car while he was running second.

It was damned impressive to see David Gravel composed enough to get his crew briefed on his damaged car after flipping early in Saturday’s World of Outlaws feature at Wilmot Raceway, and that feedback proved critical to the car being repaired and returned to the race in under four minutes.

Gravel quickly climbs out of the car and sprints to his crew to relay information as they want to try and fix it in the work area. pic.twitter.com/d5Ozqq2JNS

Problem is, Gravel would flip again 30 laps later in the same feature.

The worst place to be at Port Royal Speedway while driving a super late model Saturday night was in a podium position. Lap 13 saw then runner-up Jason Covert come up limp and bring out the yellow when he was unable to turn his car off the track to the pits in turn 4. A debris caution on lap 21 brought about a restart that saw leader Rick Eckert break immediately, dropping to the infield after leading the opening 20 laps of the feature. Lastly, Austin Berry slowed to a halt in turn 4 two laps short of the finish while running third.

The entire pro modified field at Macon on Thursday night put on perhaps the greatest travesty of a dirt race in 2021. The caution flag flew seven times before the field completed the first lap.

When the first lap was finally run, the crowd went literally wild, only to see lap 2 fall under the yellow for another spin. Race control’s response? “That was a heck of a lap.” And yes, it was sarcastic.

The Corn Belt Nationals at Knoxville were rained out Saturday night. Whether it was enough to wash the slime of Friday night’s catruckstrophe of a NASCAR race off the famed venue, I’ll leave up to those that actually watched it, because damn if the Twitter record wasn’t toxic.

Of course, the dirt racing community did see this disaster coming…

Flo Racing does a ton of things right and remains without a doubt the best value in streaming when it comes to dirt racing. Having said that, it KILLS me that their social media accounts can’t be counted on for same-day video replay of the many races they broadcast. That the daring pass Bayston used to win Saturday’s ASCoC feature at the Sharon Speedway isn’t available right after the checkered flag flew is a tremendous missed marketing opportunity for both service and series alike. Same thing for DirtVision failing to post the replay of Dillard’s dramatic spin from the lead at Jackson on Friday night.

There was an irony to hear the PA announcer at the Smoky Mountain Speedway in Tennessee encouraging all fans, but “especially the fans in the aluminum grandstands” to leave said stands for their own safety due to lightning in the area. I didn’t expect to hear an advised appeal for public safety to come from a track that in March packed their stands with maskless fans while praying for relief from the COVID pandemic during the invocation.

If there’s one positive to be taken from Gravel’s two tip-overs Saturday night at Wilmot, maybe it will be the team using up its stock of sprint car wings that still have “The Showdown at Huset’s Speedway June 20-26” logos on them. Of course, DirtVision may or may not have run ads for that same event during the Hell Tour earlier this week… who says the racing community clings to the past?

Sharon Speedway seems to have it out for NOS-sponsored sprint cars this season. Rewind back to Blaney’s WoO win earlier in the spring, and it came after Sheldon Haudenschild hit the turn 2 wall one time too many and lost his right-rear. Saturday night, Tyler Courtney threw a desperate slider at Bayston with two laps to go, only to slap the turn 2 wall and limp around the final lap and a half.

3 – crashes endured before the first lap of the WoO feature at Wilmot on Saturday was scored.

7 – number of yellow flags that flew in Thursday night’s pro modified feature at Macon Thursday before the first lap was completed.

13 – WoO wins for Brad Sweet in 2021 after scoring the feature at Wilmot Saturday night.

20 – positions Coltin Flinner made up in Saturday’s super late model feature at Port Royal to win the hard charger award.

Where it Rated (on a scale of one to six cans with one a stinker and a six-pack an instant classic): This weekend gets three lukewarm Fat Tires. The closing laps of Saturday’s Northern Swing feature at Jackson were good, but crash-fests at Wilmot and Macon along with two rubbered-up Hell Tour features made this one a bit blasé.

Up Next: We’re going, going, back, back, to Eldora, Eldora. And no, that’s not a Truck Series comment. This week sees the 410 winged sprints take center stage, with two King’s Royal features paying $175,000-to-win apiece take to the track on Thursday and Saturday nights. Coverage is available on Flo Racing.