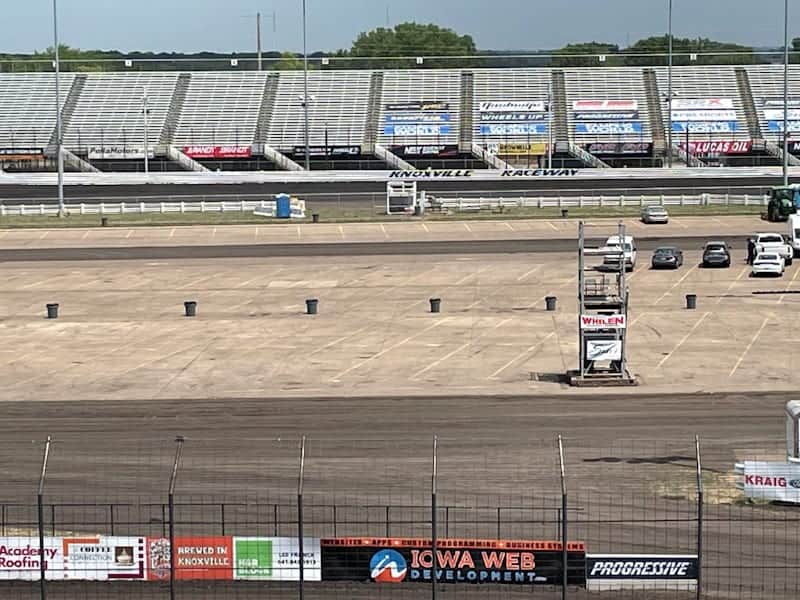 This weekend, the NASCAR Camping World Truck Series heads to Knoxville Raceway for the penultimate race of the 2021 regular season. Just two races remain to set the playoff field, and four drivers have already clinched based on wins (Ben Rhodes, John Hunter Nemechek, Sheldon Creed and Todd Gilliland), and Austin Hill locked himself in on points, leaving half of the playoff field open with the unknowns of this weekend on dirt ahead.

The half-mile dirt oval in Iowa with eight degrees of banking in each corner has a storied history on its own even though it’ll be the first time the Truck Series has raced there.

“It’s going to be quite significant,” Bob Wilson, the track historian at Knoxville told NASCAR.com. “It’s going to be the first time (the trucks visit) and it’s going to be a different sort of race than our regular people are used to seeing. However, I think the stands will be filled with NASCAR people who are really interested in this.”

Originally built in the late 1800s as a horse racing track, Knoxville hosted its first auto race just after the turn of the century in 1901. Following that first race, the track hosted a variety of football games, track meets and periodic racing up until World War II. It wasn’t until 1954 when the track hosted its first weekly event, and from there, the popularity has grown to the point the track has become known as the Sprint Car Capital of the World.

Fast forward to today as NASCAR prepares to descend on the track for the first (and hopefully not last) time ever, and the grandstands can seat just over 21,000, up 19,000 from what it was capable of holding in 1954.

As we learned in the days and weeks leading up to the Bristol Motor Speedway dirt race, plenty of work and science goes into getting the racing surface just right. In fact, according to NASCAR.com, “on a typical dry summer week, the track will go through 100,000 to 150,000 gallons of water to prepare for a regular sprint-car show.” Keep in mind that an average sprint car weighs right around 1,400 pounds compared to the 3,200 a truck weighs, so logic says even more water will be needed to keep the track surface raceable.

“What I want to see when the trucks hit the race track is a surface that has some moisture in it, but not to the point to where it’s definitely not standing water but almost to the point where it’s just starting to discolor,” Knoxville lead track prep director Chris Dunkin said. “Understanding that the trucks were going to come to Knoxville, you get that sense of excitement. It’s a privilege to have an organization like NASCAR come to a local track in Iowa.”

And even if the racing itself isn’t enough to bring extra eyes to the track, some of the new/different faces in the field will. In fact, six drivers will be making their Truck Series debuts: Morgan Alexander, Brian Brown, Jessica Friesen, Parker Price-Miller, Devon Rouse and Donny Schatz.

Additionally, Chase Briscoe is back with Roper Racing after the team was forced to take the Pocono Raceway weekend off, and Jett Noland is back with Niece Motorsports this weekend. AM Racing is fielding a second truck for Brett Moffitt, while Michael Annett, who made his last Truck Series start at Eldora Speedway in 2014, will run for Young’s Motorsports.

Much like when the series raced on Bristol’s dirt track, the complexion of race day will look a little different. Thursday evening (July 8), a random draw for qualifying order will be held based on owner points, followed by a lengthy practice session (7:05 – 8:25 p.m. ET), which will air on FOX Sports 1.

The following day, four qualifying races will be held to set the field. Each one will consist of 15 green flag laps with no overtime rules in place. Any caution laps will not count, however the free pass and wave around will be available. Drivers will be awarded points based on finishing position and passing in their qualifying race with the winner of each heat receiving 10 points down to one for a 10th-place finish. Passing points will just be the difference between starting and finishing positions, though no negative points will be awarded, and if a tiebreaker is needed, owner points will be used.

As far as the race itself, it will be broken into the standard three stages at 40, 50 and 60 laps apiece. The field will be frozen at the end of the stage for non-competitive pit stops and is the only time teams will be allowed to take on fuel or tires unless otherwise authorized by NASCAR for competitive reasons.

Race coverage begins at 7 p.m. ET on FS1 for the qualifying races with an approximate green flag of 9:11 p.m. ET for the main event.