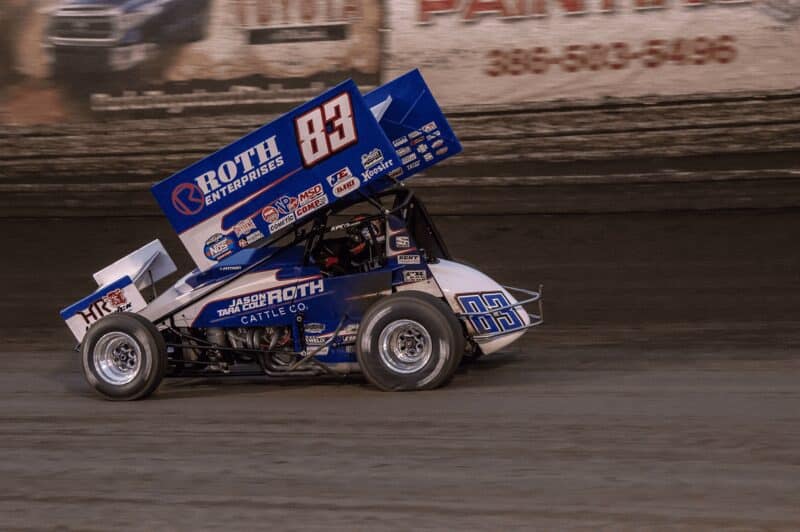 The road to big money at Huset’s Speedway is paved with track position. And will someone spin out Nick Hoffman already?

Austin McCarl kicked off the Showdown week in the Dakotas with a dominating win in Sunday’s 30-lap sprint car opener, leading flag-to-flag without any serious challenge in taking the win.

Said runner-up Dominic Scelzi, “I didn’t navigate the lapped cars as good as the No. 17a (McCarl). He was on offense the whole time.”

Spotlight: World of Outlaws
Where: Huset’s Speedway – Brandon, S.D. (streamed on DirtVision)
Why We Chose It: At $10,000-to-win, Monday’s highest paying dirt race.

Monday night’s WoO feature at Huset’s went 35 laps, but was arguably over on lap 10. Donny Schatz, under heavy pressure from David Gravel, chose to go underneath Parker Price-Miller in turn 3 instead of to the high side and paid the price for that decision when the lapped car hit its marks on the low side. With Schatz stuck in traffic, Gravel powered by in turn 4, and after weathering two more restarts for incidents on lap 12 of the feature, drove away for the win.

It’s his sixth win of the 2021 World of Outlaws season! pic.twitter.com/DC0TiMmxvF

Schatz did manage to get alongside Gravel for the race lead with five to go in the feature but could not sustain the charge. The track surface took rubber in turn 4 in the closing laps, leaving the leaders visibly smoking their rear tires on corner exit and limiting passing opportunities late.

Aaron Reutzel’s night was almost over before it began. Losing the lead on the opening lap to Schatz after starting on the front row, Reutzel and Carson Macedo engaged in a high-stakes battle entering turn 1 on the second lap that saw Macedo go flying into the catchfence… and the first lap erased from the record books due to the WoO rule that all cars must cross the start-finish line before the first lap is scored.

. @DIRTVision REPLAY: A crazy start to the beginning of tonight's Feature at @HusetsSD. @carson_macedo and Aaron Reutzel make contact and Macedo flips into the top of the fence! All drivers involved are okay! pic.twitter.com/r0CMvk0ZqU

From there, it was smooth sailing. Reutzel nailed the ensuring restart, as well as the restart after the competition “open red” thrown on lap 30 (more on that later), leading flag-to-flag to score the $30,000 Huset’s 50 win, Reutzel’s third WoO victory of 2021. The win also puts Reutzel in position to score a $100,000 bonus should he win the Saturday finale of this weekend’s Jackson Nationals.

. @DIRTVision REPLAY: Aaron Reutzel gets his third Feature win of the season tonight at @HusetsSD! pic.twitter.com/CW58hgQgL6

Spotlight: 2021 DIRTcar Summer Nationals
Where: LaSalle Speedway – LaSalle, Ill. (streamed on DirtVision)
Why We Chose It: After three straight nights of sprint cars, it was time to get my fenders on.

The story of the night was a record-breaking night for Hoffman, who led all 30 laps of the modified feature to score his sixth consecutive win on the tour, an all-time tour record.

Hoffman has not only won the first six races to kick the tour off, he’s led flag-to-flag in all of them.

Hoffman. See above. The fact that he had the DirtVision booth trying to manufacture drama in the closing laps of Wednesday’s feature when the second-place driver was nowhere close to catching him speaks volumes as to how much of a smackdown he’s put on every field of modifieds the U.S. has put on track in 2021.

Ashton Winger flipping a late model in qualifying Wednesday night is likely going to cause long-term pain in terms of the overall Hell Tour, but seeing his team immediately roll out the backup to have the driver go from ninth to a transfer spot in his heat race at LaSalle, a run that saw him pass powerhouses Shannon Babb and Bobby Pierce on the high side to transfer, was worth a fist-bump. Winger finished eighth in the feature.

A similar shout-out goes to Pierce, who had his worst night of the Hell Tour to date after winning three races in the first week of the tour. Pierce had to work Wednesday night, taking a provisional to make the field after cutting a tire in his heat race. Despite the feature going caution free, Pierce battled from the back to finish ninth.

It’s going to be sad not to see his name on any more entry lists, but Billy Moyer Sr.’s career is the literal definition of a success story. Now, time to go take out a loan.

Hall of Famer Billy Moyer is selling his race operation, race shop and home in Batesville, Arkansas. He asked me to help get word out. Check the replies for more videos. Anyone interested can contact me and I’ll get you in touch with him. pic.twitter.com/luKiPTjzqU

Brock Zearfoss’s rough and tumble 2021 continued in South Dakota. Monday night saw Zearfoss tangle with Reutzel in a lap-12 incident on-track, then incur the ire of podium finisher Kerry Madsen in what the DirtVision crew termed “extracurricular activities” that didn’t make the broadcast. Tuesday night then saw the No. 3Z team fail to qualify for the Huset’s 50.

It really was an accomplishment for Macedo’s team (and half the other crews in the pit area) to get the No. 41 car rebuilt and back on the track in time to take the restart after it ended up in the turn 1 catchfence at the start of Tuesday’s Huset’s 50. But for Macedo to average a finish of 13.5 over two nights at Huset’s despite the speed that was in his car was an abject failure.

There were no shortage of dirt racers and fans crying foul over Reutzel’s early-race block on Macedo Tuesday that sent Macedo into the fence.

Not that hard to do when you take out the fastest car on lap 2??

I choose to cry foul over the rule that wiped out that first lap and let Reutzel get a redo despite losing the lead to Schatz. It makes absolutely no sense to me that the first lap has to be completed by every single car in the field before it’s counted as an official lap. Yes, I’m sure trying to sort out 24 cars as they ran in the event a red flag flies in a sprint car race would be a labor-intensive exercise. It’s freaking 2021 and scoring is electronic. Figure it out. The race leaders should dictate when a lap is finished, and for Schatz to lose out on a killer start because the second-place driver threw a block on third place is asinine.

If there’s been a common thread to sprint car drama at Huset’s this season, it’s that lapped traffic, not the racing surface, is what makes stuff happen, be it handing Gravel the win Monday night or costing Justin Henderson a sure-fire win on opening night earlier this spring. Having said that, the decision to split Tuesday’s 50-lap feature into two segments doomed the race. Yes, there was real concern for tire wear, especially considering how much rubber the Huset’s surface took during Monday night’s 35-lapper. But besides my personal objection to breaking long races into segments (what’s the point of a marathon with rest breaks?), such a split significantly reduced the amount of time for lapped traffic to create drama at Huset’s. That Reutzel won in a snooze-fest rout was the only logical conclusion.

To avoid sounding completely cantankerous as a complainer, here’s my solution since tire wear was indeed a legitimate concern. Give each race team a hall pass for the feature where they can pit one time to change a tire without losing a spot on the track. From there, leave it up to them when to use it. Want to pit early and take your tire? Do it. Want to stay out and hope for a late yellow? Do it. Put tire wear in the drivers and teams’ hands and let the race play itself out. Anytime a race gets officiated like a K&N Pro Series race, it’s being done wrong.

Speaking of tire management, DirtonDirt reported the tire shortage gripping dirt racing across the country has reached such a critical level that the DIRTcar Summer Nationals have removed the option for drivers to put a softer tire on their high-wear right-rear corners for at least the coming week of competition. Racing with no soft tires allowed is putting the “hell” in the Hell Tour.

There’s no sprint cars on the Hell Tour, but they’ve got their own fire and brimstone issues brewing.

I’m not an advocate of dirty driving, but I’m not also not one to bend over and take it. When is someone just going to take a shot at Hoffman’s No. 2 modified? Six straight wins leading flag-to-flag is an obscene amount of momentum to concede to the odds-on tour title favorite.

I skewered both WoO series shows at Bristol Motor Speedway earlier this season for the sheer number of races won from the front row. In the interest of objectivity, I’ve got to call out the Huset’s Showdown races for the exact same thing. Between Sunday’s opener and the two WoO programs, 16 of the 18 features, last-chance races and heats were won from the front row, including all three feature races. For as pristine a facility as Huset’s is, the racing was anything but.

43 – number of sprint cars that showed up for Monday night’s WoO program at Huset’s.

Where it Rated (on a scale of one to six cans, with one a stinker and a six-pack an instant classic): We’re going to give this midweek a couple lukewarm Half Acre Daisy Cutters. Too many races being led flag-to-flag.

Up Next: The “Showdown” in the Dakotas continues at the Jackson Nationals, but this writer’s eyes will be turned to Lernerville Speedway and the annual Firecracker 100 World of Outlaws Late Model tour race. Both events will be available on DirtVision.