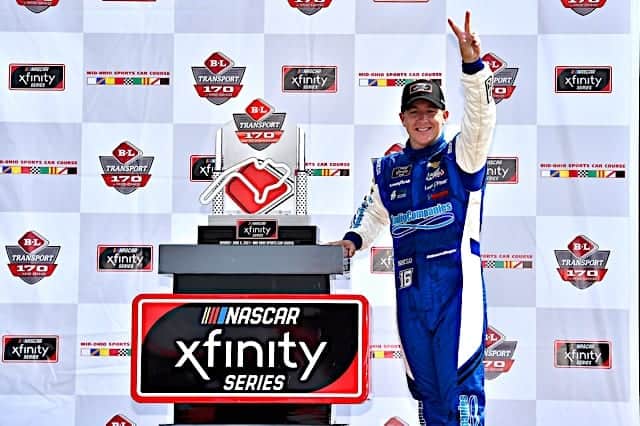 If anyone could have raced their way back up from 30th to first in 20 laps in the B&L Transport 170 at the Mid-Ohio Sports Car Course, it would be AJ Allmendinger.

Between Allmendinger and championship rival Austin Cindric, they had the best two cars in Saturday’s Xfinity Series race at the Lexington, Ohio road course. After receiving a penalty for not spending enough time on pit road during a green-flag stop due to modified pit road procedures, Allmendinger dropped to the rear of the field for the lap 56 restart. He methodically made his way through the competition, making quick work of the cars in front of him at nearly every passing opportunity he had.

Allmendinger drove to third place in 12 laps before Jeb Burton beached his Chevrolet in the turn four gravel trap, bringing out a caution. The leaders, including Allmendinger, did not come down pit road. To the surprise of many, leader Cindric chose the outside on the restart. That handed Ty Gibbs the inside and afforded Allmendinger an opening for the lead.

With four laps to go, the race restarted, and as the field approached turn one, Allmendinger took Gibbs and Cindric three-wide. Allmendinger came out on top and began to drive away. Cindric was sent spinning moments later from a separate incident and finished 14th.

After an overtime restart, Justin Haley finished second, followed by Gibbs, Brandon Jones and Andy Lally. The win makes Allmendinger the first repeat Xfinity Series winner at Mid-Ohio. He was the inaugural race winner back in 2013, a race that went into overtime. Saturday was only the second time NASCAR Overtime rules were utilized at Mid-Ohio, and Allmendinger has won both times.

Josh Berry didn’t make much noise as he made his first career Xfinity Series road course start. Initially, he wasn’t even scheduled to compete at Mid-Ohio as the No. 8 JR Motorsports entry was driven by Miguel Paludo. After qualifying into the race with Tyler Reddick behind the wheel at Circuit of the Americas and Charlotte Motor Speedway the past two weekends, Jordan Anderson hired Berry to drive his No. 31 Chevrolet. Even after two stellar performances by Reddick, it wasn’t enough to crack the top 40 in Xfinity Series owner’s points.

Unless Anderson put a past champion behind the wheel or hired a previous 2021 winner for Mid-Ohio, his team would miss the race. Berry’s win at Martinsville this past April, however, guarantees him entry to any Xfinity Series race in 2021. Berry started 31st and made his way into the top 20 before falling back deep into the field. Pit strategy helped get the team to 13th, but Berry faded to hover around 18th.

Still, Berry evaded the chaos during the final two restarts and closed out the day with an eighth-place finish.

So much fun today. This group took a guy that has never road raced anything and run 8th. We run our race and was there at the end. Thank you @j66anderson @BommaritoAuto @TeamChevy and @senshanemartin for putting us together! pic.twitter.com/dm3PofnIws

Circumstances played into Berry and Jordan Anderson Racing’s favor, but you can’t ignore the fact that Berry kept his car between the lines and wheeled this brand new team to a third straight top-10 finish in just three career starts. It further speaks to Berry’s driving ability and intellect behind the wheel to go out and turn a mid to low top 20s finish into a top 10.

Just as quickly as lightning can strike, sunshine can rain upon you, too. While Allmendinger had driven his way up to third place after restarting 30th following a pit road penalty, he was still 13 seconds behind leader Cindric. That is a margin he was unlikely to close without a mistake by Cindric or a caution.

With their regular pit crews working on the Cup Series at Sonoma Raceway this weekend, modified pit road procedures were in place for Saturday’s Xfinity Series race at Mid-Ohio, which is the only standalone Xfinity race of 2021. With these modified procedures in place, when Allmendinger made a green-flag pit stop on lap 47, he could only receive fuel and had to spend a minimum of 50 seconds on pit road.

The clock started from the moment he crossed the yellow line at the pit road entrance until he crossed the yellow line at the exit. Unfortunately for Allmendinger, he wasn’t just a few tenths off — he and his team missed the 50-second mark by a few seconds. Without the caution with eight laps remaining, this mistake costs Allmendinger the win. While it was a fantastic drive back to the top three, it falls into The Bad category as it was an irrecoverable mistake. But sunshine shone brightly on the No. 16 Kaulig Racing team when the caution flew with eight laps to go, restacking the field.

The scoreboard tells us that through 13 races, Noah Gragson has six DNFs and seven finishes outside the top 10. The No. 9 JR Motorsports team simply can’t catch a break, or when they run well, they can’t put a win together. Gragson didn’t even make it through turn one of Saturday’s Xfinity race at Mid-Ohio.

On the initial lap and into the hard left-handed turn one, Burton dipped his tires off the racing surface and into the dirt, kicking up dust. Two more cars in front of Gragson dropped their right-side tires into the dirt, and the dust tossed into the air blinded Gragson. He went too far off track, and his splitter dug into the dirt and possibly clipped pavement for an alternate circuit. Whatever he hit, the splitter ripped the oil pan off. He made his way around turn two but came to a rest before turn three of the first lap.

Road courses hold the potential to yield surprise top-10 finishers for both drivers and teams. There were a few in Saturday’s race at Mid-Ohio. Andy Lally finished fifth driving the No. 23 for Our Motorsports. All 16 of Lally’s Xfinity Series starts have come on road courses, and most have come in not-so-great equipment. On Saturday, despite brake issues, he wheeled the No. 23 to a fifth-place finish, his fourth career top five and eighth career top 10. It was also the No. 23’s second straight week inside the top 10 after not finishing there since Jason White’s 10th place finish at the season-opening race at Daytona.

Brandon Brown followed up a tremendous march to the top five last week at Charlotte with a sixth-place finish at Mid-Ohio, a career-best road course finish for Brown. His previous best was an eighth-place finish on the Daytona road course this past February, his first ever top 10 on a road course.

Berry and Jordan Anderson Racing finished eighth, but right behind Berry was Ryan Sieg in ninth. That matches Sieg’s best career finish on a road course, which came at Road America in August 2020. But like Brown, that is only Sieg’s second career top 10 on a road course. Although the finishes didn’t yield a significant points gain because Sieg lost four points on the playoff cutline, their finishes prevent damage to their chances of pointing their way into the playoffs.

Finally, in 10th place came Josh Williams. Williams earned his first career top 10 on a road course, coming just two weeks removed from missing the road course at Circuit of the Americas after failing to qualify.

“Go to the merchandise hauler and go meet up with some fans and maybe grab a White Claw or two. [smiles] I don’t know. That was a joke but have fun.” – Noah Gragson

“You know what, I’m more damn tired from the celebration there than driving. Wooo, I’m old.” – AJ Allmendinger

It was great to see the NASCAR Xfinity Series back in action at Mid-Ohio Sports Car Course after having its race canceled in 2020 due to the COVID-19 pandemic. The track always provides some great bumper-to-bumper racing. It’s a shame that Cindric caught the raw end of the deal when Haley attempted to push Gibbs, who got loose and nearly ran Annett off the track. Annett turned right to stay on and straight into Haley, who then knocked Cindric into the grass. The finish with that many solid cars was shaping up to be one of the best at Mid-Ohio.

I’m still not a fan of the modified pit road procedures used in the NASCAR Xfinity Series. We first saw them at Road America last August. Even though this will be the only time they will be used in the Xfinity Series in 2021, I would prefer only to see any form of modified pit road procedures performed in the Camping World Truck Series or other lower divisions.

The NASCAR Xfinity Series in virtually every aspect should be a mirror image of the NASCAR Cup Series. The Xfinity Series should go to different tracks and have standalone weekends, but live pit stops are an essential part of the product put on the track. Removing live pit stops from Xfinity Series races is like Minor League Baseball deciding that pitching machines would be used to deliver the pitch instead of a pitcher. It simply isn’t the same game at that point. I hope that when the calendar flips to 2022, travel restrictions and a more normal world have returned, and COVID-19 is behind us, allowing for pit crews to fly back and forth as they did before the pandemic.

After Xfinity Series teams return to their shops, they’ll pack up and head back to Texas for the second time in four weeks, with Texas Motor Speedway as the destination. The green flag for the Alsco Uniforms 250 will drop on Saturday, June 12, at 4:00 p.m. on FS1 and PRN. After Texas, the long-awaited return to Nashville Superspeedway is on Saturday, June 19, with Pocono Raceway following on June 27, the only Sunday Xfinity Series race of 2021.