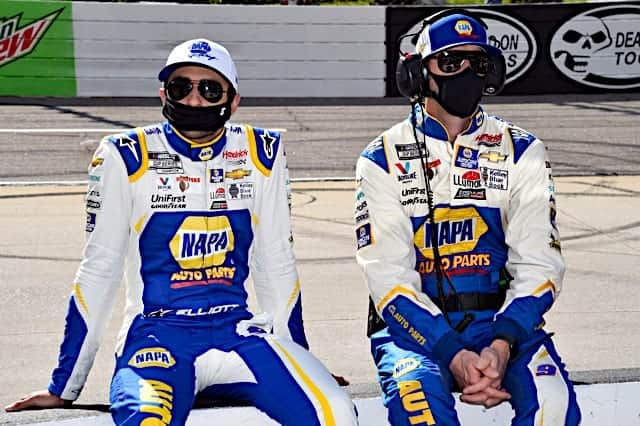 How will NASCAR handle the Eddie D’Hondt situation?

On May 27, news broke that Eddie D’Hondt, longtime spotter for Hendrick Motorsports, had been arrested two weeks ago on misdemeanor charges of assaulting a woman and battery against an unborn child.

The incident in question happened on Labor Day 2020. The first affidavit was filed in September soon afterward, while the second was filed on May 12 for assault on an unborn child, leading to D’Hondt’s arrest on that day. D’Hondt then traveled to Dover International Speedway and Circuit of the Americas for his day job.

I’m not going to get into the specifics of the case itself. The court cases are next month, and instead, I want to focus on something else.

Regardless of the outcome going forward, there is one giant issue at hand here. When suspending him later that day, NASCAR cited rule 2.11 in the rulebook, which states that a NASCAR license holder must inform NASCAR if they are arrested or charged for a misdemeanor or a felony within 72 hours. In this case, NASCAR was not informed until the day this whole story broke, for an incident that happened eight months ago.

Unless D’Hondt can provide evidence that NASCAR was properly informed, this will hurt his career prospects going forward. The key is to be upfront with deals like this; had he informed the sanctioning body when the arrest happened, he’d probably still be suspended but he’d almost certainly be guaranteed reinstatement if the case is dismissed or he is found innocent. Now that whole process just got potentially much murkier with his choice not to inform NASCAR.

Can Scott Dixon take another step from legend to icon in Indianapolis?

The 105th running of the Indianapolis 500, back to its traditional Memorial Day weekend date after spending last year in August due to the COVID-19 pandemic, could very well end up being the defining victory in Scott Dixon‘s career if it works out that way.

Dixon, who has only won the 500 once, has built a resume otherwise in open-wheel that is on par with AJ Foyt and Mario Andretti. The points leader needs just one more NTT IndyCar Series championship to tie with Foyt for the most in history, and he’s only behind Foyt and Andretti when it comes to overall wins. But having just one Indy 500 win to his name could ultimately hurt Dixon’s legacy.

In NASCAR, if a driver can’t win a Daytona 500, it’s not the end of the world for them. Mark Martin and Tony Stewart both ended up just fine without winning one. But in American open-wheel racing, the 500 is a dramatically bigger deal than any other race. Sebastien Bourdais is a big name in the history of open-wheel racing, with four championships, and just six more drivers have won more races in history. But he’s virtually unknown to the general public, simply because he has never been able to win the Indy 500.

The reality for Dixon is that he’s starting to run out of time at age 40. The 500 is only contested once a year; the 20-year veteran is probably well into the second half of his career when it comes to this race. He’s got to get more wins in this race if he wants to break into that tier. Andretti was able to do it with one 500 win, but that was with a successful career in Formula 1 and a win in the Daytona 500, both of which are not going to happen for the Aussie.

Besides the pole sitter, there are a number of other stories in the field. Defending winner Takuma Sato is aiming for his third victory, while Bourdais and Josef Newgarden are in the hunt for their first win in this race. Keep an eye on Santino Ferrucci on Sunday; the transitioning stock car driver has impressed in his limited experience at Indianapolis Motor Speedway.

Will Chase Elliott have revenge in the Coca-Cola 600?

Due to the Grand Prix of Monaco running a week early this year, the second and final leg of Sunday’s day of racing will be the Coca-Cola 600.

It’s a race I can’t say I’m looking forward to. The racing at Charlotte Motor Speedway just hasn’t been good in years on the oval layout, with all excitement last year compacted in the final laps due to multiple restarts.

Chase Elliott lost the race last year after pitting on the final caution from the lead. While the team recovered by winning a championship six months later, crew chief Alan Gustafson has probably had this race circled on the calendar for a year now. With how good Hendrick Motorsports has been recently, there’s no reason to doubt the organization’s winning streak will extend to three.

Is Kurt Busch coming back?

Fake, not outright parody, accounts are a major problem on social media and will keep being a problem as technology continues to advance.

That being said, sometimes the dismissal of their fake news can be a little funny, be it a few years ago when Matt Kenseth complained about some dork in their parent’s basement claiming he would be retiring or another Cup champion this week doing the same.

Kurt Busch, as one of the three seniors on the Cup tour now along with Ryan Newman and Kevin Harvick, had some fun with discrediting that news. Reasonably, though, he just shared a video that says that he’s coming back.

If Busch does decide to come back — and it’s understandable if he chooses not to — it would only make sense if he’s going to stay with Chip Ganassi Racing. It has been a great relationship for both driver and team. But if changes his mind and retires after this season, he will take his place in the Hall of Fame with a full resume.