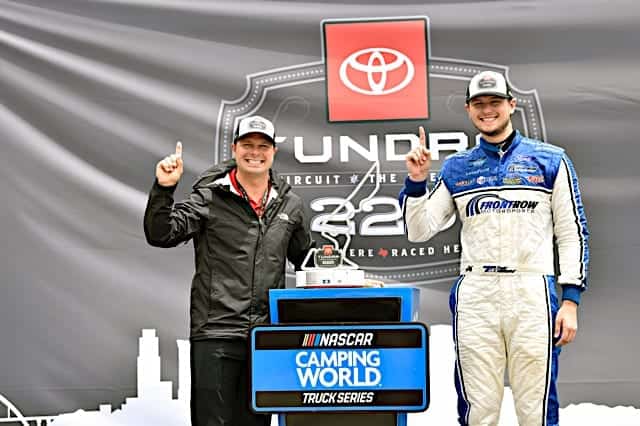 Todd Gilliland scored his first win with Front Row Motorsports in last weekend’s (May 22) Camping World Truck Series visit to Circuit of the Americas. He led just four laps on a rainy Saturday afternoon and took the victory by a whopping 7.941-second margin over Kaz Grala.

But what was probably forgotten in that win was that after winning stage one, he was forced to restart stage two in the back of the pack following a penalty for a crew member over the wall too soon on his pit stop. Despite the challenges of running from the back of the field, Gilliland said “it was actually a lot of fun.”

“I was really just happy that we won that first stage; I thought that was a huge step for our team,” he told Frontstretch in a phone interview. “That makes it two races in a row that we’ve won a stage, and that’s the consistency that we’re really, really trying to focus on. I thought that made it a great day at that point.

“Once I got back there, that’s when I realized it was incredibly hard to see and I couldn’t tell if it was raining that much harder or if it was spraying off of other trucks. I was just trying to figure out what I could see visually and try and make some braking-markers decisions based off of that stuff.

“I think just driving through the field made me really think about my truck,” he added. “We actually went back on some changes that we made during the middle run for that last run, and I think it definitely helped us out.”

Having a victory at this point in the season changes his mindset when it comes to approaching race weekends in general since Gilliland is now locked into the playoffs, something that wasn’t originally on his mind when he took the checkered flag.

“It’s super relieving,” Gilliland said. “Just as a racer, you’re so focused on winning the race that you’re in at the moment. When I got out, it was the $50,000 bonus on top and that made me super excited.

“Then when I got back to the press conference deal they said, ‘you’re locked into the playoffs now,’ and I was like, ‘dang, that’s awesome.’ You kinda take a deep breath and you can really go out there and just start racing again for the fun of it.

“For the last year-and-a-half straight, I feel like we’ve just been scratching and clawing for every single point. We made the playoffs last year, which was a huge step but we barely did and obviously not with a win. It’s huge and now we can start looking ahead to maybe building a new truck for the playoffs, a new mile-and-a-half truck. We can look farther ahead and be better prepared when we get there.”

For the No. 38 team, it’s another step in the right direction. The victory marks the organization’s fourth top 10 in the last five races, with the only outlier being a 15th-place run at Darlington Raceway where Gilliland led 17 laps.

“I don’t really know that we really changed that much. That’s the interesting part.” Gilliland explained. “Even at this time last year, we ran pretty well, and then come playoff time, we kinda fell off a little bit. I’ve just been really stressing to our guys that we need to be our best come playoff time.

“I think they’ve just been really working hard on the simulation, using all the tools that Ford has given us. It’s hard to use that stuff in the first year; you don’t know how much you can really trust it. But I think we’ve definitely found a much better direction with no practice being able to guess on our setups a little better.”

In just his second year with Front Row in the Truck Series, Gilliland has had a large hand in building the team from the ground up after spending his first two (mostly) full-time seasons with Kyle Busch Motorsports. And there’s a big difference when it comes to building a team from the ground up versus stepping into one that’s already established as a championship winner.

“I think there’s a lot more open minds,” Gilliland said. “You start at KBM; they’d won championships and races for years and years before I got there. But also the trucks continue to change, the motors change, everything’s changed since they won a lot of championships.

“Definitely after we won this race at COTA, I had a lot of satisfaction knowing we started this truck team, we hired all of these guys and Front Row is just working really hard at the fab shop,” he continued. “All their guys have taken us in; I don’t know if they were super happy about having to do that much more work at the beginning of it but I think they’ve taken us under their wing and really put a lot of pride into our stuff. It’s super cool to see how much everyone cares.”

For FRM, in general, the 2021 season has been one for the books. It opened the year with Michael McDowell‘s win in the Daytona 500, something many would have pointed to as a fluke, especially with superspeedway races acting as a bit of an on track equalizer for even the lower budget teams. But McDowell has followed it up with his best Cup season to date.

“I’ve only been there two years; [the atmosphere is] head and shoulders above last year, and I can only imagine beyond that,” Gilliland said about the mood at the shop. “I think it boosts morale to have teams that run competitively when you know you’re not that far off. I think it would grind anyone down to run in the back every single week, and just have these glimmers of hope makes a huge difference.

“Everyone has probably worked on a winning race team at one time had that feeling, I think just being that little bit closer that the Front Row Cup cars are running, I think that makes all the difference in the world.”

At the time when Gilliland joined FRM, he was in a precarious position knowing that his time with KBM was coming to an end. After all, team owner Kyle Busch was very publicly critical about his drivers multiple times throughout the 2019 season. At that point, the then-19-year-old knew he wanted to keep racing and it was just a question of what opportunity would come up.

“With my dad racing at Front Row for a number of years, I grew up around Bob Jenkins and their whole organization, Jerry Freeze, the general manager, just having those relationships; they were like family,” Gilliland said. “We just got to talk to them and they really took a chance on me to win races, and Bob really believed in us – me and my dad – and crew chief Chris Lawson.

“They really just went out on a limb and did the whole thing. It’s super cool the whole process it took to get here.”

Now in his fourth full-time season, it’s not lost on Gilliland just how much he’s grown since entering the Truck Series as a rookie in 2018. In fact, he mentioned during media availability earlier this week that he feels like he’s “10 times better” than he was when entering the series. Experience will do that for you, but there’s a little more to it than just that.

“I think I’m a much better, well-rounded driver,” he elaborated. “When I got into the Truck Series I could go fast, but I didn’t really have the racing knowledge of pit stops. We have two or three chances to work on our truck. A lot of times I would take us out of contention before our first pit stop, and then really you’ve ruined your whole race before it’s even started.

“I think that’s the thing I’m trying to focus on; being smarter, the longer races. Scratching, clawing for every point has made me appreciate the good runs and make the most of the not-so-good ones.”

That mindset has likely made a difference in these first two seasons building the FRM Truck Series program, and more importantly, it sets the 21-year-old up for long-term success in this sport. He maintains you “really have to focus on the here and now [because] you don’t really know, it could be gone tomorrow.” Ultimately, Gilliland does want to move up the ladder in NASCAR, just like any other driver would.

“I think if we can definitely win some more races, I’d love to have a home at Front Row Motorsports for years to come,” he said. “That’s our focus: live in the day and focus on the next race ahead of us. But if we win a bunch of races, hopefully, we have some options, but I’d love to definitely have a long-term future at Front Row.”

The Truck Series hits Charlotte Motor Speedway for the North Carolina Education Lottery 200 on Friday, May 28 with live TV coverage on FS1 starting at 8:30 p.m. ET.