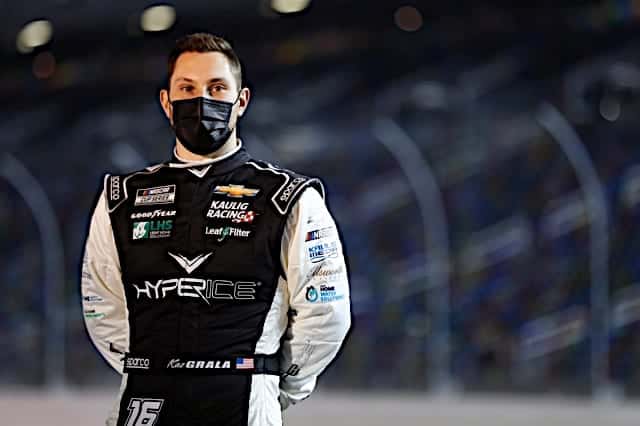 What does the future look like for Kaz Grala? He’s consistently performed in whatever equipment he’s put in and seems to have a bright future ahead of him. – Doug K., Charlottesville, Va.

If I’m a NASCAR Cup Series owner (I’m not, just for clarity here), Grala would be on my short list of candidates to put in a vacant seat. He’s a young driver who has made the most of his limited opportunities, represents his sponsors well and can flat out race.

He’s only made three Cup starts, but has finished inside the top 10 twice. Limited sample size and two of the three have come on superspeedways, but stats are stats no matter how you slice them. He finished top 10 in three of his five NASCAR Xfinity Series starts for Richard Childress Racing last year and recently impressed at Circuit of the Americas in a Young’s Motorsports truck, finishing second after leading 11 of the 41 laps.

It’s no secret Grala wants to be in Cup too. He was slated to have a full-time opportunity at the premier level this season, only for lack of sponsorship to curtail his efforts.

We can still close these deals, but I need a little help from you guys ?? pic.twitter.com/M8SZRpt2m3

He still was able to land a limited schedule with Kaulig Racing (who are going full-time in Cup next year) and has remained close with team president Chris Rice, as well as owner Matt Kaulig. With Grala being a young, marketable driver at age 22, he would be a great candidate to fill Kaulig’s vacant car for 2022, if not Justin Haley or AJ Allmendinger.

There lies the issue, though. Two drivers (one a proven Cup winner, one also a Cup winner with multiple years of Xfinity experience under his belt) are also in the mix (theoretically) for that ride, which may leave Grala out of a competitive Cup ride.

Or so we think. Silly Season works in mysterious ways, and who knows what team(s) may expand, which new teams may enter the sport with the introduction of the NextGen car or if a departure of Allmendinger or Haley leaves a vacant Xfinity ride with Kaulig open.

Would Grala be open to running full-time in Xfinity despite already theoretically having proven himself at the top level? Only he knows the answer. But one thing is for sure: the NASCAR world is taking notice of the youngster, as he’ll be around for years and years to come.

Even though the visibility was an issue, the Goodyear rain tires held up well. Could we see rain racing on ovals since we know the tires work? Amelia Y., Omaha, Neb.

There’s been a wet weather test at Martinsville Speedway, and Joey Logano revealed that he’d be participating in one this week at Richmond Raceway. But in terms of racing in the rain (or even damp) at bigger tracks like, say, Atlanta Motor Speedway, Texas Motor Speedway, Darlington Raceway or Daytona International Speedway, that won’t be happening.

It’s just too unsafe. You see what happened in the rain this past weekend at COTA, last year at the Charlotte Motor Speedway ROVAL and in various other rain races across all three national series over the years. And that’s when cars are relatively slow and camber/loads on the vehicles aren’t what they are on ovals.

See also
Zach's Turn: Why Did NASCAR Allow Such Dangerous Conditions at COTA?

Simply put, the speeds are too high, loads are too great and risks are too catastrophic to race in the rain on bigger tracks. But that doesn’t mean they can’t do so on short tracks. In fact, that’s the plan.

The wet weather test at Martinsville was  implemented in the hopes of potentially debuting race-ready rain tires for ovals like “the Paperclip,” New Hampshire Motor Speedway, Richmond and others.

“It’s certainly ambitious,” NASCAR’s Senior Vice President of Racing Innovation John Probst told NASCAR.com earlier this year regarding the possibility of using the rain tires on ovals this year. “I’m not going to say it’s impossible, but there’s a lot of data we need to go through. We need to not only look at can it be done, but what tracks lie ahead, and there’s a whole lot of different variables that get brought into the mix, including the weather. … I wouldn’t say no, but I certainly wouldn’t sign us up for it either — just yet.”

But getting back to COTA this weekend: that certainly was a bright spot. Even with all the standing water, all the slipping and sliding, all the scary crashes, the Goodyear tires did their job and did so extremely well.

Offensive lineman in football (and Corey LaJoie, actually) have a rule: if TV doesn’t talk about you, it means you’re doing your job. The same can apply to Goodyear. Take the small victories when you get ’em, work on developing for the future, but stay realistic through it all.