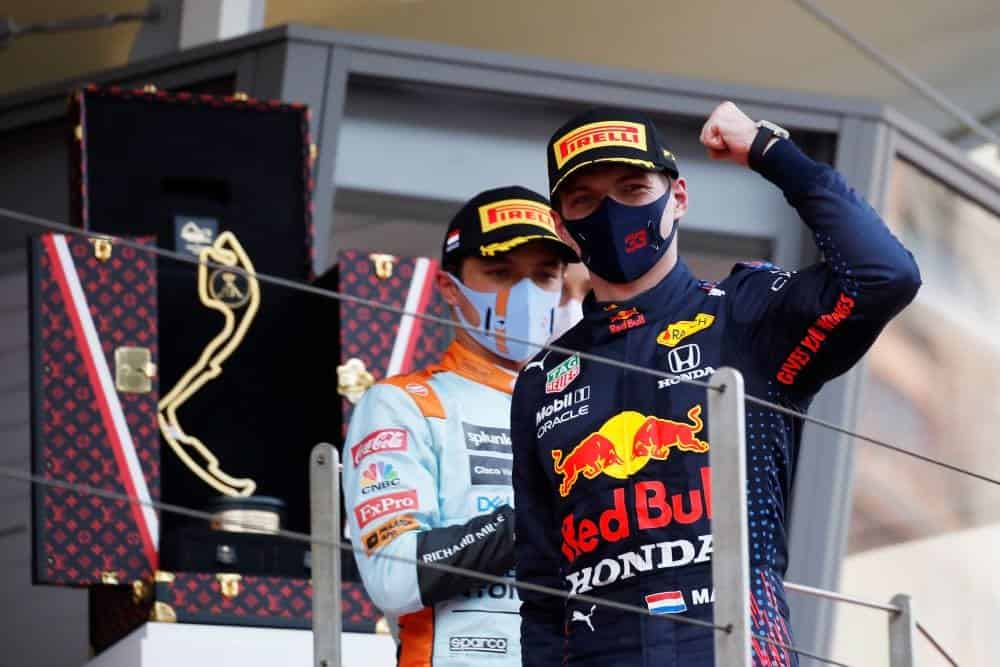 All season long, Max Verstappen has been hot on the heels of Lewis Hamilton. Heading into the Monaco Grand Prix Verstappen needed a good showing, and Sunday (May 23) on the streets of Monte Carlo he did just that.

Despite never standing on the podium before at the legendary circuit, Verstappen took advantage on his impromptu pole start to claim his first victory at the Circuit de Monaco, claiming the lead in the points standings for the first time in his career.

Despite the issues suffered by his teammate Charles Leclerc, Carlos Sainz came home second for his first podium with Ferrari and first since Monza last season. Completing the podium was Lando Norris in the special Gulf livery for McLaren, logging his second podium of the season and tying his best career finish.

Valtteri Bottas and Charles Leclerc were the only DNFs of the Grand Prix.

Before the race even began, Charles Leclerc’s bad luck streak in Monaco came to an end before it ever began. Despite scoring the pole Saturday, a devastating wreck at the end of Q3 caused irreparable damage to the car. Forcing him to retire for the fifth consecutive time at his home race, Leclerc stated that damage was as a result of the accident not gearbox damage as previously suspected.

When the lights went out, it was an excellent jump for Verstappen who cleared Bottas easily going into Sainte-Devote. As Verstappen extended his lead, Monaco’s reputation for being a tough track to pass at bit points leader Lewis Hamilton hard.

Being stuck behind Gasly, Hamilton’s pace fell of a cliff and the team decided to pit his Mercedes first on lap 30. While Hamilton’s stop went off decent, he ended losing spots to Gasly, Perez and Vettel. An irate Hamilton expressed his shock on the radio, but Mercedes had another issue to deal with.

Hamilton’s teammate Bottas was running second and he came into pit on lap 31. The pit stop looked good until the right front tire failed to come off. The team tried and tried, but nothing they did worked. The bolt inside the tire appeared to have fused and broken, meaning that tire wasn’t going to come off without taking the whole mechanism apart. With Bottas forced to retire, it opened the door for Sainz and Norris to enter podium spots.

Corner cutting and racing line violations have been a hot button topic all year, and the stewards weren’t playing around. Hitting Norris, Nikita Mazepin, Yuki Tsunoda and Mick Schumacher with black and white flags, luckily nobody received a time penalty.

As the laps clicked away, Sainz mounted a charge to catch the Red Bull but alas it was for not. Verstappen came across the line in dominant fashion to win at Monaco, claiming win number two on the season and number 11 of his career. Hamilton would save face, picking up the bonus point for fastest lap on lap 71.

“It’s so special to win, and for me a first podium here” Verstappen said. ” So many laps, but it’s really cool. You never know what’s going to happen here, it’s all about looking after your tyres.”

While Verstappen celebrated, for Ferrari this podium was a showcase to how they recovered from what could’ve been a disaster after the Leclerc issue. The Spaniard in his first year at the Prancing Horses, consider this second place almost as good as a win.

“Before coming here, if you’d said finish second I’d have taken it” expressed an elated Sainz. “When I reflect back on the weekend I’ll be happy and proud, and I think Ferrari should be proud of the car.”

In the standings, Verstappen sits atop the charts with a four points lead over Hamilton. With a tally of 105 to 101, the close margin means every point is that much more critical.

The tour heads to its second straight street circuit June 4-6. The Azerbaijan Grand Prix serves as another opportunity for Verstappen and Hamilton to battle it out at the front. The race was absent in 2020, but the defending winner from 2019 is Valtteri Bottas.

Judging by some of his radio communications, Hamilton doesn’t seem to handle strategy not working out very well. Valtteri’s problem was the first I’ve ever seen.

Surely not the first problem you have seen with the single lug nut. They manage to have slow stops because of them fairly regularly. Seldom one that bad it’s true.
Lewis is a great driver, but a bit of a whiner.
The pity is Charles messing himself up with his crash yesterday. But since it was self inflicted, oh well.

I meant it was the first time I’ve seen the car taken out. Let’s hope it happens again to one of Reverend Joe’s cars in 2022 with the latest version of the Car of Next Year.

You really think Gibbs is any worse than the rest of the mega team owners?
I certainly admit that they are all successful businessmen and have their drawbacks.
Or is this something else?

Great to see Lando Norris and McLaren on the podium with the awesome retro Gulf livery.