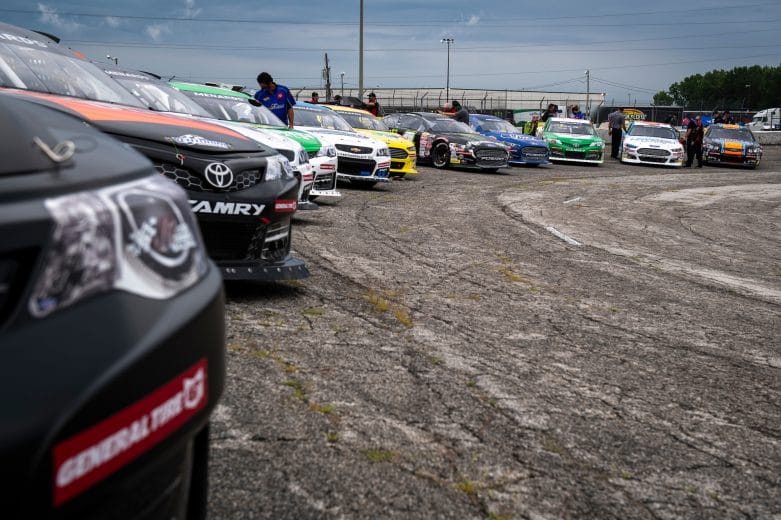 After a three-week reprieve since its race at Kansas Speedway, the ARCA Menards Series goes short track racing with Saturday night’s (May 22) Herr’s Potato Chips 200 at Toledo Speedway.

Last year, Sam Mayer swept the races at this half-mile short track when it hosted two races on July 31 and August 1. However, Mayer and previous Toledo winners are not entered in Saturday night’s race. This may be another wide-open race, the first of 10 events making up the Sioux Chief Showdown.

Moreover, the fifth race of this season will be the 51st ARCA race held at the Toledo, Ohio venue. In addition, this will be the first of three consecutive ARCA races at three distinct venues.

Per ARCA Racing’s official website, Saturday night’s race will include a break pit-stop procedure with breaks approximately around laps 75 and 125. Each driver must make at least one pit stop before the final 10 laps of the race. Although teams cannot add or move tires to or from the pit box once the race starts, they will be allowed a maximum of six sets of tires.

While only 15 drivers are entered in Saturday night’s race, this race may prove to be a preview of how the championship favorites, Corey Heim and Ty Gibbs, may fare on short tracks.

Heim, who enters Toledo as the points leader, hopes to improve on his 10th-place finish logged in 2019 at this track. Needless to say, the 18-year-old racer is focused on the basics.

“Just be really consistent, make sure we’ve gotten everything we need to as far as how the track’s going to change from day to night, and make sure we’re on it,” Heim said in a pre-race Zoom conference call. “It’s going to be a team effort. I can’t do it alone and my team can’t do it alone. So, all it takes is one of us to be off on Saturday and it might ruin our whole day. I’ve just got to do my job and keep everything in control that I can and I’ve got to show up and be ready to win the race.”

As competitive as Heim may be as a driver, the Georgian’s perspective on his challengers might harken the iconic New England Patriots head coach Bill Belichick.

“I don’t really single out any specific racer,” Heim said. “I race people how they race me. I’m trying to beat every single person in the field. So it’s not just about one person. You can have guys that really show up and are just on it. So, I kind have to be prepared for anything.

“There’s a couple of new guys at Toledo. I don’t think it’s a terribly technical track so they should get up to speed pretty quick. And I think it’ll be a pretty good race for the win.”

Jesse Love, a 16-year-old racer from Menlo Park, California, looks to make some noise in his No. 15 JBL Toyota Camry prepared by Venturini Motorsports. When asked how he prepared for Toledo, he offered his insights initially in jest.

“NASCAR Heat 4,” Love said. “No, I’m kidding. This weekend at Toledo, I’m just going to focus on me and what I can do to make my lap time and my race the best race that I can run. …

“But I think I just need to take a step back and focus more on making Jesse Love go fast, right? So, that’s kind of what I’m focused on this weekend. I think that kind of adds to my confidence this weekend and kind of get me back on the right track and I’m looking forward to it. And, we’ll see how it plays out.”

Like Heim’s approach, Love’s attention will be with himself and his fast drive although he points to his determined teammate.

“You never know,” Love observed. “Corey might be really good. He’s always been fast and he’s a good driver. There’s some other guys too. But, at the end of the day, [if] you’re focusing on that, you’re not focusing on yourself. My job is to go focus on myself this weekend and that’s what we’ll go do. And whoever wants to put a fight can put up a fight.”

Meanwhile, Thad Moffitt looks to improve on his past results at Toledo. In four starts, Moffitt placed 23rd, 10th, 12th and eighth at this short track. After a strong third-place result at Kansas, the 20-year-old racer plans to exercise some patience on Saturday night.

“I’m really excited to get to Toledo,” Moffitt said in a team press release. “We’ve had really good speed there in the past, but just haven’t had any luck fall our way. I plan to be patient and let the race come to me and see where we stack up. Our DGR Fusions have been fast as of late and I look forward carrying that into this weekend.”

Adam Lemke, 18, of Hollister, California, looks forward to his ARCA debut with Rette Jones Racing at Toledo. The late-model racing graduate expresses humility and confidence ahead of his maiden start.

“I’ve been so fortunate and blessed to experience and win a lot in such a short amount of time,” Lemke said in a team press release. “No doubt, moving to the ARCA Menards Series and these heavier cars will be challenging. But that’s where I will lean on my team for guidance and direction.

“Our goal is a top-five finish at Toledo. And based on the speed the team has shown this year, I think we can not only accomplish that but contend for the win too.”

Drivers and teams will have a 45-minute practice session starting at 4:15 p.m. ET. Qualifying is at 6 p.m. ET before the race on Saturday night.

The Herr’s Potato Chips 200 at Toledo Speedway kicks off just after 8 p.m. ET with MAVTV providing the TV coverage.

What a joke, only 15 cars entered. Toledo is where ARCA got its start. Even Kimmel is not entering a car. Venturini and Hillenburg has 8 cars out of the 15 cars entered.

And they will still make a big deal out of someone getting a top ten finish.