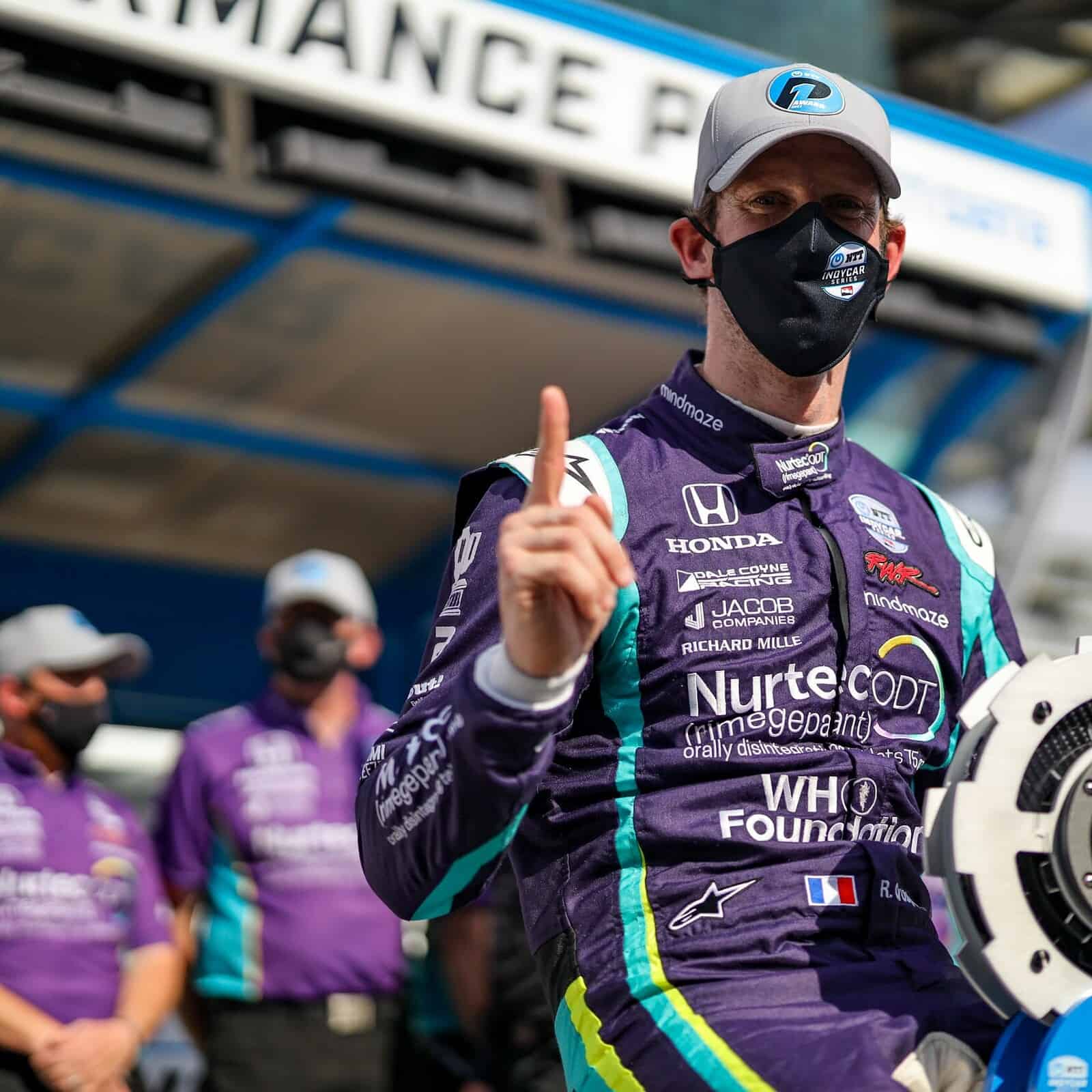 Just 166 days after a fiery crash gave Romain Grosjean second-degree burns on his hands at the 2020 Bahrain Grand Prix, the Frenchman scored his first pole position in the NTT IndyCar Series for Saturday’s GMR Grand Prix at the Indianapolis Motor Speedway road course.

“[It was] a long time ago that I was on pole position,” Grosjean said. “That feels obviously super good going into the weekend. For me, it’s very special to be racing here. I’ve been on some of the most famous tracks around the world. When I came to Indianapolis for the first time, I realized the atmosphere around, the grandstands, everything that’s happening here, the history of the place.

“Going onto the weekend, we obviously did a lot of work to be good and also just learning about it. Our first segment of (qualifying) wasn’t so good. Second one felt much better. Going into the Fast Six I never ran scrub red tires, so I didn’t know what to expect from the car. It behaved really well.”

The second group of round one was a bit more stacked, as there were three Team Penske cars competing alongside three of the four race winners so far this season. All three Team Penske cars advanced, with Newgarden fastest over Alex Palou, Scott McLaughlin, Conor Daly, Grosjean and Will Power, who advanced by only 0.005 seconds.

This result provides for a massively jumbled grid for Saturday’s race. Both Texas winners were eliminated, with Dixon also having won last year’s GMR Grand Prix.

In round two, Power completed one lap before spinning at turn 13, bringing out a red flag and eliminating the No. 12 Team Penske Chevrolet from advancing to the Firestone Fast Six, owing to a rule where if a driver brings out a red flag, they cannot continue in the session or advance to the following round.

Power would qualify 12th as VeeKay, Herta, Jones, Pagenaud and Rahal were also eliminated, starting seventh through 11th in that order. Advancing to the Fast Six were Palou, Harvey, Grosjean, Daly, McLaughlin and Newgarden.

Grosjean would prove to be the fastest in the final session over Newgarden, who knew how fast the Formula One veteran could be.

“I mean look, Grosjean’s a great driver, I’m not surprised that he’s adapted super well, much like Scott McLaughlin,” Newgarden said. “Like, he’s done a stellar job, he’s right on the pace, but you can jump in any car in this series and have a shot at winning, you really can. And I think that’s the great thing about what IndyCar is right now is that there’s so much parity, so much competition, you don’t know who’s going to win each weekend.”

Row two is an all-Honda affair with Harvey’s No. 60 Meyer Shank Racing car just ahead of Palou’s No. 10 Chip Ganassi Racing machine, while McLaughlin and Daly were fifth and sixth, respectively.

Five different teams were represented in the Fast Six, and this was Daly’s first time ever in the final round of road course qualifying.