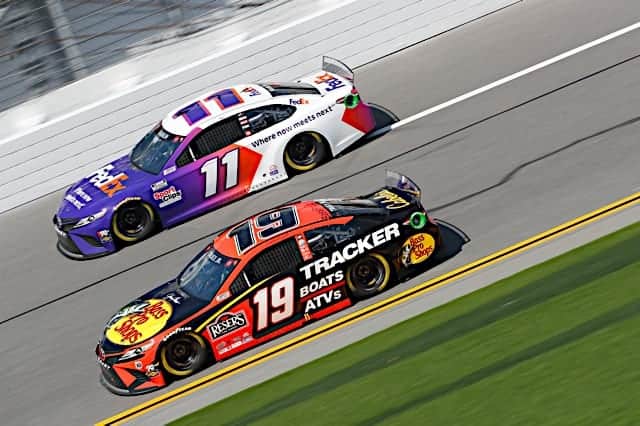 The NASCAR Cup Series travels north to Dover International Speedway for Sunday’s (May 16) Drydene 400. Who will tame Miles the Monster and earn a high daily fantasy NASCAR DraftKings score? Keep reading for my top prospects for this weekend’s race.

Wait a second; why is Dover called the Monster Mile? Well, oftentimes the track would come out and bite cars, causing wrecks. Not literally, of course, but its features create a treacherous landscape: It has 24-degree banking in the turns along with a long frontstretch and backstretch. One wrong move can send a vehicle spinning, which could lead to crashes further back in the pack. Some of the more memorable incidents at Dover are below.

Additionally, it’s an older, abrasive track, so drivers will need to manage their tires properly if they want to make up ground later in a run. The NASCAR Cup Series has competed at a few rough racetracks already this year — Darlington Raceway, Atlanta Motor Speedway and Homestead-Miami Speedway — so you can use information from them to help form your lineup. Note that the only event run with the high horsepower, low downforce package was Darlington.

Last year, NASCAR adjusted its Cup schedule due to the COVID-19 pandemic, making the events at Dover just 311 miles each. These were run on back-to-back days with Denny Hamlin and Kevin Harvick dominating in their respective races. Despite just one 400-mile race at the Delaware venue this year, you’ll especially want to target potential lap leaders for your daily fantasy lineup. Furthermore, crashes can create attrition, allowing some lower-salaried drivers to pick up a few spots by race’s end. A stars and scrubs approach may be more ideal than a more balanced lineup.

Before I share this week’s picks, I’ll review what happened at Darlington last week.

There were no negative scores this time, although Ryan Preece totaled 21 DraftKings points. Still, with such a strong performance from Martin Truex Jr. (who led 248 laps), you needed to have him in your lineup if you wanted to cash in tournaments.

The minimum score in the $1 Happy Hour tournament was 235.05, which earned $1.50. However, the above roster did win the large $1 single-entry double up.

You should definitely consider Truex first when filling out your NASCAR DraftKings player pool, as he’s been one of the most dominant drivers thus far. As noted above, he led 248 laps at Darlington last week en route to his third win of the season. He also recorded 62 fastest laps, increasing the total DraftKings score to 137.9.

Truex’s two previous victories this season came at one mile or less venues using the higher-horsepower package: Martinsville Speedway and Phoenix Raceway. Truex has consistently shown speed at these track types, posting at least 41 fastest laps in four of five tracks (the fifth one was a road course). A combination of high speed and laps led can really boost your fantasy score on DraftKings.

Additionally, the No. 19 Joe Gibbs Racing pilot has performed very well at Dover. Truex has four consecutive finishes of first or second and has ended no worse than 15th since 2014. He’s also led over 100 circuits in four of these races, most recently in spring 2019. Last year, he led 88 laps before ending runner-up to Hamlin.

With these statistics, it’s no wonder why Truex is the most expensive driver on DraftKings. He’s starting on the pole, too, which gives him a greater opportunity to be out front for the majority of the race.

While Truex has three wins, JGR teammate Hamlin is still searching for his first trophy of the season. It’s a bit surprising, considering he won seven times in 2020, but the 2021 point leader does have one thing going for him: consistency. Hamlin has nine top fives in 12 races so far and has kept a good pace at the three shorter courses. At two of these tracks, Martinsville and Richmond Raceway, he recorded over 80 quickest laps in each event. These, combined with 200-plus laps led, increased his DraftKings score to 130 or higher.

As I stated in the intro, Hamlin broke through for his first win at the Monster Mile last year in his No. 11 Toyota. He led 115 circuits and posted 61 fastest laps on the way to his sixth win of 2020. Additionally, he held the top spot for 218 laps in the fall 2019 event before coming home fifth. Hamlin has two top fives and seven top 10 finishes in the past 10 Dover races, though he’s only led laps in three of these. Still, it’s not bad considering other driver’s performances there.

If he can record fast laps on Sunday and finish well, Hamlin should have another good DraftKings score.

I wasn’t initially on the elder Busch brother but decided to fit him in my lineup after looking at his results this year and at Dover. Ignore last week’s result, though; he wrecked out of the race through no fault of his own and his car caught fire. But at Richmond, Busch ended 13th after notching 27 fastest laps, totaling 46.2 DraftKings points. He also finished 15th at Phoenix and eighth at Homestead; unfortunately, the former did not result in a high fantasy score on DraftKings, as Busch began 12th.

As far as Dover goes, the No. 1 Chip Ganassi Racing driver has one victory at the Monster Mile. However, that was 10 years ago in his final year with Team Penske, and CGR isn’t quite as fast as his previous teams. Still, Busch has two top fives and three top 10s in the last six Dover events. Last year, he jumped 15 spots from where he began in 28th, a far greater result than his first race of that weekend (last after crashing out on lap 6). If Busch can once again finish in the teens after qualifying 28th, that should produce a nice fantasy score on DraftKings.

Thanks to Newman’s 10th-place finish last week at Darlington, he’ll begin 13th this week at Dover. Newman still could be worth playing, though; he ended 13th at Atlanta and seventh at Homestead — both abrasive tracks. Those results churned out 45.5 and 54.4 fantasy points, respectively, on DraftKings. Granted, Newman began each race in the 20s but they were still good performances for the No. 6 Roush Fenway Racing wheelman.

Newman’s earned three victories at Dover, though all came from his early years driving for Roger Penske. Recently, he’s really struggled to earn a good finish there, as his last top-five result was in the spring 2017 race. Newman does have two top 20s at the Monster Mile since he joined RFR.

Though he hasn’t achieved the results he’d like at Dover, Newman could still get a good DraftKings score if he applies what he learned at Atlanta and Homestead to this abrasive track.

Suarez is so inexpensive for his starting position (24th). I’m not sure why his salary is this low, but you should take advantage of that. He ended 16th at Richmond after beginning 27th and earned 38.5 DraftKings points. The week prior, he crashed out in The Big One at Martinsville Speedway, but not before notching 34 fastest laps. Unfortunately, Suarez didn’t have the same kind of speed at Darlington last week, but I still believe he can bounce back with a good finish at the Monster Mile.

Since joining the Cup Series in 2017, Suarez has progressively gotten worse in almost every Dover event. His two years with JGR were the only times he nabbed top 10s, finishing in 11th and 14th in 2019 for Stewart-Haas Racing. Last year was different, though, as he drove for Gaunt Brothers Racing — an underfunded team. He now drives the No. 99 car of Trackhouse Racing, which has found some speed in many events this year. If Suarez is able to get some fast laps this week and finish inside the top 10 or 15, his DraftKings total would be high for this salary.

You know, I think this is the first time I chose a Rick Ware Racing driver on a track that isn’t a superspeedway. Why? Well, Davison had a notable result on a smaller track about a month ago. At Martinsville, he gained 15 positions to end 22nd. Of course, that was mostly because he avoided a large crash during the race that brought out the red flag. Still, he stayed out of harm’s way and earned his best career Cup finish. If such an incident happened ahead of him on Sunday, he would score well on DraftKings.

Additionally, Davison drove his No. 15 to a greater position in five of seven events this season. Three of these resulted in just over 10 DraftKings points; however, he totaled 35 fantasy points in his first race of the year at the Daytona International Speedway road course. Although that is a far different racetrack than Dover, it was still admirable for the equipment he’s driving each week.

Davison’s slated to start 33rd and could end in the 20s if he avoids trouble.